By Emily Donaldson on June 28, 2017 The Dusty Bookcase 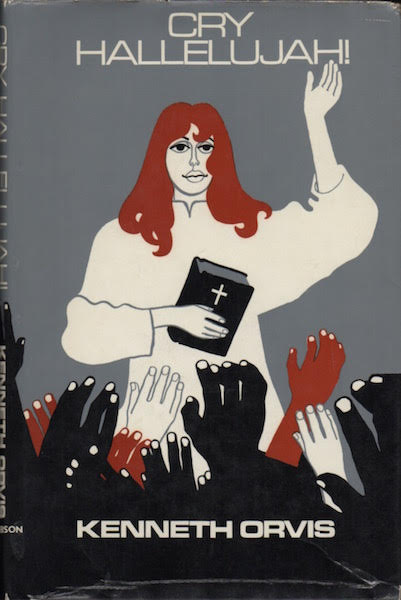 The big thing now is espionage. Readers can’t seem to get enough of it. Sales of spy-thrillers, Fleming’s, Leighton’s [sic]and LeCarré’s [sic] books are smashing international records. My considered advice is: get on the espionage bandwagon—fast!

–Herbert van Thal, quoted in Kenneth Orvis’s
Over the Table and Under (Montreal: Optimum, 1985)

Kenneth Orvis really liked the idea of being a novelist, but wasn’t nearly so keen about writing novels. This is one of the things I took away from the Montrealer’s 1985 memoir, Over the Table and Under: The Anatomy of an Alcoholic. If that book is to be believed—and there are plenty of reasons why it shouldn’t—Orvis left home as a teen to take a job writing for a Toronto-based trade paper, and soon graduated to newspapers. “Many fine novelists had trained on newspapers,” he notes, by way of explanation. This is true, of course, but this apprenticeship appears to have been much longer than most; Orvis was well into his thirties before he began work on his first novel, Hickory House. Published in 1956, he describes the book as a great success, as it brought him a certain level of fame and a good number of copywriting gigs. What Orvis doesn’t share is that it was a cheap Harlequin paperback, and disappeared after just one printing. My copy is the only one I’ve ever seen. 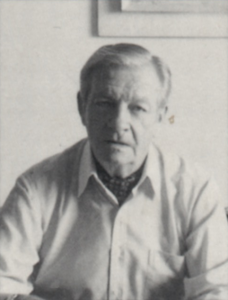 I haven’t been nearly so lucky with the novel Orvis describes as his second, a “blockbuster” titled Walk Alone (aka I Walk Alone), and have come to the conclusion that it simply does not exist. That said, his true second, The Damned and the Destroyed (1962), really was a blockbuster—at least when compared to other Orvis books. A novel about the Montreal drug trade, it was published in hardcover by McClelland & Stewart, Dennis Dobson, and Coward-McCann; mass-market editions from Digit and Belmont followed. The novel is available today as an eBook with a foreword by Lee Child, perhaps its greatest champion. 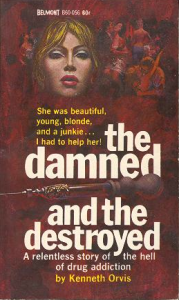 According to Orvis, with The Damned and the Destroyed he’d reached such heights that the need for an agent could no longer be ignored. It was at this time that he met and began to be represented by Herbert van Thal, who advised Orvis to “get on the espionage bandwagon—fast!” He did just that with his next, Night without Darkness (1965), a Cold War thriller about the kidnapping of a scientist by a Communist militant.

There was pressure for a quick follow-up—”another boobs-and-bullets opus before the first was forgotten”—but it was slow to come. Drink played its part in the delay, but then so did love. He’d met a woman named Marjorie, whom he describes as his second wife (I have reason to believe she was his third). In his memoir, Orvis describes an evening in which they go to see Billy Graham at Madison Square Garden, “partly out of curiosity and partly, I suspected, because Marjorie was justifiably certain no booze would be available at that type of bash.” 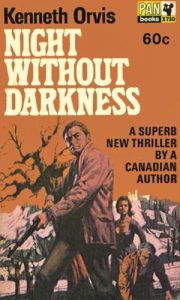 Orvis wasn’t among the saved that night, but the spectacle did change his life in that he became obsessed with evangelists and evangelism. Five years after Night without Darkness, the author delivered Cry Hallelujah!, a novel his publishers didn’t want. Had it not been for Englishman Dennis Dobson, the only one who could be convinced to issue the thing, I doubt I’d have ever had the opportunity to read it. While I can’t say I’m grateful, tackling its 173 pages was worth the effort.

For all the energy and research put into it, Cry Hallelujah! tells a rather conventional story. Its protagonist, a young woman known only as Hallelujah, rises from preaching in a run-down Greenwich Village revival hall to filling football stadiums in the American South. Her journey is aided by a New York newspaperman, a gold-hearted prostitute-turned-choirmaster, and a Madison Avenue wunderkind. As Hallelujah’s popularity increases, her message becomes more radical, and politicians and businessmen grow anxious. They turn to the newspaperman, who turns Judas, and works to take her down.

There are problems with Cry Hallelujah!, the greatest being dialogue. The reader is told repeatedly that those attending Hallelujah’s revival meetings are captivated and mesmerized, but on the printed page her words lie flat:

So Love is the way to Salvation. The broad highroad to Peace, Freedom and Serenity. Just as Love’s opposites, Bigotry, Prejudice, Indifference, Smugness and Lack of Understanding are the shouldering guideposts marking the route to Hell—the Hell we suffer right on this earth.

Off-stage, Hallelujah speaks like a prim and proper spinster. I was forever reminding myself the character was twenty-three years old.

I think Cry Hallelujah! was hurt when Orvis was cut adrift by his New York publisher; given the topic, the novel would’ve benefitted from an American editor. It goes without saying that by far the strongest market for the novel was in the United States. In the end, there was no second printing of Dobson’s lone edition, nor was there a paperback reissue. Orvis puts it more succinctly: “the new book bombed.”

With the failure of Cry Hallelujah!, Orvis was quick to return to thrillers—Into a Dark Mirror (1971), The Disinherited (1974), and The Doomsday List (1974)—but the damage had been done. Every one of them was published in the United Kingdom only. There were no second printings. There were no paperback reissues.

In his memoir, Orvis writes that he lost the will to write more novels. This could be true, I suppose, but it’s just as likely that the British finally joined their Canadian and American counterparts in giving up on the man. Whatever the real story, I’m willing to bet that drink, again, played a role.

Over the Table and Under came eleven years after Orvis’s last thriller. Did he have any fans to notice? His most obscure, unattractive, and poorly edited title, it holds the distinction of being the author’s last published writing. “Mr. Orvis is currently working on a new novel in Montreal which is once again his home base,” reads the author’s bio.

On the other hand, it probably doesn’t exist. I doubt it ever did.