By Meghan Desjardins on August 28, 2020 The Dusty Bookcase 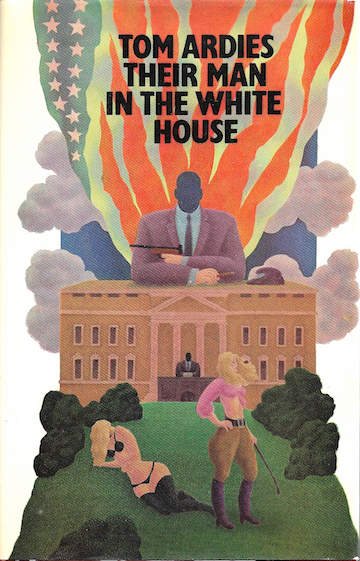 Their Man in the White House
by Tom Ardies Toronto: McClelland & Stewart, 1971; 198 pages.

One of the wealthiest men in the United States is running for the presidency, and intelligence agencies are concerned because Russian operatives are exercising influence. Do they have something on him? Does blackmail play a part? And what are we to make of the peculiar relationship between the candidate and his blonde adult daughter?

Enter Charlie Sparrow, a newspaper and magazine stringer who supplements his writing income with occasional work for CI-2, the most secretive of all American intelligence agencies. For this assignment, the agency provides a crazy-looking, remarkably spacious gypsy caravan built on the flatbed of an old Dodge truck. Sparrow drives the cumbersome thing to the outskirts of Alamos, the quaint Mexican town in which Davis Berwick Marshall, the presidential candidate, has his rural retreat. CI-2’s hope is that Sparrow’s offbeat living accommodations will attract Marshall’s attention, and that the wealthy candidate will become curious about its inhabitant.

Sparrow is meant to pass himself off as a stereotype: a journalist with grand literary aspirations. To this end, Morley, the M at CI-2, has given him an unpublished novel written by “one of the best craftsmen in the business.” Sparrow spends most of his time in the caravan pretending to write, and spoon-feeds pages of the manuscript to Marshall whenever the candidate stops by. Must be one hell of a story, because Marshall visits each and every day. The agency’s plan involves the candidate coming to consider Sparrow an extremely talented wordsmith, which in turn will lead to Sparrow being offered the position of senior speechwriter for the campaign.

On one of these visits, Marshall makes a point of bringing along his daughter Lisa, who has only just arrived from the United States. “This is the little lady I’ve been bragging about,” he tells Sparrow. Marshall has been going on for some time about his daughter’s good looks, and seeing her in the flesh, our hero can’t help but agree with Daddy’s opinion. 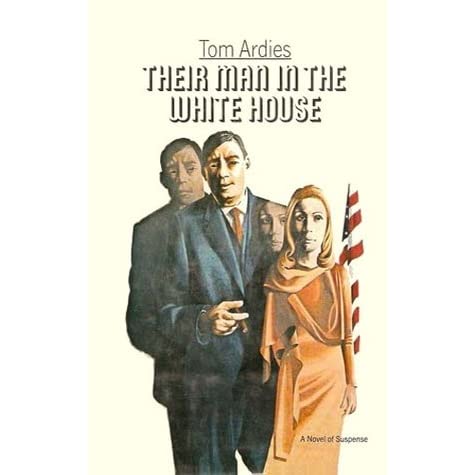 Marshall pushes Lisa on Sparrow, hoping the two will marry—or at the very least announce their engagement—before the election. “Let’s say I don’t relish the idea of her running around single while I’m campaigning for the presidency,” he tells our hero.

CI-2 informs Sparrow that Lisa Marshall was once engaged to a military man who shipped out to Vietnam and was subsequently killed. If the file is correct, Lisa’s been on something of a sexual bender since her betrothed’s death. Though none of this has made the tabloids, it is of great concern to the campaign. It’s at this point that Sparrow learns he was handpicked for the assignment because of his striking resemblance to the dead fiancé. CI-2’s hope is that Lisa has a type.

Seems a bit of a long shot, but it works; and it has to work for the plot to work.

A thoroughly soused Lisa storms the gypsy caravan and throws herself on Sparrow. In the resulting wrestle, our hero discovers that she is—or, rather, was—a virgin.

Sparrow isn’t believed when he dutifully reports this, um, finding to CI-2. Frankly, I didn’t know whether to believe him either. Their Man in the White House is a Cold War thriller, and, as with the best of the subgenre, it’s best to remain skeptical. Sparrow has a habit of keeping things to himself, so why share this? No one is forthcoming, cynicism reigns, and nearly every character is pretending to be someone else. That it’s difficult to know just who is telling the truth, or telling what they believe to be the truth, is to the author’s credit. Everybody lies and everybody keeps secrets, even from those working for their side of the Iron Curtain.

In the end, this reader came to trust Sparrow over Morley, Lisa, and Davis Berwick Marshall. I don’t think the confidence was misplaced. I spoil little in revealing that he fails to prevent Russian infiltration of the White House.

Did he? CI-2 thinks he was successful.

A newspaper and magazine writer himself, Tom Ardies wrote a total of ten novels, Their Man in the White House being the first. He’s best remembered for 1974’s Kosygin Is Coming, another Cold War thriller, which was adapted to the screen the following year as Russian Roulette, starring George Segal. The film doesn’t do the novel justice, but is recommended if only to marvel at director Lou Lombardo’s (P.K. and the Kid) talent in making Vancouver out to be the ugliest city in Canada. Ardies’ career is neatly divided in two parts; in the first, spanning 1971 to 1976, he wrote thrillers under his own name. In the second, running from Balboa Firefly (1994) to La Jolla Spindrift (1998), he published under the pseudonym “Jack Trolly.”

Charlie Sparrow was Ardies’ only series character. Though he’s pretty much destroyed by the events of Their Man in the White House, Sparrow bounces back in This Suitcase Is Going to Explode (1972). The CI-2 operative is last seen in the closing pages of Pandemic (1973), a thriller concerning a deranged millionaire who threatens to unleash a deadly virus upon the world.

Did the man who failed to block the Russians from the White House succeed in preventing a pandemic?

I put my faith in Sparrow.