Alberto Manguel is a well-respected figure in Canadian and Argentinian letters. I’ve always enjoyed hearing him speak on CBC Radio; last year’s Ideas two-parter, “Borges’ Buenos Aires: The Imaginary City,” is recommended listening. Manguel has a precise manner of speech, which, combined with his previous position as director of the National Library of Argentina, has led me to think of him as a meticulous man. So why is this 1991 anthology such a dog’s breakfast?

The table of contents provides the first clue: 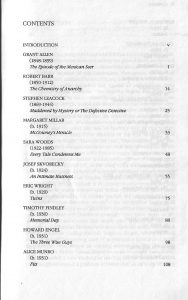 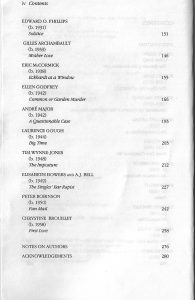 Note the forty-six-year gap between the births of Stephen Leacock and Margaret Millar. Note also that the majority of authors were born in the thirties and forties; three in 1931 alone.

Next, consider Manguel’s introduction. The first of its three-and-a-bit pages is an overview of the evolution of “the detective story—a.k.a mystery, thriller, whodunnit.” All the expected touchstones are there: Edgar Allen Poe, Wilkie Collins, The Mystery of Edmund Drood and Sir Arthur Conan Doyle. It ends with a leap, noting that Doyle’s last Sherlock Holmes story was published the very same year as Agatha Christie’s The Murder of Roger Ackroyd, thereby heralding the dawn of the “golden era of the mystery story.”

“In Canada, the development of the genre was slower and frankly derivative of the British model,” Manguel writes. He allows that “in the English-Canadian provinces and Quebec there are early examples of popular fiction that can, up to a point, be classified as ‘mystery stories,’” but adds, “at the time these texts lacked a public in the reading method required by the genre”; an odd assertion, given the popularity of Poe, Collins, Dickens, and Doyle amongst those very same Canadian readers.

Manguel’s opinion of early Canadian mysteries is equally dismissive. He mentions only three—fleetingly—relying on others in doing so:

The De Mille and Le May mysteries do not feature in Canadian Mystery Stories, nor does the de Boucherville. This last omission is remarkable when one considers that “La Tour de Trafalgar” pre-dates the Poe stories that Manguel cites as the earliest in the genre. The discrepancy is not addressed.

The oldest “story” in this anthology, “The Episode of the Mexican Seer,” is in fact the first chapter in Grant Allen’s novel An African Millionaire (1897). The second, “The Chemistry of Anarchy” (1894), by Robert Barr, is not a mystery at all. One of the author’s comedic stories, it concerns a man’s successful effort to frighten a league of anarchists. An example of Barr at his finest, it has aged well, but one wonders what it’s doing here, particularly when one considers his Eugène Valmont detective stories and the mysteries included in his 1896 collection Revenge! Stephen Leacock’s much-anthologized satire “Maddened by Mystery or the Defective Detective”(1911) is next, after which Manguel moves on to Margaret Millar’s “McGowney’s Miracle” (1954). In doing so, he turns a blind eye to W.A. Fraser, Alan Sullivan, Arthur Stringer, Frank L. Packard, Vincent Starrett, H. Bedford-Jones, Frances Shelley Wees, and Kenneth Millar (a.k.a. Ross MacDonald). No explanation is offered for these exclusions—and not one of these authors is recognized in the introduction—so I’m left only to speculate that it may have something to do with the spreading of this falsehood from Malcolm Douglas (Books in Canada, “Blood on the Snow,” June-July 1988), which Manguel quotes:

Canada has always had its fair share of murder, arson, robbery, assault, fraud and assorted other crimes. We’ve even had the occasional case of espionage. But despite all this bona fide criminal activity, Canada until the 1970s was empty as a Liberal gathering in Alberta when it came to crime fiction.

This is no more true than Manguel’s contention that Allen and Barr never set their stories in Canada. Still, the anthologist runs with it, writing that “in the following years, the genre seemed to take root and flourish.” Credit, he says, goes to writers like Hugh MacLennan, Margaret Laurence, and Robertson Davies for tilling the soil, making us aware that Canada is “a place of mystery—the country of Manawaka and Deptford.” To prove himself right, sixteen of the twenty stories the anthologist selects for Canadian Mystery Stories were written in the twenty years leading to its 1991 publication. Some take place in Canada; some do not. One of the very best is Gilles Archambault’s “Mother Love” (“Amour maternel“), in which a gigolo is dispatched to New Orleans with the task of retrieving an estranged son. Archambault has a great talent for writing dialogue, and translator Sally Livingston tackles the colloquialisms with ease. Less effective is Timothy Findley’s “Memorial Day,” concerning a landscape architect who is commissioned to redesign a family estate in Cambridge, Massachusetts.

There is a small mystery at the heart of Findley’s story; which cannot be said for “Mother Love.” In fact, most of the selections in Canadian Mystery Stories aren’t mystery stories at all. “Big Time,” by Lawrence Gough, is the straightforward tale of a couple of crooks who plan an armed-car robbery, only to be betrayed by a publicity-seeking girlfriend. Alice Munro’s “Fits” involves a murder-suicide and its impact on the family living next door. In Chrystine Brouillet’s “First Love” (“Premier amour“), another Livingston translation, the reader is carried along as a Catholic schoolgirl’s secret crush on a male teacher culminates in the murder of a nun. There are no suspects; the crimes need no solving.

“Riddles are at the core of most fiction,” Manguel writes at the end of his introduction. “Nothing carries a reader from page to page with more force than a question—especially a question whose answer seems unobtainable, but isn’t; seems mad, but is, on close inspection, quite reasonable. Because of this, the detective story will continue, in whatever guise it may take in the future, to serve the purpose of giving confidence in the ultimate sanity of the universe.”

Not all of Manguel’s selections tie-up quite so neatly as he suggests. And then there’s that use of the “detective story,” again. Anyone at all familiar with the sub-genre knows that the detective story is not “a.k.a. mystery, thriller, whodunnit,” as is stated earlier in the introduction. It’s an amateur’s mistake. That a majority of stories in this anthology do not feature a detective and require no detection skills should have provided the anthologist with a clue that more investigation was warranted.

This is not to say that Alberto Manguel didn’t have help; the introduction is followed by the book’s acknowledgements. Professor Hare is recognized for “unofficial research,” as is J.D. Singh, co-proprietor of the Toronto mystery bookstore Sleuth of Baker Street. Margaret Cannon, Canada’s Grand Dame of mystery critics, is thanked for her “guidance.”

So, why the mess of kibble, dog drool, and unwanted scrambled eggs?

I point out that Canadian Mystery Stories is Alberto Manguel’s eleventh anthology. In the eight years that followed his first, Black Water: The Book of Fantastic Literature (1983), he came to dominate the field. In 1991, as in the decade that followed—he edited four anthologies in 1998 alone—when it came to anthologizing, Manguel was the go-to guy.

Professor Hare would clearly have been a better choice, but I suppose he didn’t have the name recognition.