By Emily Donaldson on September 12, 2018 The Dusty Bookcase 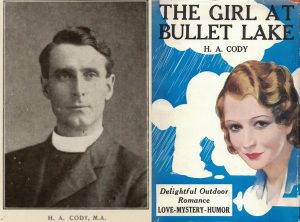 Even in 1933, the beginning of The Girl at Bullet Lake must’ve seemed a tired cliché. An exhausted young man sits in doctor’s office and is prescribed restorative rest away from the city. “But where am I to go?” asks the patient, Robert Rutledge. His doctor, Bradbury, knows just the place:

“Bullet Lake will do you fine. And there is a snug house on the shore, known as ‘Bullet House.’ It is not a very poetical name, I admit, but that will make no difference, Si Acres will charge you something, but it will be worth it. There is excellent fishing there, too.”

“Where is this wonderful paradise, doctor?”

“It is not far away, only a few miles back from the river at Glengrow. You surely must know the place.”

“I know Glengrow, for my sister lives there.”

Robert leaves the office intent on following the physician’s advice. He walks the streets of the city of Pretensia and stops for a lonely lunch at the White Lily Café. A beauty measuring up to his “ideal standard of perfect womanhood” is seated at a nearby table. Mrs Augustus Rockbridge sits at an even closer table, and he cannot help but listen in on the conversation she’s having with a friend. Mrs Rockbridge is not only married to the editor of the Pretensia Daily Echo, to which Robert, a poet, contributes verse, she is also a prominent member of the congregation of St Alban’s Church. Reverend Andrew Nairn, Robert’s brother-in-law, the one married to the sister in Glengrow, is almost certain to be installed as the church’s new rector. However, Mrs Rockbridge prefers her nephew for the position, and announces her plans to travel to Glengrow in order to gather dirt on the clergyman and his wife.

Robert arrives in Glengrow ahead of Mrs Rockbridge. His meeting with Si Acres, the curmudgeonly owner of Bullet House, goes very well when the latter learns that Robert is the grandson of his best friend, John Rutledge. The revelation encourages Acres to reconsider his tempestuous relationship with Robert’s sister, who is Reverend Nairn’s wife.

Before Robert is truly settled into Bullet House, Joan Rowland, the “ideal standard of perfect womanhood” he saw in the White Lily Café, arrives in Glengrow. She’s interested in doing a painting of Bullet House, which was built by her grandparents, who subsequently lost everything after their betrayal by a false friend. This secret of her relationship with the house is one she keeps to herself, though Acres figures it out. His own secret is that he was once engaged to Miss Rowland’s grandmother.

The old man also holds onto the identity of the false friend, who turns out to be Mrs Rockbridge’s father, who built a great fortune on their misfortune. On one of his rare trips into Pretensia, Acres visits an unnamed restaurant. Might it be the same restaurant, the Lily White Café, where Robert overheard Mrs Rockbridge talk about her scheme against his sister and bother-in-law? It’s a question worth asking because Acres finds himself seated at a table neighbouring Mr Rockbridge, and overhears the Daily Echo editor telling a luncheon companion of the very same scheme. This takes place shortly after Mrs Rockbridge runs over Rev and Mrs Narn’s daughter, Robert’s niece, with her car. It wasn’t intentional—Mrs Rockbridge isn’t quite so villainous—she just happened to be driving by.

One hundred years ago, Anglican minister H.A. Cody was in a crowded field of Canadian clergymen vying for top spot as the Dominion’s bestselling male novelist. In 1909, Publisher’s Weekly had crowned The Inner Shrine by Rev Basil King (Anglican) as the year’s bestselling novel. He very nearly repeated the feat with The Wild Olive (#3 in 1910) and The Street Called Straight (#2 in 1911). Rev Dr Charles William Gordon (Presbyterian)—“Ralph Connor”—didn’t quite reach those heights, though he did produce The Doctor (#9 in 1907), The Major (#7 in 1918), The Sky Pilot in No Man’s Land (#5 in 1919). Rev Robert E. Knowles (Presbyterian) nipped at the competition’s clerical gowns with seven novels, beginning with St Cuthbert’s (1905), before succumbing to shattered nerves and, likely, alcoholism.

Of the seventy or so novels produced by these men, only two, Rev Gordon’s Glengarry School Days (1902) and Rev King’s The High Heart (1917) are in print today, though their names are pretty much forgotten outside the halls of academe. To the reading public, they’re as unfamiliar as the fictitious English novelist Ramona Blemfeld, who features briefly in The Girl at Bullet Lake’s middle section. Miss Blemfeld is on a lecture tour that takes her to Pretensia. Mrs Rockbridge interrupts her investigation of Robert’s sister to serve as hostess. Before the talk, the authoress happens to mention that she once travelled Europe with a young Canadian friend, and is sad that she’s somehow lost contact with her. “I suppose you have never met her?” she says to Mrs Rockbridge. “But that is hardly likely, as this is such a vast country.”

It is indeed a vast country, and it is indeed unlikely that Mrs Rockbridge would have ever met Miss Blemfeld’s Canadian friend. But this is Rev Cody’s Canada, and the friend is, of course, Robert’s sister, now Rev Nairn’s wife. Mrs Rockbridge keeps the information to herself, but this doesn’t prevent a happy reunion of the two old travelling companions. Robert is flattered to learn that Miss Blemfell has been reading one of his poems, “Sea Born,” on her lecture tour:

“But how did you know that I wrote Sea Born?”

“I didn’t until your sister told me last night.”

“I have noticed that many in this country think little of their writers… They often acclaim foreign authors and disparage their own. That should not be so. It is not good to have the inferiority complex. People who consider themselves and their productions, no matter what they might be, inferior to others are not likely to make the progress that they should.”

Canadian writing was indeed inferior in 1933, but am I really hindering progress in describing The Girl at Bullet Lake as substandard? I don’t mean to suggest that Rev Cody’s novel is entirely without value. I found something of interest in this conversation between Mr and Mrs Rockbridge:

“He is a clever writer, and we have used several of his articles. They have been most favorably received and copied by other papers. But confound him, he had the impudence to ask me to pay for his stuff.”

“Quite. To have his articles published in the Echo should be pay enough. It gives a young writer a publicity he could not otherwise obtain.”

Thus is the cause of Robert’s exhaustion revealed.

To borrow from Neil Young: Some things never change / They stay the way they are.