By Emily Donaldson on January 23, 2018 The Dusty Bookcase 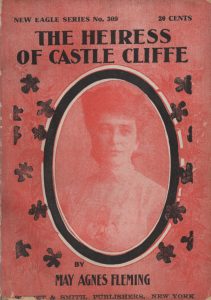 Wedded for pique? I couldn’t imagine what sort of slight would lead to matrimony.

The affront is revealed in the last third of novel, just before an angry, malicious walk down the aisle. It follows a series of great misfortunes and misadventures, and leads to even more, resulting in a murder, a drowning, and a hanging.

To think it all begins with a pleasant evening at the theatre.

In the opening chapter, Mademoiselle Vivia treads the boards of a glittering London stage. It has been only three months since she made her début, but in that short time the French actress has driven the city’s theatregoers half-mad. “Gouty old dukes and apoplectic earls had knelt in dozens at her feet,” yet Vivia spurned them all. Her virtuous nature—by implication, uncommon in the theatre—has made her all the more admired and desired. “Madam Rumor” whispers that this may be Vivia’s farewell performance. Her heart, it is said, has been won by someone just as honourable as her good self, but no one knows exactly whom.

Lieutenant Cliffe Shirley is the man, handsome heir to a vast Sussex estate lying in the shadow of his ancestral family home, imposing Castle Cliffe. The next scene finds Shirley in the unenviable position of having to inform his mother, gorgeous Lady Agnes, that he has married the French actress in secret and so cannot wed the heiress she chose for him. Shirley is disowned on the spot, becoming “a discarded son,” but his love for Vivia is such that he cares not.

Wedded for Pique—The Heiress of Castle Cliffe, if you prefer—is a novel overpopulated by young widows and widowers. Shirley soon joins their number, but not before Vivia gives birth to a baby girl. Distraught over his beautiful wife’s death, bound by military service, he entrusts the infant to a peasant couple and departs to do battle in India, “praying that some friendly bullet will put an end to a miserable existence.” Twelve years pass with the turning of a page, and we learn from disinterested Captain Douglas that Shirley achieved his end “scaling the walls of Monagoola, or some such place.”

This reader was saddened by the news, though the title of the next chapter, “The Prodigal Son,” held some faint hope. Sure enough, Shirley reappears, looking more handsome than ever. This near-miraculous return brings reconciliation between mother and son. Lady Agnes asks his forgiveness, does her best to ignore his “low marriage,” and looks forward to welcoming the granddaughter she never knew existed.

The girl’s arrival at Castle Cliffe, in the midst of a dinner party, takes family and guests aback. It’s not that she’s unattractive, rather that she’s not nearly so captivating as Lady Agnes, and looks nothing like the French actress who brought dukes and earls to their knees. One of the guests compares the girl, to her great disadvantage, with the Infant Venus, a girl tightrope walker captivating the hearts of fairground audiences in much the same way the French actress did London theatregoers. Another of the guests has used blackmail to bring the Infant Venus to nearby Cliftonlea.

But to what purpose?

Fleming’s favourite novelist was Charles Dickens, a contemporary who died just as her career was beginning to take flight. His influence can be seen in intricate plots that rely very much on coincidence. Like her master, Fleming had a talent for creating memorable characters, the best of which can best be described as… well, Dickensian. The Infant Venus stirs the heart, but the one I’ll remember is Sylvester Sweet, Lady Agnes’s solicitor-at-law:

Mr. Sweet was not a handsome man, but he had the most smiling and beaming expression of countenance imaginable. He was of medium size, inclined to be angular and sharp at the joints, with a complexion so yellow as to induce the belief that he was suffering from chronic jaundice. His hair, what there was of it, was much the color of his face, but he had nothing in that line worth speaking of; his eyes were small and twinkling, and generally half closed; and he displayed, like the blooming relic of the late lamented Leicester Cliffe, the sweetest and most ceaseless of smiles.

His waistcoat was of a bright canary tint, much the color of his face and hair; lemon-colored gloves were on his hands; and the yellow necktie stood out in bold relief against the whitest and glossiest of shirt collars. He wore large gold studs, and a large gold breastpin, a large gold watch-chain, with an anchor, and a heart, and a bunch of seals, and a select assortment of similar small articles of jewelry dangling from it, and keeping up a musical tinkle as he walked. He had small gold earrings in his ears, and would have had them in his nose, too, doubtless, if any one had been good enough to set him a precedent.

The influence of Dickens’ life on his art is much studied; not so our May Agnes Fleming. Reading this novel, I made the mistake of thinking the author’s own marriage, a hasty and unhappy union that turned scandalous, in some way informed The Heiress of Castle Cliffe. However, the novel first appeared in 1862, serialized in the pages of New York’s Sunday Mercury, three years before the author met the man who would become her ne’er-do-well husband.

The only marriage depicted in The Heiress of Castle Cliffe is the one made for pique. An unholy match between a greedy man and a spiteful woman, it is every bit as unpleasant as it sounds, and is directly responsible for the novel’s greatest tragedy. Contrast this with many perfectly contented young widows and widowers, none of who display any interest in changing their matrimonial status. The only one to remarry does so to provide a father for her son.

For much of the novel, the closest we come to seeing any married couple together comes when Shirley stands above Vivia’s cooling corpse. 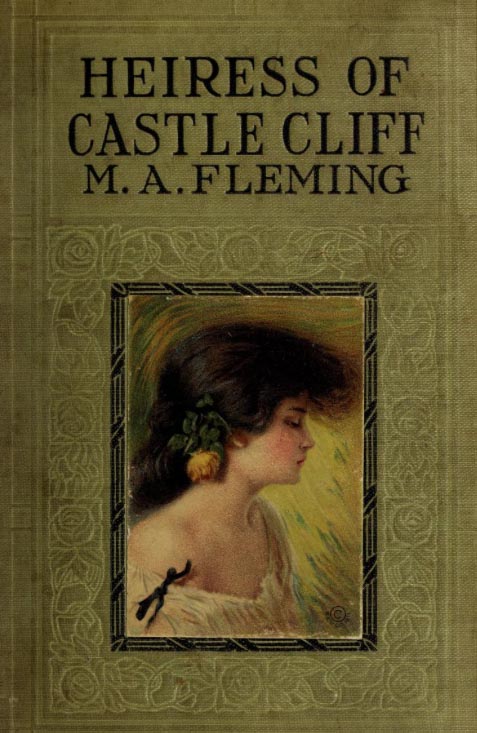 The Heiress of Castle Cliffe has a good deal of unpleasantness, which is not to say there isn’t a happy ending. On the second-to-last page of my Street & Smith edition, two characters marry. On the final page, bride and groom leave on their honeymoon.

Perhaps it’s just as well that Mrs Fleming left things off there.

Object: A flimsy paperbound book printed on cheap newsprint. I took great care in reading the thing, but was not surprised when it began to crumble. It was won at an eBay auction last year. The winning bid was $2.24. I was the only bidder.

Several editions of the novel are available without charge through the Internet Archive, the most interesting being the first edition, Victoria; Or, The Heiress of Castle Cliffe (New York: Brady, 1864), published under the pseudonym Cousin May Carleton. It can be accessed through this link.

Seven of our universities hold copies of one edition or another. Our public libraries fail entirely. At the time of this writing, no copies of any edition were being offered online.