By Emily Donaldson on September 19, 2017 The Dusty Bookcase 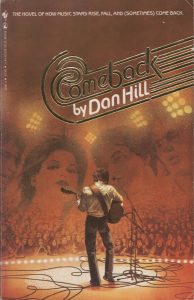 —Dan Hill, “Sometimes When We Touch”

In December 1983, when Comeback was published, Dan Hill was twenty-nine. I was a twenty-one-year-old university student working a part-time job at a suburban Montreal Sam the Record Man. On my breaks, I’d sometimes wander down the mall to W.H. Smith, which is where I first spotted Comeback, Hill’s debut novel. Love in the Shadows, his seventh album, had been released the month previous. We hadn’t sold a copy. From what I could tell, Comeback, an ugly, trade-size paperback described on the cover as “ THE NOVEL OF HOW MUSIC STARS RISE, FALL, AND (SOMETIMES) COME BACK,” looked to be meeting a similar fate. 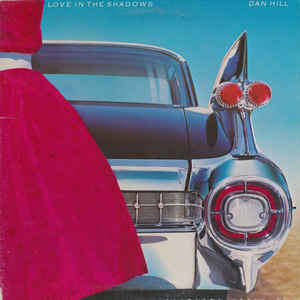 Love in the Shadows’ cover art

It was all so depressing.

For nearly thirty-four years, I took Comeback to be the fantasy of a once-popular musician who dreamed of a return to the charts. Now that I’ve read the novel, I see that it is a nightmare. Comeback opens with the arrest of its protagonist on the charge of statutory rape. The second chapter is a description of the rape itself:

He was still breathing hard. He seemed to be doing something with his hand and then he felt the tip of his penis brush against her.

“I won’t hurt you,” he said, kissing her lightly on the forehead and then on both cheeks. Then he softly touched her face and for an instant she thought he was going to cry.

“All you have to do is relax. Trust me,” he pleaded. She nodded to let him know she did.

I hesitate in describing Comeback as an extraordinary novel because it is not very good; what I mean to say is that it’s unlike anything I’ve read. Let’s begin by recognizing that the author modelled protagonist/rapist, singer/songwriter Cornelius Barnes IV on himself. Like his creator, Barnes achieves fame in his early twenties with a hit considered by some as “the most romantic song of the decade,” but his star soon falls into the gutter. Now pushing thirty, it’s been five years since his last hit, and Barnes is without a recording contract. The other characters of note come from the author’s life: Cornelius Barnes III is modelled on his father, Daniel Hill III. Timothy Reynolds, Barnes’ high school friend and musical collaborator, is based on music producer Matthew McCauley. Timothy’s father bankrolls Barnes’ first album, just as McCauley’s did for Hill. Bernie Fiedler, owner of the legendary Riverboat Coffee House, plays himself.

“Write what you know”isn’t the worst advice, which is not to say that one need use everything one knows. John Glassco once criticized American expatriate writer Robert McAlmon for including things in his fiction simply because they’d happened. The same charge might be levelled against Dan Hill. Comeback rambles, seemingly without direction, much like life itself. This novel isn’t really about a singer/songwriter’s return to charts—and it doesn’t have as much as one might expect about Barnes’ arrest and trial—it’s more about how Hill came to top those charts in the first place. And so we trudge through teenage jam sessions in the Reynolds’ family basement, early gigs at the Riverboat, and a dense thirty pages devoted to the financing and recording of Barnes’ breakout album. 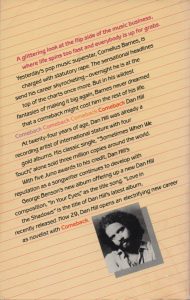 There’s a remarkable degree of self-loathing in Barnes’ journey, nearly all of it having to do with his addiction to groupies. Hill expresses something similar in I Am My Father’s Son: A Memoir of Love and Forgiveness (2009), his only other book. In the novel, the encounters lead to arrest, conviction, and incarceration.

Like Love in the Shadows, the album I couldn’t and wouldn’t sell, Comeback bombed —the first printing was its last—but expectations were high. “Now 29, Dan Hill opens an electrifying new career as novelist with Comeback,” reads the book’s back cover. The author bio on the last page assures the reader that Hill “continues to write fiction and is working on new material.”

More than three decades have passed since those visits to W.H. Smith, and we’re still awaiting Dan Hill’s second novel.