By Emily Donaldson on July 4, 2018 The Dusty Bookcase 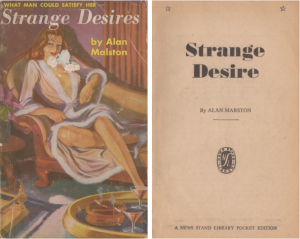 Strange Desires [?]
Alan Malston [?]
Toronto: News Stand Library. 1949
160 pages
The title of this novel is either Strange Desires or Strange Desire. It doesn’t matter which because “Strange” is key. Anyone familiar with post-war paperbacks will recognize the word as code for “lesbian” fiction. Delicate lingerie, gentle caresses, and tender kisses will feature. An insecure, vulnerable, and somewhat unstable young woman (more often than not a blonde) will likely be seduced by a confident, slightly older woman (usually brunette). The young woman will become increasingly insecure, vulnerable, and unstable as a result, until finding safe harbour in the arms of a man. The slightly older brunette may or may not commit suicide.

Those unfamiliar with that code word in 1949 would’ve been aided by the cover pitch: “WHAT MAN COULD SATISFY HER — STRANGE DESIRES.” But for the truly dim-witted, everything is laid out in the back cover copy:

Adele was sophisticated, spoiled and reckless, and her inspired strip dance performed with a snake as partner set men’s blood pounding and women’s tongues to wagging.
Her inseparable female companion seemingly did not quench Adele’s desire for the conquest of men and for the one man in particular who seemed capable of resisting every trick and every charm.

A pill-popping American beauty, Adele anticipates Anna Nicole Smith. She makes her appearance on the first page as the newly minted widow of filthy-rich dirty old man Alf Hermann. Where Smith’s husband invested with the Koch brothers, Hermann’s business dealings were with the Nazis.

For reasons not shared with the reader, upon Hermann’s death the wealthy widow decamps to Brussels. My guess, influenced by the back cover copy, is that the move has something to do with Bill Daines, “the one man in particular who seemed capable of resisting every trick and turn.” Bill is a member of Brussels’ Nomads Club, though as a special agent in the Foreign Office, he’s rarely in the city. Bill’s job calls for “a complete abrogation of emotional contacts,” which isn’t at all challenging because he views “girls with polite indifference.”

His relations with her were on a footing of cordial camaraderie that threatened to secure more intimate proportions. Bill was uncomfortably aware that Adele was a young woman who lived vitally and whose code was sufficiently elastic to enable her to take what she wanted without particular reference to proprieties.

Bill last saw Adele before her marriage. She was getting into a Paris taxicab with French film star Claude Moraine and a mysterious man with a scar: “‘C’mon you two,” said Moraine. “let’s go to the Sphinx — all three of us’ll tumble into the li’l love-nest while madame gets the girls ready….’”

That early mention of the Sphinx—the legendary brothel visited by Colette, Georges Simenon, Henry Miller, and, quite possibly, Eva Braun—together with the drugs, Nazis, special agents, and of course, lesbianism, held promise that Strange Desires (or Strange Desire) might just be the most exciting and sexy of all Canadian post-war pulp novels. This passage, which also comes early, adds to that expectation:

How much more satisfying it would be, if this man she was evolving, could be, in addition to his culture and wit and ardour, be endowed with the more subtle attributes of Woman! She thought of the vivacious Mariette there in the villa, ministering skilfully to her every mood. She thought of that tall dark Polish woman, the Markovna, who’d been at the Russian Cabaret the first time she’d seen Daines and in whose dark eyes, almost insolent in her serenity, lurked such depths of passion.

That line about the “serpent that once corrupted man” comes from Blade Runner; I include it because there’s nothing more worth quoting from Strange Desires. Both the cover copy and early pages turn out to be a tease; lesbianism is not in evidence, Nazis do not figure, Adele pops just one more pill, and special agent Bill Daines turns out to be not so special after all. The bulk of the novel—140 of its 160 pages—is consumed by gossip, small talk, and plans to visit, play golf, attend the theatre or dine with this or that person:

“Hello there, Red my boy,” he said. And when drinks arrived he went on, “we’ve got some new arrivals to look us over — a couple of girls, Red.”

“You can take your choice, old man,” Eric laughed. There’s a red-head and a brunette.”

Red Jackson grunted. “You and your women, Tadpole. Look, I want you to play golf this afternoon. He took the chair and turned to the Judge. “And it’s a jolly smart tie, this, eh sir?”

Happy at the prospect of another drink, the president smiled. “It’s a peach, my boy.”

“Thank you sir. Now Tadpole, what about that golf? We’re booked for a foursome at the coast, and the way you’re putting now, we haven’t got a chance.”

A welcome respite is provided by a fleeting subplot involving a man named Paul Andrews, who, like Adele, married for money. Conditions in his dead wife’s will call for him to promote the writings of a holy man named Bruun. Andrews sees an escape from this hell in his pursuit of another wealthy wife. Sadly, his efforts amount to nought, and we’re soon back to this:

“Are you going to play bridge tonight, Arabella?” Adele asked at length and Mrs. Steyn shook her head.

Mariette broke in. “I am taking madame to the pictures,” she said loftily. “It is about Egypt, and they have many fine men there.”

“I’ve seen that picture,” Adele said. “Is Pe-taire coming with you?”

Mamzelle pouted. “He is preparing his discours for Sunday, he tell me.”

“What about you child?” Arabella asked of the widow.

“Oh, I have half-a-dozen books to read, and tonight I shall probably look in at the casino.”

“We must dine early, Arabella,” Mariette said. “The cinema begins at half-past seven.”

“You two go along,” Adele said.

And so on to the final page, in which Adele and Bill meet unexpectedly at a nightclub. They share a dance, and then leave.

Strange Desires is one of the most unusual Canadian novel I’ve ever read, but that doesn’t save it from being the most boring.

Credit for this achievement goes to either Alan Malston or Alan Marston.