By Emily Donaldson on August 9, 2022 The Dusty Bookcase 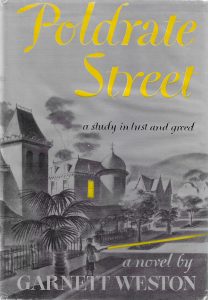 Garnett Weston once described writing as the easiest racket going. He was a grocery clerk, shoe salesman, lumberjack, journalist, editor, and fish cannery worker, but I think it a safe bet that he made most of his money as a screenwriter. A Toronto boy, born in 1890, educated at the University of Toronto and the Royal Naval Academy, he got his first job in Hollywood mowing lawns. Within three years, Weston earned his first screen credit adapting and writing the cards for the 1927 silent-era seafaring adventure Yankee Clipper. He wrote or otherwise contributed to twenty-four films in total, including three in the popular Bulldog Drummond series.

Weston is remembered—or should be remembered—for three remarkable movies, the earliest being White Zombie, for which he wrote the story and dialogue. A 1932 production starring Béla Lugosi, it holds the distinction of being the first feature-length zombie film. It was followed the next year by Supernatural, a pre-code movie that begins with the trial and execution of a woman who “killed three of her lovers in a wild orgy.” Through a scientific experiment on the murderess’ corpse, her evil finds a new home in innocent Roma Courtney, played by Carole Lombard, which is when the terror truly begins. White Zombie and Supernatural deal heavily in religion and the occult, but not Daughter of Shanghai (1937), for which Weston wrote the story and co-wrote the screenplay. The plot revolves around efforts to expose a human smuggling ring operating out of China. Unique for its time, it stars Asian Americans playing Asian Americans. Anna May Wong plays Lan Ying Lin, a young woman who is determined to bring the smugglers to justice. She does so with the aid of FBI agent Kim Lee (Philip Ahn). There’s not a stereotype in sight. When exposed, the villains prove to be Caucasians.

I hesitate in describing Daughter of Shanghai as Garnett Weston’s greatest achievement only because I’m still making my way through his books. His first, a novel titled Murder on Shadow Island (1933), holds interest as a mystery that takes place in the Thousand Islands. Legacy of Fear is every bit as unique in being a violent 1950 thriller set off the coast of British Columbia. In both we see the curious thread that runs through nearly all Garnett Weston novels: inheritances and plots to deprive their beneficiaries. 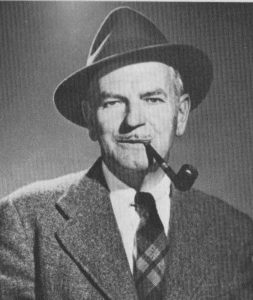 Of the Weston books I’ve read to date, Poldrate Street (1944) is by far the best. The titular thoroughfare isn’t a thoroughfare at all, rather a cul-de-sac consisting of just five houses. Like other Weston novels, it is crammed with characters; so many that the reader risks being confused.

I’ve come to wonder whether this might explain the author’s habit of giving his creations memorable names. Here we have Kitty MacKay, Jacob Sleep, and Dr Ivar Palling, to name just three. Undertaker Mafia Breene operates a funeral home in a Victorian house at the end of the block. Nineteen-year-old Kitty is unaware that she is due to inherit a sizable amount of money from her grandmother. She lives with elderly, frail Sleep, who wants the fortune for himself. Palling and Breene, who have discovered the old man’s contrivance, look to take the money for themselves. To this end, they develop a scheme in which young Kitty will be declared dead and buried. She’ll be dug up later, after which Breene will carry her off to a mountain cabin at which she’ll become his love slave. Will Palling’s wife, nymphomaniac Violet, miss the undertaker? After all, the two have been carrying on an affair. No, she’s already set her sights on amateur boxer Jimmie Lane, the nephew of Sarah Reckon, whom her husband murdered in the opening chapter. The most innocent character, a pre-adolescent boy nicknamed “Face,” is a voyeur who scrambles up a tree to catch a glimpse of Kitty undressing.

Poldrate Street is one of the darkest and most enjoyable Canadian novels of the mid-twentieth-century. A Kirkus review (April 10, 1944) concludes: “A grisly piece with a rather unpleasant aftertaste.”

It’s all that and more!

Poldrate Street was written in the months after Weston left Hollywood. He returned to Canada, settling in Graymar, a home he’d built in the twenties on Vancouver Island. There, the former shoe salesman turned into a poultry farmer and horse-breeder. A few more novels followed—Legacy of Fear being one. It was at Graymar that Weston died in 1980, at the age of ninety.

Garnett Weston’s last book—self-published—is Death Is a Private Affair (1970). An elegant volume bound in bland brown boards, it gathers verse and aphorisms dating back to his days as a young man at the Royal Naval Academy. “If you have to tell them who you are—you ain’t!” is a favourite.

Death Is a Private Affair begins with a list of fourteen previous books, most of which weren’t books at all. Amongst the titles we find Against the Tide, co-authored with Alan Hustwick, which amounted to no more than a couple of dozen pages in Complete Story Magazine (December 10, 1920). Mounted Patrol was a two-part Saturday Evening Post serial (April 7 & 14, 1951). Remittance Girl was published in the Star Weekly (January 17, 1958). Other titles, like What Became of Dorian Dana?, remain mysteries. There’s no evidence they were ever published. Their manuscripts, presuming they exist or existed, aren’t found amongst his papers.

One last fiction, I suppose.

All part of the racket.