A lecture delivered as the “Immortal Memory” address at DaPoPo Theatre’s “Not Quite Burns Night,” January 24, 2020, in Kjipuktuk/Halifax. 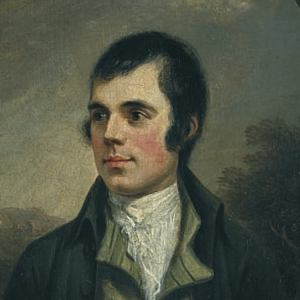 I first encountered Robert Burns not as the Bard of Ayrshire, nor as the People’s Poet, nor (as the wonderful epithet has it) as the “heaven-taught plowman,” but rather—and rather dryly—as exhibit A in the definition of simile which appears in a classic scholar’s primer, M H Abrams’ Glossary of Literary Terms.

Now a simile, as every schoolgirl knows, is a comparison asserted using the word “like” or “as.” The classic example that Abrams gives, blithely Englishing Burns’ word luve, is the first line of a song that Burns collected, apparently from “a country girl” (and who knows what else he may have collected from her?) and passed along to the Edinburgh musician Pietro Urbani in 1793: “O my love’s like a red red rose.”

We will get back to metaphor. For now, let us return to simile.

What does it mean to be “like” something? To resemble it? To take after it?

“Is it not like the king?” says Marcellus to Hamlet, of Hamlet’s father’s ghost.

“As thou art to thyself,” says Hamlet.

“Love thy neighbour as thyself,” we are told in the New Testament—another simile. But—as a priest once pointed out to me—this doesn’t mean very much if we don’t like ourselves, in the first place.

But surely we can be like something, without liking it—without feeling, when we behold it, “our heart overflowing with what is called liking,” to use Burns’ phrase. Surely. God makes man, we are told, in His likeness. But whether He likes man—that is another question.

“A red red Rose” is one of the great love songs in the English (perhaps I should say the Scottish) language. But what are the great like songs?

Central in the canon, for me, is Sancho Panza’s beautiful ode to Don Quixote, in the musical Man of La Mancha:

“Why do you follow him?” Aldanza asks the devoted squire of the Don.

Sancho Panza likes Don Quixote—but they are not at all alike. Indeed, one might say they are a picture of unlikeness.

“Unlikeness is us,” says the speaker, in one of the oldest love poems in the English language, an enigmatic lyric called Wulf and Eadwacer. Here it is in Christopher Patton’s new translation:

As if one had made the people an offering.
They will receive him if he comes in violence.
Unlikeness is us.
The wolf is on an island. I am on another.
Mine is secured and surrounded by marsh.
The men on that island are glad at war—
they’ll receive him if he comes in violence.
Unlikeness is us.
I have borne a wolf on thought’s pathways.
Then it was rainy weather and I sat crying.
When the war-swift one took me in arms,
The joy he gave me, it was that much pain.
Wolf—my Wolf—thoughts of you
sicken me. How seldom you come
makes me anxious, not my hunger.
Listen, onlooker, to our miserable whelp
a wolf bears to woods.
Easy to part what was never joined;
our song together.

In the commonplace book he kept between April of 1783 and October of 1785, Robbie Burns wrote:

I have often thought that no man can be a proper critic of Love composition, except he himself, in one, or more instances, have been a warm votary of this passion. As I have been all along, a miserable dupe to Love, and have been led into a thousand weaknesses and follies by it, for that reason I put the more confidence in my critical skill in distinguishing foppery and conceit, from real passion and nature.

To hear Burns speak, you would think him a hoary Bard of seventy; in fact, at the time he wrote these lines, he was twenty-four. Perhaps this should not surprise us. One knows everything about love when one is young. It is only as one ages that one acquires the rudiments of an ignorance in the discipline.

At twenty-four, Burns had had “major associations,” as his editor delicately calls them, with seven women: Nelly Kilpatrick, Peggy Thomson, Tibbie Steen, Ellison Begbie, Mary Morison, Agnes Fleming, Anne Rankine, and several “Tarbolton Lasses” whom the editor does not deign to count.

Nelly, Peggy, Tibbie, Ellison, Mary, Agnes, Anne: forgotten bards. I wonder if any of them is the anonymous author of “My Luve’s like a red red rose.” We know, for instance, that Agnes liked to sing, and that Burns listened to her singing with “religious devotion.”

Till a’ the seas gang dry, my dear,
And the rocks melt wi’ the sun:
I will love thee still, my Dear,
While the sands o’ life shall run.—

To anyone who has been in love, who has been, as Burns says, a warm devotee of the passion, the next line will come as no surprise:

And fare thee well, my only Luve!

We protest the eternal nature of our affections only to turn around and say farewell. That is humanity for you. That is love. Thus Burns moves on from Nelly, to Peggy, to Tibbie, to Ellison, to Mary, to Agnes, to Anne. Wolf leaves for his Island. Unlikeness is us.

And yet. And yet, says the Lover, I will come again.

I will come again.

“He will come again,” says the prayer book, “to judge both the quick and the dead.”

“It was but a little,” says the speaker in the Song of Songs, “till I found him whom my soul loveth.” I will come again, my Luve, / Tho’ it were ten thousand mile.

No sooner does the speaker come up with one comparison, they discard it in favour of another. And another. For my Luve is like … everything. It is (or he is or she is or they are) like the keys that are sitting on my desk as I type these words; it is like a man’s scarf, like a woman’s hairdo; it is like the wind; it is like the sky. My Luve is that which beggars comparison. It is … unlikeness.

And yet, we are told, it creates us in its likeness. My Luve is like … us.

My Luve is like us—and then, with one great sweep of its hand, the way a professor might erase the word “like” from the bard’s comparison, trading simile for metaphor, it is us. It becomes us. The Word becomes flesh and dwells among us, full of grace and truth.

(It is perhaps for this reason that Burns, educated as he was by those great forgotten Christian bards, Nelly, and Peggy, and Tibbie, and Ellison, and Mary, and Agnes, and Anne, “never considered his sexual expertise to be at loggerheads with personal religious morality.” As the editor reminds us, in the text of his commonplace book, Burns commends to his reader the practice of “keeping up a regular, warm intercourse with the Deity.”)

I like to imagine Agnes Fleming singing this song to Robbie Burns: a lass, stepping into the role of a lass’s lover, to sing to a lass’s lover this song of his love—which is also her love for the duration of the song. I am like you, her singing seems to say. I am you.

As fair art thou, my bonie lass,
So deep in luve am I;
And I will love thee still, my Dear,
Till a’ the seas gang dry.—

Till a’ the seas gang dry, my Dear,
And the rocks melt wi’ the sun:
I will love thee still, my Dear,
While the sands o’ life shall run.—

Luke Hathaway has been before now at some time boy and girl, bush, bird, and a mute fish in the sea.