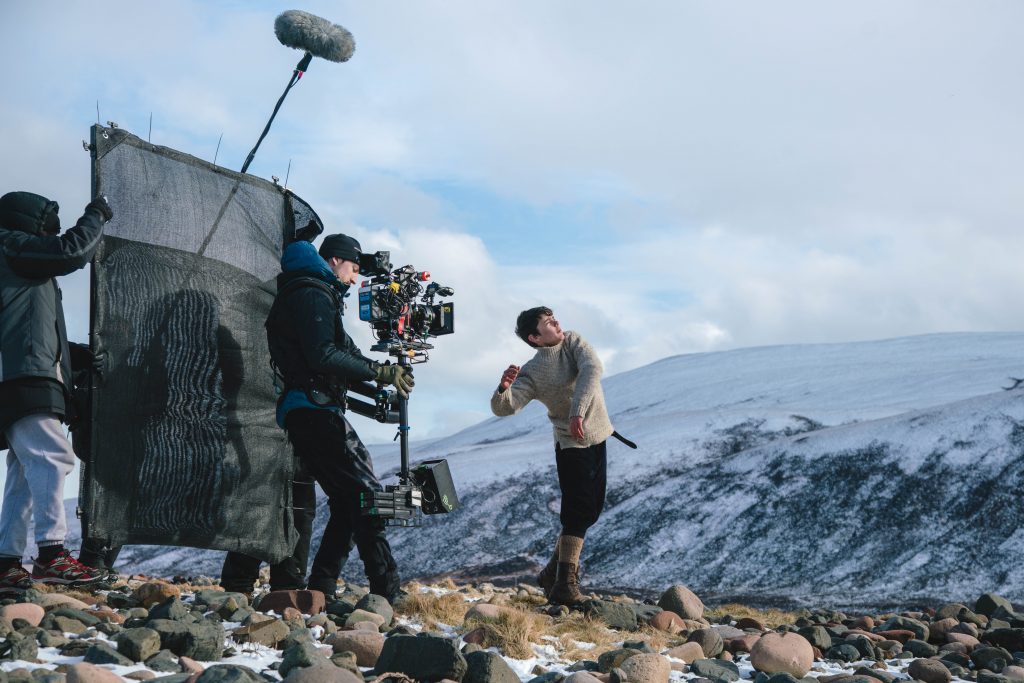 Tom Gentle is on an island in Northern Scotland.

He’s looking out the window of an old stone house as smells of fusty, woody mud and ancient smoke fill his nose. Through waxy glass, he observes a horse perform grazing in the middle of a snowy field. Inside, there’s the heat of too many bodies for a small building. The actors are rehearsing a scene for Gentle’s short film. Once they’re ready, a film crew waiting by will capture the performance.

Gentle is directing an adaptation of “In the Fall” from Alistair MacLeod’s critically acclaimed collection of short stories Island. MacLeod, who passed away in April of 2014, is probably the writer who best captured Cape Breton’s twentieth-century shift from a society based on mining, fishing, and farming.

It’s only by chance that Gentle read MacLeod’s work. He was on a film shoot in Orkney when he saw the cover of Island. He picked up the book assuming that the stories were set in Scotland.

When he read “In the Fall” he was sunk into a dusty chair. The words disappeared, and he was transported into the domestic life of a family struggling to make ends meet.

Travelling up from Glasgow to Orkney with his crew, Gentle obsessed over how he could avoid creating a film that looked self-consciously artistic. He didn’t want to open with a wide shot, then move to a mid-range shot, then a close up of the horse. He wanted to recreate his own sense, when he read the story, of being immersed in an imaginary world. So he and his crew developed a plan in which the cameras would follow the scenes almost if they were characters in the story, giving viewers the chance to live briefly in this abandoned, wind-battered landscape.

Growing up in rural 1990s Scotland, Gentle knew what it meant to work a farm, and he understood the precarity of living off the land. He was one of those kids we all knew growing up: the TV-deprived who wasn’t aware of any of the shows or films the rest of us revered or mocked in between classes.

When Gentle got older, friends introduced him to movies like Jurassic Park and Die Hard. Imagine having never seen a film in your life, and then there you are at your buddy’s apartment with a pint of beer in your hand and that classic scene comes on where the T-Rex hurls the severed goat leg on top of the glass jeep roof; the weaselly lawyer runs off to hide in the toilet only to get eaten alive. You’d be hooked. And he was. From that point on, Gentle dreamed of becoming a filmmaker.

There are no bloodthirsty dinosaurs in the rural Scotland of Gentle’s adaptation of “In the Fall.” Instead, seeing his own childhood in MacLeod’s work, Gentle focused on the quotidian and the universal. The tough and pragmatic mother, Mairi, played by Susan Coyle, believes the family needs to sell their steadfast but ageing horse, Scott. Though his measured, quiet father, Archibald, played by Stuart Bowman, initially disagrees, he eventually consents, while their son (reduced from two boys in MacLeod’s story), played by Lewis McGowan, is far more explosive and lashes out at his parents’ lack of loyalty.

As a young man, Gentle moved away from home, first to university and then to Glasgow to work in the film industry. He got used to the luxuries of city life, but maintained a nostalgia for his childhood, and MacLeod’s depiction of a family hard done by social and economic changes entranced Gentle. But there was something more. Cape Breton, a place he’d never been, read as Scotland’s doppelgänger. He was absorbed into a familiar but strange world, a repetition of one familial story of hardship that has happened and continues to happen in many places in the world. “In the Fall” vividly captures a harsher way of life, and MacLeod magically imbues this world with a grand, mythic quality, transforming toil and hard work into an epic vision of the past. In the hands of a great artist like MacLeod, a grunt can be transfigured into song.

The dark period of the Highland Clearances in the eighteenth and nineteenth centuries saw large numbers of emigrants move from Scotland to Cape Breton. These forced migrations inevitably created a sense of loss and nostalgia that connects the two places to this day. As someone who grew up in Atlantic Canada, I can’t help but wonder how New Scotland must look to the Scottish. Does it have the allure of a buried time capsule of identity? What was thought to be lost in the present has only been hidden away. And yet, living here one knows that even though Nova Scotia celebrates its Scottish identity, Canada’s Ocean Playground is also much more complicated. You’ll see gift shops decked out in tartans, Gaelic road signs in Cape Breton, but before the Scottish, there were the Acadians, and before them the Mi’kmaq. Which is to say nothing of the Africadians. What of these all too often ignored identities, their loss, their language, their nostalgia?

On the day of the shoot, Gentle is blessed with a deep, moody backdrop. A skin of snow is draped over the dull, green grass. Under the dark sky, there are steep, grey cliffs; barren, crumbling mountains; a black, rolling ocean. Even if it isn’t the actual setting of MacLeod’s story, this snowy island in northern Scotland perfectly evokes “In the Fall”’s end-of-the-world tone.

Gentle knows that fans of MacLeod’s work might find it jarring that his adaptation is set in Scotland. For him, however, culture is more important than location. He plans to have the boy, Callum, speak a few lines in Gaelic, the original language of Scotland’s highlands and islands, and the chosen tongue of many who left for Canada during the clearances.

Gaelic is much more than a language, particularly for an author like MacLeod. As a contrast, he once said of English that it was “the language of work, and they would learn the nouns for the tools—like pick, and shovel, and rock, and so on. But for them, English was never the language of ‘sensitivity,’ and they would never for example, be comfortable saying, ‘I love you’ in English. And over time, as the younger generations learned English in the schools and took it for their language, there was a real sense of loss felt by the older generations.”

To cut against this sentimentality, some of Gentle’s stylistic choices were more influenced by practicality than passion. He and his producer, Rupert Clague, ran a successful crowdfunding campaign for production costs on various social media sites such as Twitter and Reddit. That’s how I came into contact with Gentle. The pair managed to raise £15,000 altogether. Even Margaret Atwood tweeted her support.

Fifteen thousand pounds isn’t a lot of money in filmmaking terms. This lack of funding, however, might have contributed to Gentle’s aesthetic vision as he planned out his adaptation of “In the Fall.” In the original piece, one of MacLeod’s most vivid scenes involves a flashback of the family horse patiently waiting for the father outside of a tavern on a frigid night.

Gentle loved this scene for the beautiful way it demonstrates the father’s loyalty to Scott. But to film that flashback, he would have to pay for a second location and extras to fill the space. How many more pounds would that be? How much more crowdfunding? How many more Margaret Atwood tweets?

It’s not simply that a scene set at a tavern would mean extra expenses; it’s that a flashback risks pulling the viewer away from the immersive experience that Gentle and his crew want to create. He listens to the voices of the actors as they rehearse. He’s told them of the complex memories in their characters’ heads, and he hopes that their faces will communicate these flashbacks trough timing and expression.

In MacLeod’s story, Scott is kept in a barn. Gentle’s location doesn’t have one, and he has no plans to build one or to create one through CGI. Instead, he’ll have Archibald looking out the window just as he’s doing now. Scott will stand alone in the snow-dusted field: a far more powerful image than having the father stare at the side of a barn.

To create the appearance of one continuous shot, he and the camera crew will implement a strategy called the banking system. The film moves between the interior of the home and the exterior of the field. In between each scene, there’s a chance to “wipe,” meaning that one of the actors will walk past the frame quickly so Gentle can cut while maintaining the illusion of continuity.

He wants his actors and his audience to forget about the camera. He hopes his viewers will feel as he did reading MacLeod’s story, as though they’re watching real life unfold.

They’ve rehearsed enough. They’ve even practiced with the cameras off, the film crew bustling around the actors, letting them move as freely as possible.

He’s planned this out a hundred times, but he’s also open to creative spontaneity. He turns from the window. He’s ready to start.