By Emily Donaldson on April 13, 2022 Interviews

Dimitri Nasrallah began writing and teaching in the early 2000s, following years doing PR work in the music industry. In 2004, he published Blackbodying, a novel contrasting the exilian realities of Lebanese men from opposite stations of life. The Hugh MacLennan Prize-winning Niko (2011) and The Bleeds (2018) followed shortly afterwards. For the past decade, Nasrallah has also been the fiction editor of the Esplanade Books imprint Véhicule Press. He has also worked as a translator, notably of Quebec writer Eric Plamondon’s 1984 trilogy.

Nasrallah’s latest novel, Hotline, is a paean to motherhood and an honest portrayal of how nationalism is used to justify cultural stagnation. It follows a single mother, an immigrant to Montreal from Lebanon, who must abandon her teaching career to work as a phone operator at a weight-loss centre.

Dimitri talked to Jean Marc Ah-Sen about the shifting arena of Canadian publishing and why he considers writing to be a politicized activity. 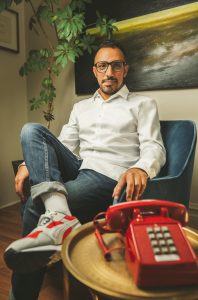 Jean Marc Ah-Sen: Muna Heddad is partially a tribute to your mother, so why did you frame Hotline as a novel and not a memoir?

Dimitri Nasrallah: When the pandemic hit, I no longer knew what to do with myself. Every day I wrote whatever came to my mind. What emerged was that I had unresolved issues with my mother, and that they related to that first year we moved to Canada. At the end of the day, I’m not a memoirist. I’ve always been drawn to magnifying conclusions from my life and transforming them into characters and fiction. Committing myself to a memoir would involve creating a lot of havoc with people around me and committing myself to a narrative that I have to live with. I prefer to just take little bits and reconstruct the rest.

JMA: One of the ways Muna deals with her husband’s disappearance is by imagining him stepping into the shower with her each night. There’s an otherworldly quality to these imaginary assignations. How did you hit upon this idea to connect grief with the mystical?

DN: It doesn’t come from an academic place. Muna gets to do a lot of talking at work, but none of it is actually meaningful. It’s a lot of giving and no receiving. In the absence of people being there to offer a shoulder, we tend to invent them for ourselves, especially if we’re in a new country. She doesn’t want Halim to be dead, and if she can visualize him, it’s not post-trauma yet—you don’t have to deal with the finality of it.

People didn’t have the language in the 80s to think about PTSD. I definitely notice it with relatives in Lebanon who went through the war. From the outside, it looks horrific, but you talk with them and it’s like the frog-in-water situation—“What do you mean the water’s boiling? Everything’s okay! We have some electricity, we still have our coffees daily!”

JMA: You’ve said that one of the paradoxes of publishing in Quebec is that the primacy of the Francophone/Anglophone cultural divide—the “two solitudes”—means that other social issues are ignored. What can you say about your portrayal of Montreal in Hotline, which is a place of hopelessness, but also of yearning and triumph for immigrants?

DN: That was an era [the 1980s]of great polarization in Quebec, which can end up vacuuming out every other narrative that can be there—it’s either the pro- or anti-sovereignty side. My family was inconvenient to this narrative; we were supposed to be assimilated into the pro-sovereignty side because we spoke French. Immigrants were moved directly into the French system and you could not go into the English system at all. My education was politicized whether I liked it or not. That’s when I had notions about how life is stacked against you. Whenever you have these systemic blockages, the only way around them is situational alternatives—you have to rely on the kindness of individuals to create opportunities. That’s where the resilience comes from in immigration stories. People succeed despite the system. That’s the part about the human spirit I find most noble.

JMA: As a fiction editor and creative writing instructor, you’re upholding a certain literary standard while shaping the future of Canadian writing. Are the impulses guiding you editorially the same ones at work when writing your books?

DN: There is a baseline approach I apply to every manuscript I edit—every piece of student writing and my own work. A big part is understanding why you’ve decided to tackle a story. Another part is the fundamental accuracy of description, the concreteness of “seeing” a story. You can’t access that language or imagery until you know what it is you’re trying to communicate.

I listen to where the material wants to go, which can differ from what an author wants from it. It helps if the writer can listen to what the work is saying. Like putting a manuscript in the drawer for a year and looking at it again, it’s not really the eyes that change, but the ego’s investment in the material. I advise writers to operate with humility; be a custodian of your work, and allow it to live and breathe without you.

JMA: You’re known for writing wartime political fiction. Who are some of the writers who helped you realize the viability of this form?

DN: Because my life was politicized along the way—I spent my first five years indoors playing with a vacuum cleaner and a flyswatter during the Lebanese Civil War—years later it siphoned into a perspective. If I’m a political writer, it’s because I see life as inherently social, and feel weird operating from that position of privilege where “it’s all just fun.”

With The Bleeds, I went too political maybe, getting into the pricing of uranium. With Hotline, I began to see it as not being just about me at the centre of this childhood neglect; I began seeing it as this tenuous situation that my parents walked into. Seeing that connection between the individual, the situation, and the political structure… it’s really where my interests go at the end of the day. 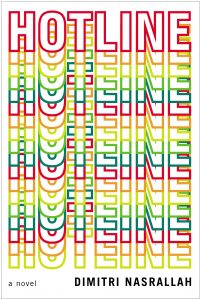 JMA: Bolaño said that translation was a “voyage to the edge” that rescued a text from the “final lonely fate” of a singular readership. What was it about Eric Plamondon’s 1984 trilogy that compelled you to translate it for a broader audience?

DN: The Plamondon spoke to me when I had an eye for experimental artifice. Plamondon has these fragmented sections that add up in this pointillist manner. They’re akin to poetry and mathematics. I would never go there with my own writing, which had a “lane” already that it was going in. It’s about creating room for different identities and moving toward identity politics. I think it’s really important to do.

JMA: There’s this idea that it isn’t enough to publish writers of colour; that only when there’s diversity at the senior levels of publishing can better cultural politics be created. Were these considerations you had when you became Esplanade’s fiction editor?

DN: Different backgrounds are going to make different choices. The centralizing force’s view of diversity is not enough—you have to let diversity speak for itself. My goal originally was to do the job as best as it could be done in the “normal way.” Two years into it, I felt there was a disconnect between me and the writers I was working with—books I thought would “land” in CanLit.

The first book going in the other direction, where I approached the writer from a political point of view—we share the same politics, and we can do a good book together—was Kaie Kellough’s Dominoes at the Crossroads. The whole project fell together more rewardingly than anything that had come before. [Véhicule co-publisher] Simon Dardick, who is an old, wise soul, said “If this is what you feel you should be doing, just do it.”

JMA: What are you most optimistic about regarding Canadian literature? What is the largest issue it’s facing today?

DN: I’m most optimistic about the sales numbers on diversity. It’s outselling everything else from our end. It’s not ideology that someone’s trying to force down people’s throats. It’s a real audience. It’s not a matter of tokenistically putting these faces out there to score points from the Canada Council.

The largest issue would be the difficulty of getting a “good idea” to a reader. The model that’s there for critical reception is almost absent. Distribution—how to sell books and create attention for books—is getting harder at the same time that you are seeing newer voices. Those two things are cancelling each other out.

This system of diminishing returns—it’s a larger structural problem distorted by the fact that there’s a small marketplace, and a large share of it is taken up by multinationals who suck out the energy out of the room, which distorts the agenting process, the subsidiary rights process, what happens in marketing. It’s not a fair ecosystem at all!