I’m Thinking of Ending Things (Simon and Schuster), Iain Reid’s debut novel, is a psychological suspense thriller set over the course of a single day. Reid, who’s from Kingston, Ontario, has previously written two memoirs, One Bird’s Choice and The Truth About Luck (both published by Anansi). 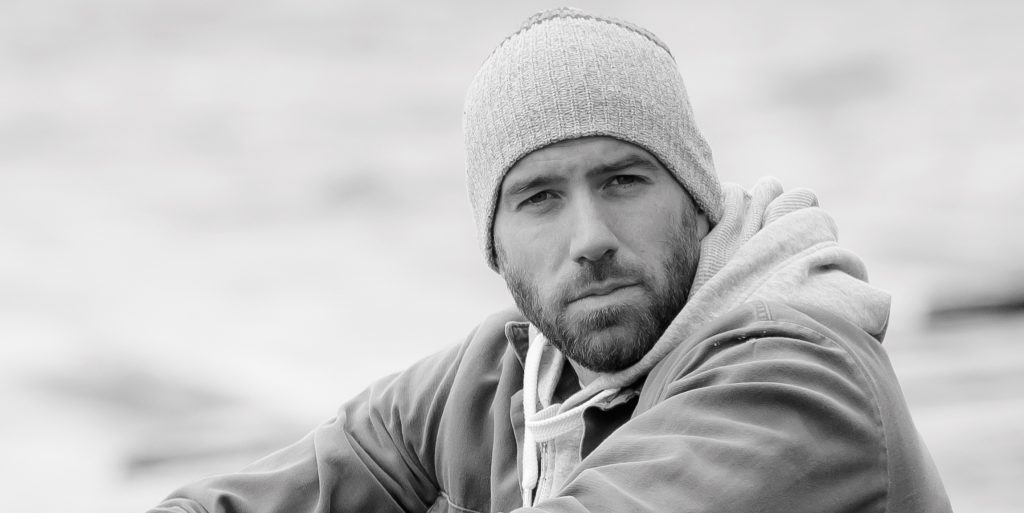 Brad de Roo: This is a hard book to talk about without going into spoiler territory. How would you briefly describe it doing so?

Iain Reid: I would say it’s a story about a young woman setting out on a first road trip with her boyfriend amidst a growing sense of dread and guilt about agreeing to go at all because she’s been feeling some doubts and uncertainty. The book is about what happens on this trip.

BdR: On page one of I’m Thinking of Ending Things your (unnamed) narrator states: “Maybe the end was written from the beginning.” Does this speak to you as a writer? Does a good beginning propose an inherent end?

I was trying to avoid laziness, which is, for me, often harder than it sounds. I wanted to avoid any kind of predictability, and I also tried to avoid writing a novel that fit neatly into any single category or genre. To me it’s just a novel, a story.

IR: I think it does speak to me as a writer. But a good beginning can be just that — a beginning, a start. Beginnings are often much more explicit and pronounced than endings. With this book and its ending I was interested in offering a chance for interpretation. As a reader, I’ve always enjoyed books that, by the end, have put some of the onus onto me to decipher and complete the story.

BdR: Your first two books are memoirs. What does a novel offer that a memoir doesn’t?

IR: A novel offers space — a new reality, instead of reliance on a previously accepted one. It’s a larger scope when the author doesn’t have to stay on a predetermined path. Of course this is obvious, but the possibilities with fiction are essentially limitless. I find this exciting.

BdR: Did anything surprising carry between the two forms?

IR: In my experience, once the writing starts, the process of working on a memoir or a novel becomes quite similar. The biggest difference is earlier on, in the architecture, the design. But once you start building, as you put the sentences together, both are just stories, and the author’s loyalty should be to the story.

BdR: Was there anything you were trying to avoid in this shift?

IR: I was trying to avoid laziness, which is, for me, often harder than it sounds. I wanted to avoid any kind of predictability, and I also tried to avoid writing a novel that fit neatly into any single category or genre. To me it’s just a novel, a story.

BdR: What do you find most predictable or lazy about novels?

IR: Fiction is tricky for me, and I had to try hard not to be lazy. When working on a long project, something that will take a few years, there are times when I have to remind myself not to revert to what’s most comfortable, to keep working, to keep asking questions.

BdR: A recent article in the Walrus by Naben Ruthnum, “Narrative Devices: Rewiring the Mystery Novel for the Digital Age,” discusses how you used communication technology in I’m Thinking of Ending Things. Ruthnum notes that many thrillers or mysteries (genres your book touches upon) ignore “the contemporary reality of instant communication.” Was breaking genre conventions or retooling narrative devices on your mind when you decided to make a cell phone central to your story?

IR: I really enjoyed Naben’s smart article. I definitely thought a lot about how technology has changed in recent years, and how attached people can become to their phones. I was visiting Chicago recently and it’s really noticeable in an airport how few people are ever just sitting and not looking at their phone. Even people who are sitting together having a meal! You can debate whether you think it’s good or bad, but either way, it’s certainly a meaningful and drastic transformation of the culture, the way we think, and how we pass the time, even when we’re alone.

BdR: Do you read many mysteries or thrillers?

IR: I do. I wouldn’t say either is one of the genres I read most, but I do go in and out of phases where I read a certain kind of book obsessively, mysteries and thrillers included, for a couple weeks or so, like getting into a certain kind of music and seeking out all the great records of the genre.

BdR: You make great use of misdirection in I’m Thinking of Ending Things. Is this something you took from your obsessive reading?

IR: Possibly, but it’s tricky for me to know precisely how my way of reading, and what I’ve read, influenced the story. I’m sure it did, but it was never clear or deliberate. I think there are probably certain movies, and some music, too, that have left a similar imprint on this book.

BdR: Do any particular books from this reading period stand out for you?

IR: There are many that stand out, many that were memorable reads, books that I would immediately want to reread when finishing. Just off the top of my head I can remember really enjoying [Lionel] Shriver’s We Need To Talk About Kevin and [Michel] Faber’s Under The Skin. I’ll put [Knut] Hamsun’s Hunger in there, too. And many, many more.

BdR: In his essay Ruthnum writes:

Technology invades [Reid’s] narrator’s life in a manner that makes the real-world danger clear: once our thoughts and conversations become public commodities, we may have little left with which to define ourselves as individuals.

Does this ring true? How does being a writer work into this mix?

IR: Yeah, it does ring true. Commodifying our thoughts, our conversations, making them public, it’s a frightening proposition. But this can make for interesting and challenging material for a writer. There’s plenty that’s changing, and we don’t really know or understand what impact these changes will bring, or how our relationship with technology will continue to evolve. These are the kinds of topics that can be fun and maddening to think and write about for a few years. There’s no satisfying conclusion.

BdR: Your narrator is constantly contacted on her cell phone by an unidentified character named The Caller. Have there been any unidentified callers in your life?

Sometimes the most meaningful and difficult mysteries, the ones that make us most uncomfortable, are the ones we tend to actively avoid.

IR: I was just reminiscing with a friend recently about answering the family phone when I was growing up. There was always an inherent sense of uncertainty. That was the nature of answering the phone. We didn’t have call display. We didn’t have an answering machine. In fact, I grew up on a farm and for the first few years we had a party line with some of our neighbors. Now I rarely answer my phone as is, and would never answer it without knowing who was calling.

BdR: How would you personally deal with the kind of situation your narrator is faced with? Would you be intrigued? Would you want to solve the mystery?

IR: I might try and avoid solving the mystery, which is what I think this book is partially about, too. Sometimes the most meaningful and difficult mysteries, the ones that make us most uncomfortable, are the ones we tend to actively avoid.

BdR: Ambivalence and ambiguity are major philosophical concerns in your book. Characters are unsettled in their relationships to others and unsure of their places in the world. They speak a lot about the difficulty of knowing each other and the Other as a whole. They struggle to find meaningful, coherent identities. What about these concerns interests you?

IR: Oh, boy, well, I think all of this stuff interests and concerns me on some level, and at times, can disturb me. I don’t how anyone can not care at all, or not think at all, about this kind of stuff.

BdR: Do you think ambivalence and ambiguity are becoming more prevalent features of our lives?

IR: I do, yeah, definitely. And it’s not always a bad thing, right? But both can become quite scary in certain contexts.

BdR: One scary side seems to be the potential for an almost pathological loneliness… Many of your novel’s characters are certainly very lonely. Are there certain modern contexts that are essentially lonely?

IR: Despite all the people and activity, I find large cities can often be lonely. Sometimes it’s the places with the most people that are the loneliest.

BdR: Do you ever question why you began writing?

IR: No, I don’t question why I started. I do question, though, if I’ll be able to continue doing it.

BdR: What questions should we end with?

IR: I just like this idea, of ending with more questions, regardless.