Do Not Say We Have Nothing (Knopf), Vancouver-born, Montreal-based Madeleine Thien‘s latest novel, explores the Cultural Revolution and 1989 Tiananmen demonstrations through the eyes of two successive generations in a Chinese family. Thien is one of two Canadians longlisted for the 2016 Man Booker Prize (the other is David Szalay). CNQ’s Brad de Roo interviewed her on the eve of her nomination. 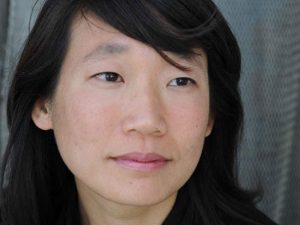 Brad de Roo: : If you were casually asked on public transit what your book was about by a soon-to depart stranger, how would you describe it?

Madeleine Thien: That is a beautiful question. I would say, music, art, and revolution in China, and what might happen if we erase our private selves with our own hands.

BdR: Your novel contrasts Canada (BC of the 90s) with China (from the Cultural Revolution onward). What are the biggest misconceptions Canadians have about China and Chinese history?

MT: This is a complex question and maybe the easiest starting point for me is to actually reframe the question a little, to say that I’m not sure that the novel contrasts as much as it works with dissonance and movement. For the characters in the book, the two countries alter the course of their lives, but both places, from their politics to their physical worlds, are part of a continuous fabric. For me, the novel is driven by people, the experiences they live, how they’re prevented from living, the ideas that germinate in them, and the book of records (ideas, art, love) that is each individual life.

BdR: Have Canadian literary accounts of China questioned or propped up misconceptions or biases? Is there at all a tendency towards Orientalism, in Edward Said‘s sense of the term?

MT: I think every book about China (or any place, really) reveals both China and the writer. So much of narrative is about distance, intimacy, who we think we’re speaking to (or not speaking to), how we imagine ourselves in relation to another. In the Western imagination, the word China itself has been, for better or for worse, emblematic of cultural distance. I think the work that has excited me most has been by writers who understand not only the complexity of Chinese culture and history, but the complexity of meaning itself. I love recent work by Evan Osnos (The Age of Ambition), Louisa Lim (The People’s Republic of Amnesia), and Leslie Chang (Factory Girls), and Denise Chong’s Egg on Mao, among other books. One of the great books is Colin Thubron’s Shadow of the Silk Road. I sort of sidestepped your question, and looked at the Anglo-American sphere, rather than the Canadian one.

I want to know how much of the world, this very dissonant and complex world, can be heard inside a novel. It’s true that my work has a great deal of intertextuality, but I think of the novel as an open space, and literature as a place to think in multi-dimensional ways.

BdR: Your novel makes complex use of intertextuality and peels stories within stories in an onion-like way. What about these conceits fascinates you?

MT: I’m not sure I think of it as a conceit or a device, necessarily. Lives cross and re-cross and echo in this symphonic way; and further, every individual also holds many lives (former selves, potential selves) within themselves. I love the novel form because it’s a young form. There’s room to play and to push at limits. I want to know how much of the world, this very dissonant and complex world, can be heard inside a novel. It’s true that my work has a great deal of intertextuality, but I think of the novel as an open space, and literature as a place to think in multi-dimensional ways.

BdR: Stories are (literally) buried within stories. Words must often be concealed or hidden from actively reforming political powers. Is being an archaeologist of hidden stories an essential part of being a writer?

MT: The act of listening is essential, I think. Archaeologist, historian, detective, musicologist, novelist, scholar, carpenter, scientist – in the end, the essence is attentiveness, concentration, listening.

BdR: Is this listening related to the state of quiet, or qu, that appears throughout the novel?

MT: That’s interesting. The qu is sometimes not having the words, or having the words taken from you, for instance in a political climate when words begin to mean their opposite. I think listening is a state of being. You have to listen to know when you can add your voice to the fabric of sound and be heard. If you speak in the noise, you may inadvertently just add to the crescendo of noise.

BdR: Do your many characters’ many voices come to you via a sort of deep listening?

MT: These interruptions in time seem natural to me. Friends, lovers, strangers – they all arrive, disappear, return, etc., but we instinctively make their arrivals and departures into a kind of continuity. There’s a rhythm to life that a bigger novel – this one is 450 pages or so, which is gigantic in my body of work – makes space for. It’s a challenging and even ethical question for an artist: if you’re going to take up 20 hours of someone’s real time, what range of experience, of feeling, of insight can be made possible?

BdR: The novel spans a considerable amount of time. What sort of research did you do to get the details right?

MT: I spent a great deal of time in China, from the cities of Shanghai to Dunhuang, and Guangdong and Guangxi provinces. I talked to people, but I always talk to people. For some reason, whether it’s China or Cambodia or Canada, strangers approach me all the time, and so I’ve been gifted with countless unexpected and expansive conversations. I read about history and politics, but I also read a great deal about music, and I listened to music, a broad range, but also to certain pieces over and over again. I wanted the music to be instilled in me. On the one hand, it was research, but on the other, it was living my life, being part of the world.

MT: I think so. But there needs to be space for the reader to live and think and imagine. Not every novel will work for every person, of course, but sometimes there’s a real chemistry. As a reader, I often feel I’m meeting another mind, and it’s exciting. There’s a quality of dance. The book knows when your mind might ask another question, and it might sidestep that or pose a different question.

BdR: Music is both a force of aesthetic resistance and public capitulation in your book. Is there something about the novel’s historical period that particularly lends itself to music? Is this power dynamic applicable to art in general?

MT: That’s a difficult question. I don’t think it’s particular to the novel’s historical period. Music is probably older than language. Revolutionaries, politicians, advertisers, artists have all recognized that music affects us in profound ways. It’s a language like any other and can be used to evoke and provoke, to create solidarity as well as feelings of immense solitude. In the novel, I think of it as a language, one that the musicians have to choose how to use: whose music, whose words, on whose behalf, and to what ends. But in the Cultural Revolution, everyone had to choose whether to adopt the Communist Party’s revolutionary language and philosophy – and its attendant actions – regardless of whether they were writers, scientists, scholars, factory workers, or schoolchildren.

I would say that both of these art forms, and their distance from language, have always informed my writing. I suspect there’s a great deal of gestural and tonal nuance in the work. I like to think of it as another way of seeing.

BdR: How does music inform your writing? Is it a parallel form? Do you notice much overlap between musical and literary notations of emotion? Is there an underlying aesthetic logic?

MT: I trained for many years as a dancer (ballet and contemporary dance) so, for me, music was inextricable from this expressive art form. The dancers and the classical musicians are not necessarily the creators of the work of art, but they (their bodies, emotions, and intellect) are the vehicle for it. And I would say that both of these art forms, and their distance from language, have always informed my writing. I suspect there’s a great deal of gestural and tonal nuance in the work. I like to think of it as another way of seeing.

BdR: Music by Bach, Tchaikovsky, etc is persistently referenced throughout your book. Do particular pieces or composers play in this distance as you write?

MT: Bach’s Goldberg Variations was key. It taught me a great deal about counterpoint and structure and ambiguity and range. And Glenn Gould’s recordings of this music taught me about expression, time, desire.

BdR: If this interview were a little piece of music, on what note would you end?

MT: It would end just like this, to the sound of the reader’s world, wherever they may be. Traffic, children, radio, the continuation of the fabric of the world.