By Emily Donaldson on November 2, 2016 Interviews

London-Ontario-born artist and cartoonist Marc Bell is the author of Shrimpy and Paul and Friends, Hot Potatoe, Pure Pajamas, and Stroppy (all Drawn & Quarterly). This year, Bell was asked to design the cover for the Best American Comics 2016 anthology, guest edited by Roz Chast.  Brad de Roo spoke to him about the process. 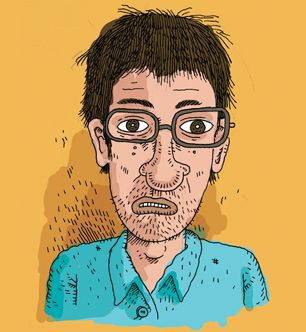 Brad de Roo: How’s it going, Marc? What have you been up to?

BdR: Does having something else to focus on help you work?

MB: Yeah, kind of. If I’m not doing anything too complicated it helps a lot. It’s more fun to work with something else going on.

BdR: Did such spectatorship play much of a part in your work on The Best American Comics 2016?

MB: I drew the front cover earlier this year, I think it was winter and there wasn’t much going on in baseball or futbol. I worked on the spine and back cover this summer and so, yeah, I was watching the EuroCup.      After the EuroCup ended I switched back to baseball and it seemed so abject in comparison.

BdR: Abject, how so? More drawn out? Fewer cool uniforms and shapes of play?

MB:  Soccer seems more appealing or universal to me, more social perhaps? Whereas baseball is slow-moving. A boring non-spectacle. Lots of fussy stats being doled out to the viewer. Baseball players can be pretty out of whack and still function. Cartoonists can also be out of whack. I remember that moment when I was bending over to pick up a fallen eraser and thinking “I am not an ectomorph anymore.”

Biagini, this pitcher for the Jays, I think he is a 7th- or 8th-inning pitcher usually, a relief one, he’s like a living Mad or Cracked magazine character, like a Jack Davis drawing. He sort of struck me when I first saw him and, as it turns out, he is a total goofball and he messes with the minds of reporters, lying and stuff. A funny guy.

BdR: “Lots of fussy stats being doled out to the viewer.” To a shoddy sketcher like myself, that sounds like part of the process of drawing well? 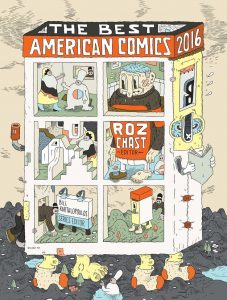 MB:  Ha ha, well, this Best American Comics cover worked out really well. They don’t always go like this: smoothly. I came up with an idea, kind of really loosely sketched it out and sent it to the publisher and they liked it.

BdR: Aside from increased rotundity, fussy statistics, spectator sports, and messing with the minds of reporters, what are the main considerations in a project like the Best American Comics cover?

MB: I think I remember a film director, I forget which one, saying that some projects just line up and you knock them down whereas others can be like pulling teeth.  Maybe that doesn’t really answer your question?

BdR: Ha. Well maybe there weren’t as many main considerations as I, a shabby sketcher, would think?

MB: Ha ha, maybe not! I guess the idea I came up with is sort of obvious, really: a 50,000-ply piece of paper that has “panels” cut right into it. So it is sort of a 3-D comics page, only this comics page has four legs and they are yellow and it is also has a one-eyed face on the side of it, and this character is reading a comic book of its own, an old-fashioned, stapled one. And it’s wearing wool socks on its feet. I forget if it is missing a sock, but a central theme of this cover is the act of pointing at feet. For some reason (not sure why) there’s a lot of foot-pointing going on here. In the “panels” on the cover there are different characters that re-occur inside and outside of them and there’s also a character that takes up two “stories” (if the panels were floors this would be a three story building) and different things are happening in the different spaces.

In retrospect I wished I’d made the spine of the book design into the likeness of the one-eyed 3-D comics page character I mentioned. But these are things one thinks of afterwards.

BdR: What’s different about making a cover for one of your own books versus making one for someone else?

MB: Well, there’s more worry involved in making something like Best American Comics because the cover is representing the year in comics in a way, putting a face on it. So I did want to make something appealing. Trying to make something appealing is a tall order so I guess you just have to go back to the standard and try to make it interesting for yourself and then people might be interested. “Try to exaggerate what people like about you,” said the smart person, giving advice.

And the guest editor, the great Roz Chast, liked the finished cover, so that was good! I was very honoured to be asked to do it.

BdR:  And I guess, with your own book you’re representing yourself or your art and maybe your publisher, but here you’re potentially representing or maybe even introducing a collection of people?

MB: Yeah, this is a group of people. The audience is one thing but the artists might not love your cover. They might tear it off when they get their contributor copies.

BdR: Tear it off and replace it with their own cover?

MB: Yeah, they might draw their own cover! And when you go to their house, since you’re a peer and you end up over there, you see the spine for Best American Comics 2078 and you’re like “Yo, fellow cartoonist, you totally ripped the cover off of your copy and redrew it because you hated mine,” and then you run out of the building crying and the host has too much food now so they eat leftovers the next day.

And before they get to the leftovers on the third day you call them up and say “I’m sorry, I overreacted,” and you go over there for a delightful lunch and talk about, what else, comics. But you avoid the topic of your cover. This is what usually happens, anyway. It’s normal.

MB: I have been asked to draw covers for CDs, which is fun, and vinyl is even more appealing to me, but I don’t draw too many of those. A couple of years ago I designed the cover for Kevin Spensts’ Jabbering With Bing Bong, which was a poetry book, but I can’t think of any other non-comics publication covers I’ve drawn…

BdR:   Were there any challenges specific to those projects? Does each medium present require a vastly different approach?

MB: I guess it depends on the content and the money involved and how much the person hiring me wants to control the situation. A CD design I created last year had restrictions: they didn’t want any characters in the design. So it had to be all inanimate objects. I had to illustrate the four different songs and reference some specific things about each one, how they were made (what instruments were used or what they suggested). This CD won a Norwegian grammy so that was nice to hear. At the same time I was working on an LP cover for a rock-n-roll band and they were kind of open to anything. So it varies.

BdR: In your comics travels have you noticed any big differences between Canadian and American comics anthologizing?

MB: Well, I guess there isn’t a wealth of Canadian anthologies out there that I am aware of. The last one I was in I don’t have a copy of, I wasn’t given one. They gave one away at the launch for the correct answer to a trivia question, I believe Mark Connery won it, so that was funny. There was the Drawn & Quarterly 25th anniversary anthology but that was a little different, there are artists from all over the place in it. Nog A Dod (Conundrum Press) is a great Canadian anthology that comes to mind. It should be considered for any weirdo’s library.

I miss those dime-a-dozen, scrappy American anthologies from the 90s, there were tons of those (eg: Buzz, Buzzard, Hyena, Raw Meat, Twist, Centrifugal Bumble-Puppy, etc) and there was the great Weirdo and Raw from the 80s. There’s still Kramers Ergot and this nouveau thing called Mould Map. Maybe the need for a lot of anthologies disappeared with the internet. Best American Comics is a sampler that makes sense for people who don’t necessarily follow what’s going on that closely.

But I digress, as far as a difference goes, I’m not sure. It could be the difference in population! More people, more anthologies?

MB:  Well, there are a lot of great Canadian comics, obviously. We might have the highest ratio of good cartoonists anywhere, but I suppose this ground is already covered in Best American Comics since it accepts work by Canadians. There’s always stuff left behind, however. Great stuff, and I was thinking the other day: when is someone going to start a “Second-Best” American Comics anthology?

BdR: If you were the editor of a Second-Best anthology, what kind of work would you put in it?

MB: Oh, I would have to think about that. I guess I’d have to look at what didn’t make the cut and try to see what wasn’t considered. This could be a tough job. And a financial disaster. If it were up to me I guess it would start looking like a comics version of Nog A Dod. An “outsider” book. And it wouldn’t be very popular.

I’ve actually been compiling an updated Nog A Dod list for a new project, a “Where are they now?” and trying to think of stuff I missed. I was going to apply for funding to involve audio in it, but I looked at the requirements and my idea won’t fit, money cannot go towards publication costs. So there goes that one.

BdR: Wow. I’d love to see/hear that? What kind of audio?

MB: Well, I have a list of Canadian low-fi I love that I think should be documented. Terry Piercey, Untanned Hide of a Cow, Forty Winks, Translucent Tubes, Bold Sabre/Drue Langlois – all sorts of stuff. And Shayne Ehman and I were talking about trying to find Tumasi Quissa to see if he had any more recordings. Putting together stuff that hasn’t been pressed into wax yet. I didn’t really get to the point of talking to anybody about using their material, so I wasn’t assuming anything. It would just follow the mandate of Nog A Dod: focusing on stuff that hadn’t been officially published that I was worried about falling through the cracks. And stuff I saw a thread running through.

BdR: Would the records pair with certain artists or works? Or would they overlap at the reader/listener’s discretion?

MB: Oh yeah, I suppose there would be a little overlap in that some of the people who made the music also made or make art. So I was thinking a book and some records. A set.

BdR: You’ve kindly provided a GIF to close the discussion. Do you have anything to say about it or does it speak for itself?

MB: I guess it kind of speaks for itself, so we can just let it roll. When I’m colouring I’m saving stages of the process so I don’t lose work if my computer konks out or if I want to go back to a previous state and so I just dumped all that into a GIF file.