By Emily Donaldson on October 3, 2017 Interviews

A finalist for the 2017 Hilary Weston Writers’ Trust Prize for Nonfiction, Tanya Talaga’s Seven Fallen Feathers: Racism, Death, and Hard Truths in a Northern City (House of Anansi) probes the deaths of seven Indigenous high-school students that occurred in the city of Thunder Bay over an eleven-year period starting in 2000 by diving deep into the community’s history and personalities. Talaga, of Polish and Ojibwe descent, has been a journalist with the Toronto Star for over twenty years. She lives in Toronto.

Brad de Roo: You have a very personal connection to the places and stories in your book. Was it difficult not to get overwhelmed by the overlap?

Tanya Talaga: My personal connection to the places in the book is what compelled me to write it in the first place. Having a personal tie to the land and community of Thunder Bay helps me see the events unfolding in a different light than most. Everyone who is from the north is affected by what is happening in Thunder Bay. Everyone is heartsick. The tragic events that don’t seem to stop are overwhelming. Not the overlap. 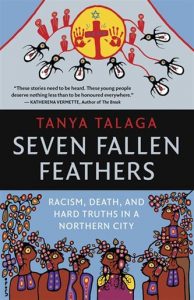 BdR: What’s the place of writing in truth and reconciliation?

TT: Writing reaches people in a more personal way. People connect to the stories, the places, the people affected by the events if you are able to spell everything out—everything that you see—in a larger narrative. This broader context is essential in trying to explain the effects the legacy of residential school has had on generations of Indigenous people. That context can sometimes get lost in TV news clips or newspaper stories. Books can immerse people, make them a captive audience. And if readers are connecting to the story, it is easier to explain to them why they should care. Hence, reconciliation.

BdR: Your one-time colleague at the Toronto Star, Desmond Cole, was heavily criticized for his activism as a journalist. How do you connect activism and journalism? Is it a fraught balance?

TT: Journalists are observers. There are lines we are not supposed to cross. Activism and journalism—where two sides of the story are presented fairly—are two different things. Shining light on stories that are rarely covered, or, giving voice to the voiceless, is good journalism—that doesn’t make you an activist or an organizer for a particular point of view.

BdR: The systematic racism and bureaucratic apathy daily faced by Indigenous families and communities in Seven Fallen Feathers is utterly appalling. Why has it persisted for so long? Have you noticed any positive changes or movements since completing your book?

TT: For a long time, in certain segments of Canadian society, there has been an undercurrent of racism that is entrenched in our structures and our bureaucracies. Everything from the paternalistic Indian Act to leaving Indigenous history off school curriculums to authorities not bothering to call or communicate with First Nations families who have a dead or missing loved one. The Truth and Reconciliation Commission, Idle No More, the rise of social media among Indigenous youth—all help play a role in helping to right previous wrongs by teaching truths. Is it getting better? I have no idea but I hope.

BdR: Thunder Bay comes off particularly badly here. What do you hope the added attention and criticism of the city’s institutional and cultural failings will achieve here?

TT: The history of Thunder Bay is long. It has always been an important meeting place for the Anishinaabe people and, as such, in the historical development of the country of Canada. I think people need to look at the broader picture of the development of Thunder Bay. It’s a special, beautiful, and troubled place. You need to understand its history to understand what is happening in the city now. To a greater extent, Thunder Bay’s story is Canada’s story.

Thunder Bay…  [is]  a special, beautiful, and troubled place. You need to understand its history to understand what is happening in the city now. To a greater extent, Thunder Bay’s story is Canada’s story.

BdR: Education is a major focus of your book. From the culturally genocidal policies of the residential schools of the past to the struggles of today’s underfunded and underrepresented Indigenous-run schools, you note many instances of major failures to secure basic educational opportunities for Indigenous youth. What does a flourishing Indigenous school system look like to you?

TT: That is a big question. One I am probably not best equipped to answer. However, I do know that Indigenous people should be in charge of their own education funding, plans and schools—not INAC. And no child should have to travel five hundred kilometres to go to high school.

TT: The Truth and Reconciliation Commission of Canada came up with 94 recommendations or calls to action at the end of its review. Senator Murray Sinclair, former head of the TRC, has said that if every Canadian were to read the 94 calls to action and if every Canadian took just one call to heart and applied it to their daily lives, we’d all be in a better place. I agree.