By Emily Donaldson on January 15, 2019 Profiles in Bookselling, Uncategorized 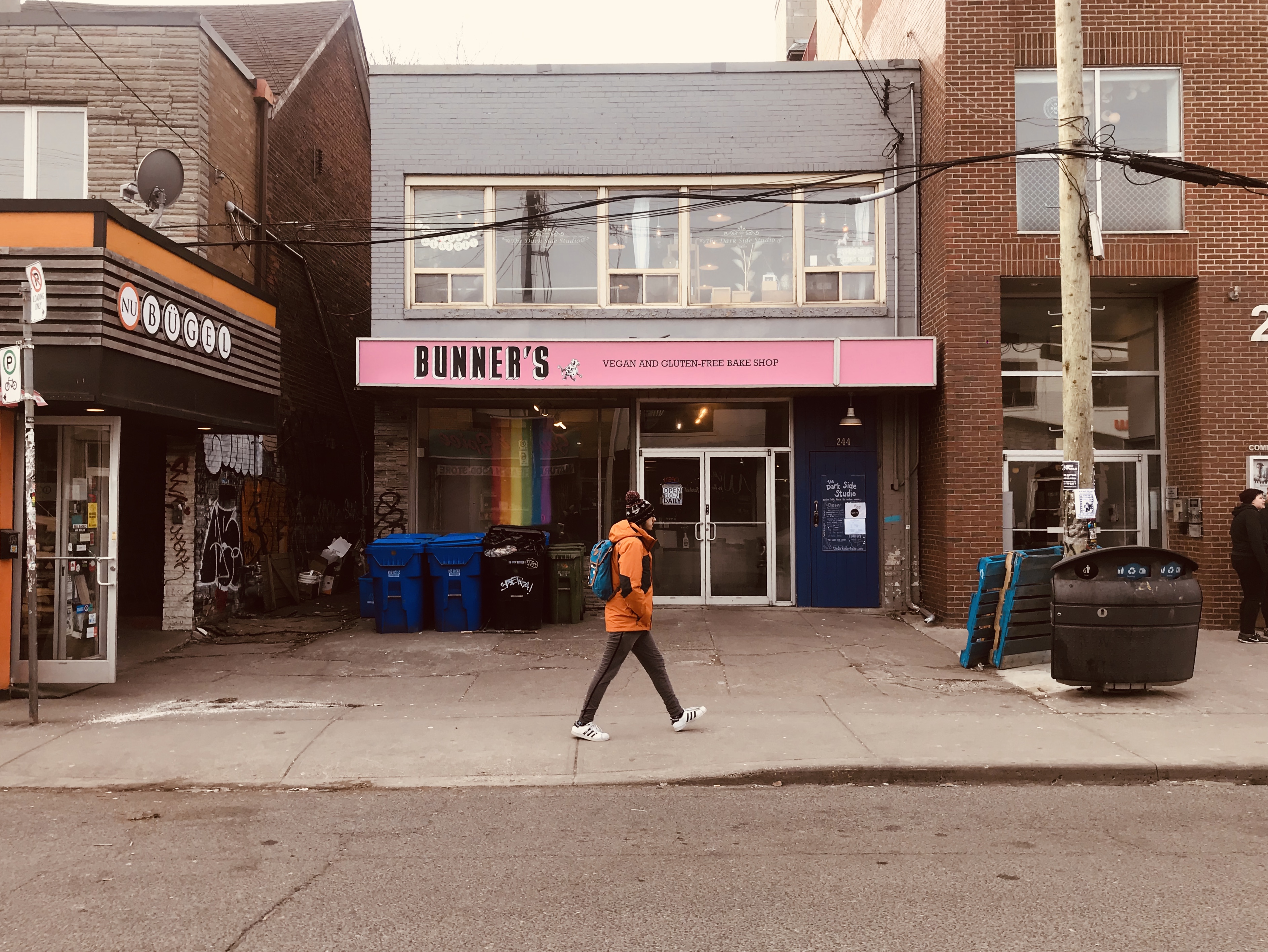 On Friday nights in Toronto, you can see some of the best poets in the country read their work, for free, at the city’s poetry-only bookshop knife | fork | book. The shop shares space with a belly-dance studio on the second floor above a vegan bakery in Kensington Market; when you reach the top of the stairs, Jeff Kirby, the store’s owner, welcomes you and politely lets you know that shoes must be removed. The space is all soft light and hardwood floors, a mirrored wall makes it look larger than it is. In the front corner, overlooking the Market, are the shelves and carts that make up the retail section and that can be tucked away when the studio is used for dance. 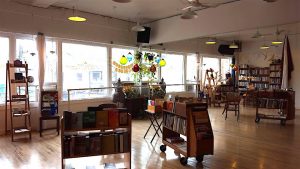 On the night of October 19, there’s a microphone in the middle of the studio surrounded by a semi-circle of thirty chairs. Kirby bustles around chatting with regulars and finding seats for the overflow and getting bottles of water for the readers. They ease the door open when they hear someone coming up the stairs, so the reader isn’t interrupted by noise. Kirby offers their seat to latecomers and proceeds to MC the night, introducing the readers, Jenna Lyn Albert, Chris Bailey, and Janet Marie Rogers, who have come to read at KFB from Fredericton, New Brunswick; Hamilton, Ontario; and Victoria, British Columbia, respectively. Kirby introduces the space, welcomes first-timers, and is quick to defer attention, reminding everyone that KFB’s slogan is “Powered by Poets,” and that, as much as it can seem like the Kirby show sometimes, the space is nothing without them.

A Handbook of Disappointed Fate by Anne Boyer

The Next Wave: An Anthology of 21st Century Canadian Poetry by Jim Johnstone Ed.

On High by Neil Surkan

A Sea Above the Pains Of Our Youth by Alexis Marshall

The True Confessions of Buffalo Bill by Paola Ferrante

Beasts of the Sea by Kate Sutherland

While Standing in Line for Death by CAConrad

Heaven is All Goodbyes by Tongo Eisen-Martin

As true as it is that the shop could not exist without the poets, Kirby is also being modest. Now two years into its existence, KFB is synonymous with Kirby; their personality extends to every aspect of the store—the welcoming atmosphere, the beautiful poetry displays, the wonderfully curated Twitter and Instagram feeds that have extended the reach of the store beyond Toronto to make it a country-wide destination. Kirby does all this in service of the poetry. It is promotion at its most genuine, an honest sharing of something loved. You can’t walk into the shop without getting sounded out on your interests and guided toward a book of poetry they think suits you. In all my visits to the shop, Kirby hasn’t steered me wrong once.

Kirby is new to bookselling, but it’s a job they’ve been angling toward since they began a second career in library sciences over a decade ago. They wanted to move into a job that brought them closer to books, but a jump into libraries came at a bad time and Kirby was never able to find a steady job, instead bouncing around from contract to contract until they took matters into their own hands: Kirby eventually found an empty room in their housing co-op and opened a library-and-events space as a sort-of resume, to show what they could create.

The City Park Library was, for all intents and purposes, Kirby’s proto-KFB. Its aesthetic would be familiar to anyone who’s been to KFB—prominently displayed books, warm lighting, comfortable seating—the programming that would carry on to KFB started there—poetry readings, workshops, and classes. Kirby also started a small satellite operation, a book cart that they set up at a few places around town, including outside of Kensington’s Orbital Arts Gallery. The latter location set in motion the first of a series of “happy coincidences” that led to KFB.

One of Kirby’s regulars at the book cart was Richard Ilnycki, the owner of Rick’s Cafe. The two became close over their love of literature, and eventually got to talking about life plans—Kirby was tired of working multiple contracts; if Kirby was spending all their time working for little money doing something they only kind of enjoyed, they might as well spend all that same time working for little money on a project they loved. Kirby pitched setting up a poetry shop in a corner of the café as a way to make Rick’s something more than just a coffee shop. Rick liked the idea, and KFB sprung into existence.

The early support of established poets such as Hoa Nguyen, who launched her book Violet Energy Ingots at one of KFB’s first events (and with whom Kirby studied poetry before opening the shop), put KFB on the map right out of the gate. Kirby wasn’t surprised by how quickly KFB became an established venue; one of their contracts had been as digital marketing/social media assistant at Tightrope Books, so they knew that there was a dearth of long-term support for poetry. There were readings and launches, of course, but not the sustained support that Kirby offered. “There is no promotion after the launch,” Kirby says. “There’s no follow up. Very little reviews. But at KFB, poetry is front and centre. Poetry should be treated like any other bestseller.” 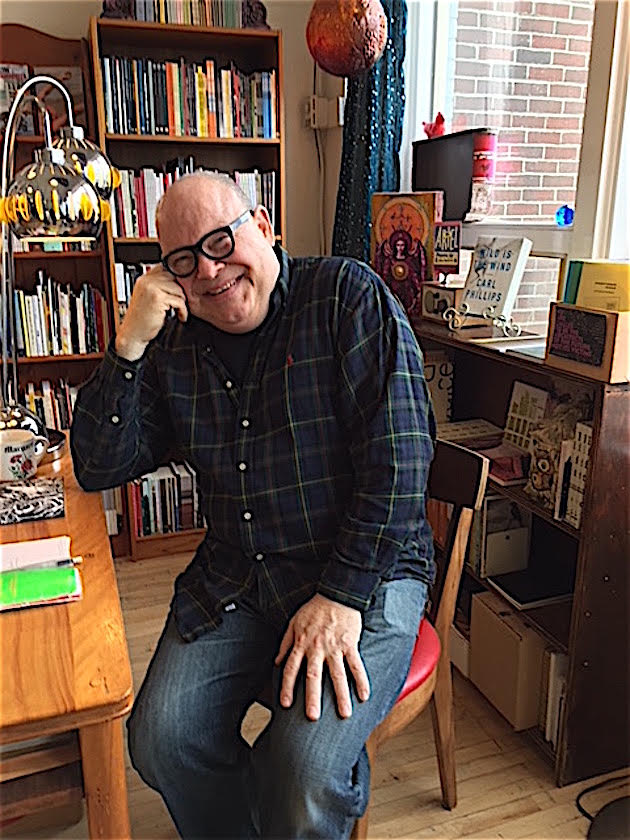 Poets react well to this treatment, and it’s made KFB one of the top destinations for poetry readings in the country. Fredericton-based Jenna Lyn Albert first heard of KFB through Twitter—Kirby is an avid online promoter; their photos of the shop and the readings convey the energy of the space—so when it came time for a Toronto launch, KFB was her ideal location. “Reading at KFB was a dream,” Albert says. “[It’s] unlike any other poetry venue I’ve encountered. It feels like a home the moment you take off your shoes and take in the decor, the wall of mirrors, the bookshelves, and, of course, the joy that is Kirby.” Janet Marie Rogers, the Mohawk writer from the Six Nations Territory who headlined the night Albert read, was equally impressed. Looking for a venue to launch Rogers’ fifth book of poetry, As Long as the Sun Shines, her publisher reached out to Kirby and found out that KFB wasn’t just available, but that Kirby was a fan of Rogers’ work. It’s that sort of deep knowledge of the poetry scene that sets Kirby and KFB apart—KFB isn’t only providing a space for poets, it’s providing a loving home.

Despite the mutual support between KFB and the poetry community, there’s a limit to how successful a business selling the most not-known-for-making-money genre in a not-known-for-making-money industry can be. But while it’s a struggle Kirby is happy to take on—”I certainly didn’t get into this for the money,” they laugh—it also gives KFB a certain precariousness. Sharing space is a challenge; when Rick’s sold last year, KFB was almost homeless until Audra Simmons stepped in and let Kirby move into her studio. And though Kirby is pleased overall with the move (the extra event space is a bonus), being in a café helped with foot traffic, which is tough on a second-floor.

It’s an additional challenge that KFB is a unique business in an industry that has difficulty adapting to outliers. Book distributors, especially, have baffled Kirby. “Not a single distributor has sat down to explain to me why I’m better off dealing with them, [they]come in, sit down, drop of their catalogs, with a form I’m supposed to fill out, and I’m expected to go through those hoops.” It doesn’t work for KFB—the salespeople have no real love of the titles they’re selling; often haven’t even read the titles they’re pitching. It’s a position in the chain Kirby doesn’t get—writer writes, publisher publishes, seller sells—why is there a fourth person in that chain, selling to the seller? So, KFB deals directly with publishers and authors. It creates more work, but Kirby knows what they want to sell. 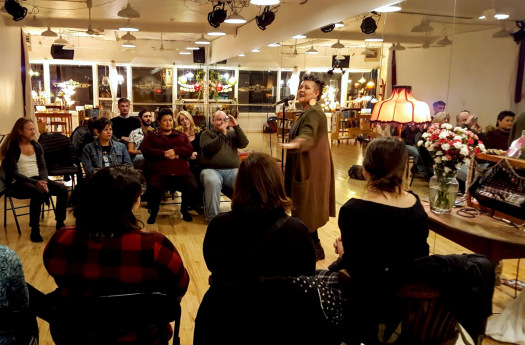 To counter the challenges, Kirby has become adept at finding new ways to bring in customers. Having noted that most sales are generated on event nights, Kirby makes sure the space is frequently in use so that there are always people in the shop. Poetry classes and information sessions are planned, and KFB’s first ticketed event, poets in conversation with CAConrad and others, took place in November, with similar events to follow. The KFB-hosted reading series What Queer Reading will become an imprint in 2019, and poets-in-residence will be in the shop to recommend books as a “human library.” Reading groups and more off-site events are planned, and the KFB chapbook imprint has attracted authors such as Hoa Nguyen, CA Conrad, and Bill Bissett for 2019, and will be expanding to include full-length collections, with books by Jonathan Garfinkel and Dale Smith to come in 2020. In the longer-term, Kirby is hoping to move to a co-operative ownership model and, ultimately, find a space that can be solely KFB’s.

It’s an ambitious plan, but Kirby and KFB have come at a good time for poetry. A new generation of readers is discovering the form and poets are appearing on magazine covers and bestseller lists. Kirby sees the success and building energy around poetry and has his theories on why it’s taking off. “I think people are connecting with voices that make them stop,” they say. “Everything is such a rush these days. Everything is imposing. And people are looking for still points. And poetry works to create a still point and reminds people to be reflective.” And with that, Kirby has defined what has been achieved with KFB—it’s a place to stop, be still, and find beauty.