By Emily Donaldson on April 21, 2022 Profiles in Bookselling, Web Exclusive 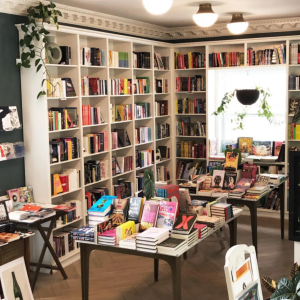 I walk into Librairie St. Henri on a bright, snowy February day. The store gets a lot of natural light. There are plants in the window. It’s well-kept, with a stark black-and-white interior that feels as well-appointed as a magazine spread. Frankly, places like this intimidate me, so I’m delighted to find that I know almost all the authors they’re stocking. The bookseller is a quick talker and a little arch–charming qualities. And all booksellers should be charming, one way or another.

Librairie St. Henri is doing well, which is great to see, given all the drastic changes in this neighborhood in the last ten years. When I lived here, my friend Russell got stabbed in the arm for his iPod while going for a run along the Lachine Canal. Earlier the same year, a body was found in the trunk of a car on my street, and the year before, my friend Dylan was attacked and robbed in his own ground-floor room. It wasn’t the safest neighborhood: not one where I’d expect to find an excellent bookstore stocking French or English books. 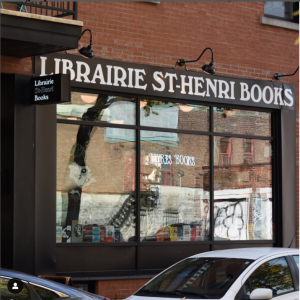 St. Henri’s anti-gentrification window smashings and graffitied storefronts, probably the work of Anglo anarchist squatters from Fattal around 2015-2016, are receding into the past. Local St. Henri business owner Corey Shapiro’s vision of gold BMWs and $500 vintage haute-couture glasses is no longer on-brand either: too tacky. As you get off the long escalator into St. Henri Metro, you can still read the title of Gabrielle Roy’s novel Bonheur d’occasion in the brickwork; a novel set in St. Henri in the 1940’s, that describes the struggles of a young working class woman who supports her parents and siblings by waiting tables. The novel sold well and was widely read, in its original French as well as in English translation as The Tin Flute. Alex Nierenhausen, the Librairie St. Henri manager I spoke with, described Roy’s novel as “depressing”, but it was a faithful depiction of the neighborhood’s poverty. More recently, St. Henri has become a fractured, half-gentrified neighborhood of working-class francophones, historic Black and Irish anglophones,  new immigrants of colour, and condo yuppies. I wouldn’t have expected a bookstore selling new books to be successful in this neighborhood; many of Montreal’s successful anglophone bookstores are second-hand stores, placed to attract students, or in the middle of historically anglophone neighborhoods.

Urban development and gentrification are part of the story of St. Henri bookstore, because it came about when its owner Anthony Benda (of Cafe Myriade fame) wanted to expand from his successful coffee-shop across the street, Cordova. He had the opportunity to benefit from a municipal grant or tax break, but only for a shop geared towards culture. That stretch of Notre Dame is already stacked with cafes, as well as tapas, tacos, and ramen joints (it also boasts some of the city’s best pizza, at Adamos). So, in March 2018, Librairie St. Henri opened with bilingual stock in equal proportions and an Anglophone manager from the West Island who spoke some French, but didn’t feel confident in it. The balance has shifted now—mostly English stock, with some carefully selected Quebecois literature, and Alex has become fully bilingual. To my surprise, the reduction in the proportion of French stock was because the shop’s francophone clients come in to buy new books in English.

Everywhere you look in this bookstore, there’s a book worth knowing more about. Or a book you’ve heard of, or a book by writer you’ve seen making in-jokes online: Jordan Tannahill: tweeting “the sissy teen chapel”, or Patricia Lockwood: on nudging her cat with her foot, “jail for mother for 1,000 years”. Local genderqueer Metatron and Metonymy press darlings like Alex Manley, Helen Chau Bradley, and Eli Tareq El-Bechalany Lynch—who all use they/them pronouns—are all represented—as are higher-profile transfeminine CanLit stars like Kama La Mackerel, Kai Cheng Thom, and Vivek Shraya. It’s great to see these authors represented all in one place. The store management values its relationship with Canadian small presses, and other independent bookstores.

Located in the historically Black Montreal southwest, the store stocks work by Canadians on Black history and police brutality, Black pride and Black heritage: books like Desmond Cole’s The Skin We’re In, Robin Maynard’s Policing Black Lives, George Elliott Clarke’s fiction, and Shanice Nicole’s children’s book Dear Black Girls. They could use some of Canisia Lubrin’s award-winning poetry. If you need more background on constructions of race, they also have Frantz Fanon. After the Black Lives Matter street protests of 2020 against police murders, the store had an influx of orders for books about race, history, and justice, which they were already stocking.

Alex chats on Instagram with four other booksellers of similar bookstores, two of whom are working own books: Joshua Whitehead’s Making Love with the Land and Jason Purcell’s Swollening. He says Glass Books in Edmonton is their sister store, in terms of mandate, which he describes as hyper-curated, with an emphasis on writers of colour, and queer writers and female writers. It’s been a successful formula, according to Alex. Librairie St. Henri is unapologetically stylish and quick to pivot. 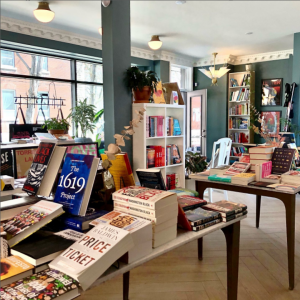 The store, as “LSHB,” also sells books and merch online, since the pandemic started. It offers local delivery, though it has sent its books as far as Australia. The shop also has a podcast, Weird Era, which replaced their in-person events at the beginning of the pandemic. Hosted by the marvellous Sruti Islam, a seasoned book publicist, the print journal which shares a name with the podcast sold out a 150-issue first run in the fall, even at $28 a pop. They stock local zines, graphic novels, and lifestyle journals like Kinfolk, alongside tall-format art books by Farrar Straus & Giroux and Phaidon hardcovers. I was glad to see indie publishers Flat Iron Books and Black Rose Books alongside the big dogs like Hachette, Penguin, Simon and Schuster.

Librairie St. Henri Books has something for everyone, but millennials are their core clientele. They also serve Gen Z. Alex explained to me that Tik Tok is a source of buying information for him. He follows hashtags like hot girl reading summer, to find out what the younger audience is interested in, and the books discussed there sell by the dozens. He wanted to point out to me that the next generation are big readers; not necessarily during school months, but certainly in the summer. Book buyers of an older generation will also find good reading material. Books by popular essayists like Susan Orlean, Rebecca Solnit, and Jia Tolentino are on display. For readers interested in formerly out-of-print books or novels receiving critical notice—New York Review of Books reprints are in stock, as well as lauded novels like Alexander Chee’s Edinburgh. They have Shirley Jackson, Ralph Ellison, a bunch of James Baldwin, Kafka, Truman Capote, Mordecai Richler, Donna Tartt, Amor Towles and David Mitchell, if you want to pick up something reliable and vetted.

Librairie St. Henri’s success is due to all these things; new selling strategies, outreach to authors and publishing houses, familiarity with new media, and engagement with contemporary topics. It’s heart, however, has always been its indie approach: handselling, and engagement with the community. Staff remember what you’ve bought and will ask you for a “book report.” They know what they stock and why. For a store just reaching its four-year anniversary, Librairie St. Henri appears to have a bright future. I wish every indie bookseller took on its mandate with this kind of imagination. A bookstore can and should feel like a little treat for yourself, along with its more high-falutin purposes. This one does.

—Elisabeth Gill is a freelance writer who lives in Montreal