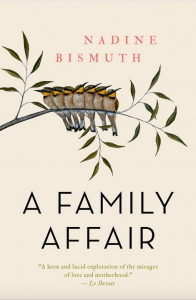 Ubiquitous greeting-card racks promote lofty sentiments about friendship, romance, and marriage (i.e., “Your presence makes life worth living!”), but even a child knows that perfection isn’t a constant state, not nearly. It’s aspirational, as sellers of costly apparel say, something to yearn for during the commute… or while microwaving dinner, shopping at Winners, or swiping though dating apps. Amusing and farcical and gimlet-eyed, A Family Affair makes the most of that troublesome gap between the ideal and the everyday.

Nadine Bismuth’s novel scrutinizes the exalted promise of friendship and marriage, of a career, parenting, and romance. Bismuth’s emergent view might be considered hopeful… if you imagine Hope as a community stuck in a wilderness and besieged by hostile elements.

For the Montreal-based author of the GG-Award-nominated novel with the covetable title Are You Married to a Psychopath?, the gift of reason is a kind of Trojan horse for her misguided and misbehaving (but well-fed and attractive) characters.

While reason allows Bismuth’s Montrealers to track criminals, run businesses, post to-die-for vegan dessert recipes online, and design magazine-ready kitchen renovations, its powers are such that it can both do and undo, create and destroy. For the latest mistress of a married man inclined towards affairs, for example, reasoning inspires this email: “What’s more, you’re not going to like what I’m about to say. You hate ultimatums, but I’m giving you one anyway: Christmas. That gives you almost five months to get your act together.” Assumedly read and reread, the email-writer’s request seems perfectly reasonable. Likewise, for the woman married to this desired (and yet unappealing) man acting on perceived loopholes in his marital contract, choosing a couple of tit-for-tat trysts makes perfect sense too: “It just adds up,” the woman’s reasoning faculty appears to conclude.

A Family Affair gathers together a clutch of capable, well-dressed, and upwardly mobile professionals in their early middle years. All have adult responsibilities—careers, aging parents, children, spouses or ex-spouses, complex schedules to balance.

After the novel opens with the email ultimatum, we focus on Magalie, who’s explaining to her doctor how her husband’s straying left her in such a state of disarray that she felt “the only cure available” to her was reciprocation. The rest of high-end kitchen designer Magalie’s day is marred by minor worries: a housecleaner who’s ghosting her, news about her widow-mother’s sudden romance, memories of how naive she was to have once been impressed with her husband, Mathieu, and his “sophisticated indifference.”

Chapters pivot between Magalie and Guillaume, a veteran police officer residing in Sainte-Julie, a “suburb with no class.” Despite being a straight-shooter (“I’m a kind of concierge for high society,” he explains, “I remove impurities”), Guillaume nevertheless struggles to manage relationships (an intrusive ex, a phone-fixated teenage daughter) and work while lurching toward an uncertain future, one in which he yearns for romance as well as a better neighbourhood.

Oh, and in the meantime: a better kitchen. Soon, Magalie is studying Guillaume’s floor plan.

After launching a series of clever plot elements that range from anonymous texts, fallout from anti-depressant side effects, and a pregnancy announcement to secrets and secrets revealed (not to mention blackmail, hush money, scheming underlings, shocking revelations, sprinklings of ultimatums, and not a few misunderstandings), Bismuth then captures the inevitable collisions. She even folds in the seeming tonal outlier of a subplot involving the case of a missing woman, Annabelle Juneau, the subject of countless social media pronouncements who eventually becomes “a barometer of a deeper societal imbalance.”

Even better than the expert plot architecture and the pleasure of observing well-meaning people lose touch with their moral compass are the reflections and late-night philosophizing bouts of Bismuth’s characters, especially Magalie who, between amuse-bouche samplings of tomato reduction on a basil-parmesan sponge and sourcing a just-so countertop for a renovation, stops to ponder her “catastrophic situation” (which eventually changes to “situations”). As Magalie’s personal disarray worsens, the bon mots grow sharper and then positively jaded.

They’re delightful nonetheless: “When you seriously think about it, that’s probably what aging is: the realization that nothing is ideal, the swallowing of desires and expectations, the privileging of others’ needs over your own”; “Some days I regret not having become a specialist in bathroom design, a room most people prefer to use alone and with the door locked, face to face with themselves and the foul-smelling truth”; or “it suddenly strikes me that love is a phenomenon that, no matter what the story is, rarely creates happiness, instead leaving us bereft.”

Farcical goings-on and lip-puckering hypotheses: what’s not to love?