By Emily Donaldson on November 29, 2018 Reviews 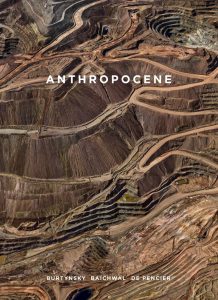 The Anthropocene Project is nothing if not ambitious. Produced by longtime collaborators Edward Burtynsky, Jennifer Baichwal, and Nick de Pencier, it includes this book of photographs and essays, a documentary film, and two exhibitions—currently at the AGO in Toronto and the National Gallery of Art in Ottawa—that feature the use of such cutting-edge technologies as augmented reality installations and 360-degree virtual reality films. Its goal is ambitious too; according to the heads of the three sponsoring organizations, “this rigorously researched project invites viewers to bear witness to how the planet has been irrevocably transformed by human activity.” They go on to claim that “we have no doubt that our audiences will leave with an unshakable sense of awe and responsibility.”

The genesis of the project was a question posed by Baichwal to Burtynsky: “What if we could make ‘anthropocene’ a household word?” Yet the term itself is a fraught one. There is still no agreement in the scientific community about what we might call the Age of the Human, or even when it began. Two scientists from the Anthropocene Working Group contribute an essay outlining the evidence for their claim that we are now in a new geological epoch—evidence that forms the framework of The Anthropocene Project. But as art historian Karla McManus points out in her contribution, the term has cultural and social connotations beyond those of the hard sciences. Some commentators have pointed out the hubris of naming an epoch after ourselves; others have noted that the term emphasizes the human—anthropo—above all else on the planet, which is exactly why we find ourselves in our human-altered epoch in the first place. Cultural theorists like Donna Haraway have argued for the use of the term Capitalocene, meant to acknowledge how nature has been commodified by capitalism’s powerful economic forces.

The environmental philosopher Kathleen Dean Moore has noted elsewhere that “the situation merits its own name, and so something like the Anthropocene makes sense. But we should use words cautiously. Words are powerful, magical, impossible to control. With a single misguided phrase, they can move a concept from one world into another, altering forever the landscape of our thinking.” She points out that “we don’t name new epochs after the destructive force that ended the epoch that came before… The next epoch, if it has a name at all, should be named after rock bearing the evidence of what comes next. That will not be us.” In fact, she suggests, witheringly, that we could name it the Obscene Epoch—from the Latin ob– (heap onto) and –caenum (filth)—”after the layers of rubble that will pile up during the extinction of most of the plants and animals of the Holocene—the ruined remains of so many of the living beings we grew up with, buried in human waste.”

With its striking cover photo of the vast workings of a silver mine in New Mexico—a photo that appears almost three-dimensional—Anthropocene (the book) is emblematic of the contradictions embedded in this project. For a start, how do we read the photo? As a purely aesthetic experience, given its sinuous lines and coppery tones? As a testament to human ingenuity? Or as one example of the destruction we have wrought? Like many of the photographs reproduced in the book, the aerial perspective enacts distance, aloofness, cerebrality—key characteristics of the very hubris that The Anthropocene Project is presumably critiquing. 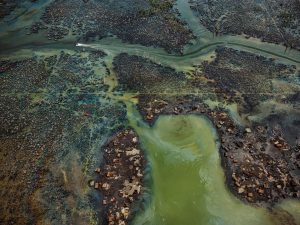 This reading is reinforced by a comment from Nick de Pencier about the collaborators’ choice of lens-based media. “[They are] the most technological, most anthropogenic, of the art forms, and that is why we feel confident deploying them for this project.” Were the project’s creators aware of the profound irony of distancing viewers even further from the world around them by creating such simulacra of it? This enchantment with technology is immediately evident in the four-page photo spread that opens the book, showing a camera fastened to the front of a train in order to capture the Gotthard Base Tunnel in Switzerland—the experience of machines rather than humans, in other words.

Karla McManus cites the visual culture theorist Nicholas Mirzoeff on the difficulty of visual representation of the Anthropocene: “[I]t enforces the authority of a Western aesthetic mode rooted in imperialism … and the conquest of nature rather than activating resistance” (my italics). She adds that “for Mirzoeff, Anthropocene visuality produces a kind of anesthetic, which numbs our awareness of the actual physical conditions of the Anthropocene, and must be fought against through the reclaiming of the imagination …” Such an act “reclaims the right to see what there is to be seen and name it as such: a planetary destabilization of the conditions supportive of life …”

Edward Burtynsky argues, rather tautologically, that “immersive engagement with our work can shift the consciousness of those who engage with it … [it]can spur a broader conversation about viable solutions.” Although Jennifer Baichwal recognizes the limitations of this approach “because you can argue that the scale and rapidity of planetary destruction requires … something that more stridently signals emergency,” she still believes that “exploration” and “conversation” will provoke “transformation.”

Events, however, are overtaking The Anthropocene Project. In September, fifteen-year-old Greta Thunberg went on “climate strike” at her Stockholm high school, a decision that has inspired students across Australia and elsewhere to do the same. In October, a new UK-based movement, Extinction Rebellion, issued a Declaration of Rebellion to hundreds gathered in Parliament Square in London. Describing itself as “an international movement, using mass civil disobedience to pressure governments to enter WWII-level mobilisation mode in response to climate breakdown and ecological crisis,” it is organizing an ambitious series of strikes, gatherings, and other actions intended to cause major disruption across the UK. It has been endorsed by dozens of academics, scientists, and Green Party politicians, and is scaling up its nonviolent movement globally.

As Extinction Rebellion observes, “Polite lobbying, marching, voting, consumer- and shareholder-activism, have all failed. We are now on the brink .… the only option left is civil disobedience, to disrupt the ordinary working of things, so that decision makers HAVE to take notice.” They add, “The time is ripe, right now, and we are confident that this is the beginning of the movement which will finally turn the tide.”

Days after Extinction Rebellion launched itself, a youth-led group called the Sunrise Movement occupied the office of several Democratic representatives in Washington, demanding a “Green New Deal” as humanity’s “best chance at survival.”

“Our generation is done waiting,” said a twenty-one-year-old protester named Ben. “If not now, when?”