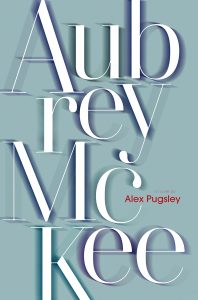 There are two words on the cover of Alex Pugsley’s Aubrey McKee that strike a discordant note in retrospect. Not the book’s title, nor the name of the author. The two words are: “a novel.” The commercial impulse to define a fictional work as a novel rather than a collection of linked stories is understandable, given the demonstrated lack of sales potential for any story writer in Canada whose last name is not Munro. And granted, Pugsley does go some way in threading his segments more tightly together than some who have opted for the “linked stories” designation. But the fourteen chapters in Aubrey McKee could each stand on its own with very little in the way of reworking. Indeed, many of them have: individual sections of the book have appeared as discrete stories in this magazine, as well as The Walrus, The New Quarterly, Brick, and other literary journals. “A Day with Cyrus Mair” and “Wheelers” were selected for the Best Canadian Stories anthologies in 2018 and 2019, respectively.

The distinction is not merely academic. A reader has different expectations from a novel than from a story collection. Expectations regarding character arcs that develop across the entire work, plots that continue or intertwine subtly but organically, and a momentum that carries the reader forward and impels them to keep reading.

This last is perhaps key to a consideration of Aubrey McKee. While short stories tend to have a greater latitude in allowing for little action or incident—their compact form emphasizes style over substance, permitting a writer to get away with being a bit less rigorous in moving things along on the surface level of plot—a novel tends to want for these things. Each individual piece in Aubrey McKee comprises a careful, highly stylized work of refined prose that is admirable on its own, but in combination produces a lethargy resulting from the relentless interiority of the narration and its relative monotony over close to four hundred pages.

If novels tend to cry out for incident, Aubrey McKee is a book in which nothing much happens. We follow our eponymous protagonist’s first-person narration retrospectively as he looks back on his childhood, adolescence, and early adulthood among the well-heeled ne’er-do-wells of Halifax in the 1970s and ’80s. Aubrey’s actress-mother and lawyer-father separate, get back together, and separate again; he does stints as a small-time drug dealer and musician in a punk band, and consorts with a various cast of eccentric peers, including the lovely but unattainable Karin, girlfriend (then ex-girlfriend) Gail, minor hood Fudge, and—most significantly—an ersatz toff named Cyrus Mair, who becomes the key influencer in Aubrey’s life.

None of the characters besides Aubrey (and arguably Cyrus) become anything more than shades wending their ways in and out of the narrative; Aubrey’s subjective narration is far too self-absorbed and introspective to allow anyone else a fullness of personality or being. Incidents that should be electrifying in their immediacy have their impact deadened by Aubrey’s relentless intellectualization and overly stylized presentation. Here, for example, is Aubrey describing an ostensibly raucous punk-rock show in a Halifax club: “The song in its first iteration is built around a descending progression from E to E-flat to C-sharp minor and back to E-flat, all played as barre chords sweat-sliding down the fretboard. Cyrus’s notion is to make two songs into one, fitting the first progression inside the chorus of ‘Dead End Ends,’ which, once transposed in key, proceeds from E to E-flat to C-sharp minor to B major.” This, to be clear, is a depiction of a concert that features songs titled “Head Case,” “Clanger,” and “Fandroid.”

Or elsewhere, we are confronted with this plangent description of a fart: “There followed a medium-pitched commotion from within the bedcovers—sounding like a sluggish blend of slide trumpet and soprano bugle… A soft, legume-y smell, implying in its organic history the green mulch of wet cow yards, dissipated in the air of the room.” The narration goes on like this, often in unbroken paragraphs that run multiple pages in length. It begins to feel somewhat akin to reading a biography of the Ramones written by Marcel Proust.

All of this has style to spare, and works well in small doses, which is why the generic classification on the cover is so confounding. Call it a collection of stories and provide the reader license to dip in and out sparingly, reading one piece at a time and then putting the book aside to allow the narration to marinate. It would feel less onerous, and a key line from “Fudge” would not seem like such a damning indictment: “Moods change—in the mercuriality of adolescence, relations flash from fear to boredom to laughter in a moment—but so little seems to happen.”