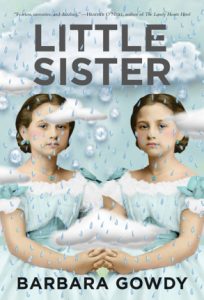 There’s a resilient myth that holds that great literary authors could write popular genre fiction or mass-market bestsellers but that they choose not to. By this logic, Henry James might have been Arthur Conan Doyle, he just wasn’t interested in writing detective stories (and really didn’t need the money).

Except this isn’t true. Popular and literary fiction – at least in our own time – are different kinds of writing, done by different kinds of authors with different interests and skill sets. There have been some attempts at crossover, often by “brand” authors looking to capitalize on different genre platforms. But these aren’t common, and usually far less successful than they’re given credit for.

Barbara Gowdy is a good example of a writer who can legitimately claim dual citizenship. She’s best known as a literary author (non-genre fiction, prizes and shortlists, Member of the Order of Canada, and Guggenheim Fellow), but her writing has an easy-to-read, page-turning quality that we associate more with the mass market. Little Sister may be her most accessible and, in many ways, her most enjoyable work yet. If it’s also her lightest and least meaningful that might have been the result of a trade-off.

The story feels drawn from the Twilight Zone. Rose is a woman in her early thirties who, along with her mother, runs a family-owned repertory theatre in Toronto. Rose is a bit young for a mid-age crisis, but as the novel gets started that’s clearly where she’s headed. Her misdirected love life is going nowhere, the retro-cinema business has hipster cachet but doesn’t seem to be a money-maker, and her mother is sporadically slipping into dementia.

Then, lightning strikes. Literally. Whenever the weather gets stormy Rose goes into a trance and makes a psychic leap into the body of a woman named Harriet, who works as an editor at a downtown publishing house. Harriet, it turns out, bears an uncanny resemblance to a grown-up version of Rose’s sister, Ava, who died in a childhood accident. As the body-hopping continues, Rose learns that Harriet is pregnant with a married man’s child, which has her considering an abortion. Rose, who can’t have kids of her own, would like to stage an intervention to save the baby, but finds this problematic given the difficulties of ever meeting Harriet, so to speak, in the flesh.

Some of this outline will feel familiar to followers of contemporary Canadian literary fiction. In my book, Revolutions, I discuss guilt and atonement as recurring themes in today’s CanLit. Little Sister certainly shares in this, as Rose nurses a lingering sense of guilt over Ava’s accident, and her mission to stop Harriet from having an abortion and choose life is presented as an opportunity to redeem her own scarred history. Once again, the Canadian hero is presented as someone dominated by the past, burdened by responsibility to the previous generation (Rose taking care of her mother Fiona), and looking for a second chance to make things right (the appearance of a second Ava). I don’t think it does any violence to Gowdy’s novel to see it as fitting this pattern, and it makes me wonder, again, about the pattern’s persistence. Is looking back with regret or entertaining the possibility of alternate lives just typical of middle age? By the time we get to the end of Little Sister, Rose has imagined herself “ten or a hundred or a thousand parallel lives over from the life she had started out on.” Anyone over the age of forty will be able to relate. But does the position Rose finds herself in also reflect something particular to our national psyche? I think it does.

Little Sister is not, however, a novel that wants us to think too deeply about such matters. My impression is that it’s not a novel that wants us to think deeply at all. Rose is a likeable Everywoman, and she’s surrounded by the kind of vibrant, mildly eccentric supporting characters that Gowdy has always been great at. I particularly liked the cab driver/bodybuilder who advertises as a “companion to women,” and the tough teenage girl gifted with a “third eye” of spiritual sight. Carrying everything along is an exotic and compelling tale of mystery and the supernatural that teases us with the facts in the case of Ava’s death (not revealed until near the end), and that draws out Rose’s pursuit of Harriet in a suspenseful and cinematic manner. At one point Rose even becomes a storm chaser, speeding through the streets of Toronto trying to catch the next bolt from the blue with help from the weather channel and her forecaster boyfriend. Will she be able to meet Harriet in time to change Harriet’s mind about the abortion? And what will happen if the two meet? Who will Rose “be” then?

The pages flip quickly as we near the end. Like all the best psychological thrillers, Little Sister reads downhill. And then…

Pop goes the novel. The ending has the upbeat but trite sentimentality of a network TV movie-of-the-week. We are left holding on to a simple parable about the work required to feel real empathy, the need to avoid judging others before first walking a mile in their shoes. This is thin. If there is an essential difference between literary and popular fiction it lies in the latter’s commitment to meeting expectations: providing an experience comfortable for being so familiar. To be sure, Little Sister is a well-crafted entertainment, but it substitutes fantasy for complexity and, despite its whimsical subject matter, never takes us very far out of ourselves.