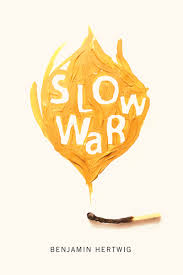 Hailed as being in the tradition of Wilfred Owen’s “Dulce et Decorum Est,” I imagined that Benjamin Hertwig’s debut, Slow War, published as part of the Hugh MacLennan Poetry Series, would place readers in the midst of America’s longest war for the duration of the collection. But Hertwig, a former member of the Canadian Armed Forces, does something more powerful. The speaker’s tour in Afghanistan spans only twenty or so vivid, quietly terrifying pages. “Iconoclast,” which opens and closes with the same lines: “the war is over / and we are still // here,” signals a shift. With characteristic sparse and rending simplicity, the double meaning is poignant—the speaker has both survived the war physically unscathed yet continues to inhabit a psychological space in which warfare is still very much alive. In a sense, all war is slow when you consider, as these poems do, its lasting bruise to the human spirit.

Slow War begins with a brief dwelling in childhood; brief, because the speaker is just barely past the green of adolescence when he heads off to war. In the biblical intonations of the opening poem, “Genesis,” the speaker witnesses a brutal scene on his elementary school playground: “I watch you kick / the dark-haired boy / in the stomach. / you kick him more than once. / you are familiar with violence. / he started it, you say.” The othering of the “dark-haired boy” and the childish justification of repeated cruelty is both chilling and familiar: how is such a sinister parallel between war and play hardwired into children from such an impossibly early age?

“First Kill” details the early inheritance of a masculinity that’s often tied to the experience and perceived inevitability of violence. When the twelve-year-old speaker’s grandfather runs over a small animal, he proceeds to cut its throat while insisting the boy watch: “I want you to see,” he says. After the act is done, the grandfather “wipes the blade on felt pants” and claims, “it had to be this way.” In a later poem, the adolescent speaker sits on his bed reading Harry Potter and the Prisoner of Azkaban and wondering if “the girls at school / will like [him]more / for having gone to war.” This is a young person who has by no means reached emotional maturity, who does not yet “understand / metaphors for breaking, being broken.” The reader understands, though, and suddenly heartbreak seems not so cliché.

I want to write that Hertwig’s collection has one foot in the Canadian prairies of his childhood (and later, wounded adulthood) and one in post-9/11 Afghanistan, but the turn of phrase feels macabre when you consider these words from the speaker of “A Compendium of Hands”:

in sleep
a hand is like    a foot
when it has been
blown off
awkward angles
and digits grasping
towards a meaning
its form no longer
comprehends.

Given the pressure to quickly recover and remodel a normal life (no matter how incomprehensible), one where you “marry the first person / who asks you not to / go” though they “never understood why / as a grown man / you pissed yourself when / you left Afghanistan,” the speaker sometimes feels “it would have been easier to die” more definitively. A bodily death would, at least, be a sort of release, a “sexless ecstasy.”

Despite this bleak aftermath, Hertwig’s collection builds toward a tender reconstruction that resists being overwrought. “Remember Your Body Again” employs the same structure as “Iconoclast,” opening and closing with the repeated lines “remember your body / again.” No longer dismembered parts, hands now return in a litany of sensuous experiences and comforting images (“lego on the floor” and “your mother’s hair”) charged with a redemptive power: “how cedar smells of god / and a Bach cantata / makes you almost / forgive / your hands.”

Hertwig’s hope, “not a byproduct or waste,” is hard-earned. In a later section of “A Compendium of Hands,” the speaker encounters “Omar Khadr / at a camping store / while trying to find / a tent” and recalls having heard someone say, “Omar Khadr should rot in jail / for the rest of his days.” In awe, the speaker “[reaches]out and [shakes]/ Omar’s hand.” “A Poem Is Not Guantánamo Bay,” dedicated to Khadr, acknowledges poetry’s shortcomings, its inability to stand in for the suffering of lived experiences. Meeting with Khadr to share a meal, the speaker asserts: “a poem isn’t even a decade later when you are not a soldier / and he is not in jail … a poem is not a way out of a poem, but the bowl before you is / a bowl.” The power here lies beyond the poem, in the one-on-one human connection it might initiate.

“A Poem Is Not Guantánamo Bay” echoes a poem in Canisia Lubrin’s astonishing debut, Voodoo Hypothesis. “If Today I Die,” addressed to “#TamirRice,” is both a eulogy, a reckoning, and a vigil, as “[e]ach curious twilight of the listed dead / on streets, still gather to watch the passing light / as the votive pixels wait.” Mourning the loss of a boy’s soul, described as “still licorice and action figures, an empire’s return on investment,” (murdered at twelve years old, the same age Hertwig experienced his “first kill”) Lubrin proceeds to give voice to Tamir directly by declaring his identity:

I am a black boy—amen—who can feel
the scour
of a coming exoneration the second I
become
the faint smell of a worsening wound
sealed shut. Sing for me, alright?

Readers now have more context for the hashtag—it’s both a musical score and a scored notching of another black life senselessly snuffed. It’s also the connective tissue linking the voices keeping Tamir’s song alive as they echo down social media’s “matrixed alleyways.” 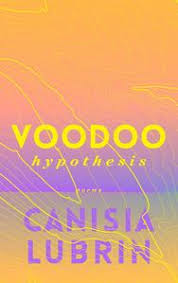 Voodoo Hypothesis does not feel like a first book. Lubrin merges the music of a strange, ornate syntax with Caribbean Creole, patois, and formal fragments. Each stanza—true to the Italian meaning of the term—makes us feel like we’re moving from room to room under the roof of something expansive, all encompassing. The result is a style that is as distinct as it is fully formed. Though dense, lush, and at times hard to parse, the work exudes a roving curiosity paralleled in the title poem’s chronicle of the Curiosity Mars Rover’s expedition to that planet. The poems are so rich and pleasurable that they earn a slow and considered attention. Readers readily sign on to “the erratic contract / of this anti-story finding language” as Lubrin re-narrativizes a complex and contemporary black selfhood with power, tenderness, and grace.