By Emily Donaldson on November 18, 2022 Reviews 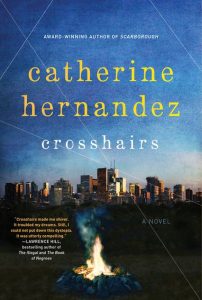 As much as it pretends to be about the future, or other worlds, dystopian science fiction is almost always about our current anxieties, and the ideologies that we think will fix them. Take, for instance, English novelist JG Ballard’s novels of the late 1980s and early 1990s, which were about the failure of modernism, of literal cannibalism in the midst of London’s suburban housing developments (Running Wild, 1988; Cocaine Nights, 1991). The anxiety of environmental devastation, the depth of the disparity between rich and poor, plus the failure of infrastructure, of cities symbolically being eaten alive from their outer suburbs inwards—were as much a commentary on Margaret Thatcher and her legacy of austerity as they were a discussion of the near future.

This trans-temporal, heavily localized view, which sees the future as the present, or even the past, makes special sense for Catherine Hernandez—whose debut, Scarborough, pitted the titular suburb against Toronto itself. Hernandez emerged as the central voice of an emerging Scarborough school—along with David Chariandy (Brother), Carrianne Leung (That Time I Loved You), Uzma Jalaluddin (for her Indian remix of Pride and Prejudice, Ayesha at Last), and Adrian de Leon (Rouge), among others.

It’s not that Hernandez is more ambitious than these writers, whose collective working out of the social networks in an oft-forgotten suburb is a necessary corrective to a Canadian imaginary that is often stale and male. In Crosshairs, however, Hernandez widens her outlook outside of the neighbourhoods she addresses, and even outside of the local or the “now” which other novels of that school have centred on.

I thought a lot about Ballard while reading Crosshairs. Mostly, I think, because it is a novel about cities, and the anxiety of what happens when cities fail—but it is also a novel of many ideas. The plot is relatively straightforward—in not-so-distant Toronto, there has been a series of devastating floods, the food supply has been disrupted, and the political order has descended into chaos, leading the federal Conservative government, led by Prime Minister Alan Dunphy, to commission a group of jackbooted fascists to commit to a cleansing of sexual and ethnic minorities dubbed the “Renovation.” A group of rebels violently push back against this genocide. Backstories and social context are elegantly weaved through. A wide range of genders and races are represented, including an Indian drag queen and genderqueer performer named Queen Kay, and two men who grew up in the exurbs, who fell in love as teenage hockey players, and one of whom was more out as an adult than the other. There’s a newcomer refugee, and a worker at the local trans community centre. In a short passage describing Toronto’s population gathered at the concentration camps built on Ward Island, Hernandez writes: “In queues several blocks long, every visible Other you could imagine—Brown, Black, Muslim, Sikh, Hindu, Trans, Queer—was standing alongside the harbourfront. Some were elders. Some were children. Some were crying. Some were listless. So many Others.”

Near the end of the novel, there’s a double cross when the wife of a major government functionary working for the resistance directs an uprising at a fascist rally at Yonge and Dundas Square. This crescendos into a world summit, where the resistance crew battles against the fascist prime minister in the middle of Yonge and Dundas Square. Unlike most YA novels, there isn’t a singular hero(ine) who is able to break through the system and tear it down. Instead, the novel ends as bleakly as those aforementioned Ballards.

In the midst of these central narratives, flashbacks give us Queen Kay’s trajectory from the suburbs to performing drag at a shitty backroom club in Toronto’s gay village to being forced into sweatshop labour and eventually to the camps on Ward’s Island. There’s a small, sweet passage about two teenage hockey players falling in love in small-town Ontario. In elegant, well-hewn prose, Hernandez evokes the claustrophobia of Toronto post-war apartments, of drag green rooms, and the feeling of spaces ranging from high-end restaurants to the island ferry. Crosshairs is a great Toronto novel, not just the Toronto of the financial district, or the gay village, or Bloorsdale, but of the island, and the industrial sections along Old Weston Road—and the places Torontonians have claimed psychically—including ONroute stations and cottage country.

The novel features chilling, well-observed depictions of Indigenous protests—Hernandez reminding us of the jackboots that quashed the autonomy of Indigenous communities in places like Ipperwash, Oka or Unist’ot’en—including a startling passage set at a protest near the Six Nations reserve on the Grand River. The passage is almost journalistic in style, and includes a long speech about Canada’s genocidal tendencies by Kay’s poet-husband, Nazbah Tom. Formally, it is an interruption, but conceptually the piece works well.

The central tension of Crosshairs is between the overwhelming violence of the state and resistance to it by queer folk, people of colour, and women using skills already learned in an oppressive world. It is a novel about code-switching, shifting, and reworking language, depending on who is in the room and how much power they have.

But it is also about the point at which this code-switching ends. One of the book’s smartest conceits comes when Queen Kay and Liv are meeting for dessert at a high-end cafe. The waiter is rude and ignores them. When they go to pay, first Liv’s bank card, and then Kay’s fails to work. Kay ends up paying the bill with cash from tips he made as a drag queen. The pair then go to the bank, where Kay learns his assets—like those of all the Others—have been frozen and stripped. Bank cards have been replaced with a card that also serves as a state ID. In a very “papers please” Ballardian manner, the card informs the state of your identity, affiliations, and assets, all in one swipe.

Overall, Crosshairs is riveting, tautly written, and carefully considered. In the middle of global climate change, coronavirus, economic disenfranchisement, and governments that lack the ambition to handle these crises; amidst, too, the rise of fascist or fascist-adjacent governments in the US, UK, Europe, and India, democratic ideals like smooth transition of power and/or protection of minorities aren’t even being given lip service. Hernandez, on the other hand, is paying attention, seeing the way the world seems to be going, and reflecting it back with a ruthless accuracy.