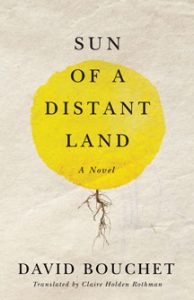 Canada’s immigration and multiculturalism policies are frequently criticized by both right and left, but what do those on the outside think? In Sun of a Distant Land, we get the view from Senegal:

In Senegal, these days, when someone mentions France or Europe, it doesn’t make anyone dream, whereas before, they were all ears and longing. Europe used to be their dream destination. When China is raised as an alternative, people are scared. […] But say the word “Canada” and it’s a totally different story: Canada’s a beacon. Eyes open wider, hearts beat faster. It’s like talking about the Promised Land, a distant paradise where people can get everything they want: money, happiness, safety, peace, education, freedom, all the good things lacking in so many countries around the world.”

Twelve-year-old Souleye and his family have moved from Senegal to Canada, not as refugees or asylum-seekers, but simply in the hope of a better life and prospects. Canada is not, though, the family’s first experience of the West. Souleye’s father grew up in France and his métropolitaine accent comes in handy when dealing with prospective, and possibly racist landlords (recalling Wole Soyinka’s poignant poem “Telephone Conversation”). Complicating the Western assumption that economic migration always constitutes progress for an individual is the revelation that Pa’s parents once confiscated his passport to prevent his return to France. He was furious at first, “[but to]this day Pa is grateful to his father. Senegal saved his life, he says. Most of his friends from Grenoble are in prison today, or dead.”

Before too long, the family has settled, to a greater or lesser extent, in Montreal. Souleye’s older brother, Bibi, fits in through hockey; his little sister Lila is so young that she quickly adapts to her new circumstances. His mother finds a promising internship with decent colleagues. Souleye, though, is slower to settle in. He befriends Charlotte, a lonely, isolated girl with a troubled alcoholic mother who experiences frequent crises. So when an ambulance turns into their street one day, Charlotte and Souleye both assume it’s another Denise incident – until they realise that it’s Souleye’s Pa being carried out on a stretcher.

The most adventurous member of the family, Pa has been slow to learn the painful truth of the Buddhist saying “Wherever you go, there you are.” He simply cannot settle on what he should do. When Mère gets angry with his vacillations, he sets himself to a proper job search – but it ends up being fruitless. And then, having hoped that moving to Canada would provide him with some direction, something in him gives up. He spends more and more time in the basement, upcycling found objects into furniture, until, gradually, he retreats there entirely. It’s when the family discovers that he’s digging a hole under the foundation of the house that Mère, officially at her wits’ end, decides to bring in the emergency services.

The novel is well structured, interspersing flashbacks of the family’s first year and a half in Canada with stories of how they manage during the long weeks of Pa’s hospitalization, how the three children adapt to their new country, and the story of Souleye and Charlotte’s developing friendship. While this is certainly an immigrant novel (one ably translated by Claire Holden Rothman), it also deals with a variety of suffering, mental illness, and coming of age. With its skilled writing, nuanced characterizations, and fascinating discussions of the linguistic and cultural differences between Quebec and Senegal – Bouchet was born in France and raised in Senegal and speaks fluent Wolof – it feels like the kind of novel we need more of.