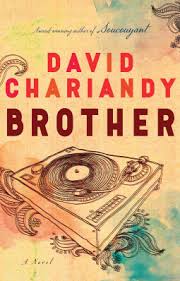 In the violence-prone suburban Toronto housing complex that serves as the setting for David Chariandy’s Writers’ Trust Prize-winning novel, the clustered, grim towers and low-rises—with names like the Waldorf, the Oberlin, the Rosedale—stand as mocking facsimile of a distant, glamorous world. The complex itself, a concrete jungle home to working-class immigrants from around the globe, is known as “the Park”; its local store, “Heritage Value” Convenience, is “run by that asshole who framed his useless foreign degree, despised the dark, stinking guts of every other immigrant.”

That sense of a parallel, fringe-dwelling world stays with us throughout the novel. A city’s suburbs are by definition on its outskirts, but what we feel in the Scarborough of Brother is the connotive dig of the prefix “sub”: lesser than, subordinate. The “dull purple” sky that hangs over the Park is “the wasted light of a city.” Here, the sun arrives as plate-scrapings.

The novel’s characters also exist, needless to say, on the periphery. You couldn’t say they’re on the outside looking in since the inside—mainstream white society—is barely referred to or glimpsed; except, perhaps, in the cops, “cold-eyed with purpose,” who, after a spate of shootings, undertake regular, intimidating sweeps of the neighbourhood. One of the few to escape is Aisha, an ex-girlfriend of the narrator who went to Montreal on a scholarship and is referred to by local parents as “the exception”; proving, of course, the rule.

Growing up in the Park in the eighties, Francis has always been protector to Michael, vulnerable because he possesses none of his older brother’s traits. Francis is street-smart, devastatingly handsome, tough-as-nails; when threatened with a knife, he grabs it by the blade. In his later teens, though, he gets swept up in the burgeoning hip-hop DJ scene based out of a mall barbershop and starts to distance himself from Michael and their black Trinidadian mother, Ruth, who works unpredictable and long hours as a cleaner. (Their father, a brown man from the West Indies, left when the boys were small but is rumoured to live nearby.) Soon after, Francis is shot and killed by police.

Brother alternates between the lead-up to this event and a point ten years later, with Michael in his twenties working a go-nowhere job at a grocery store so he can care for Ruth, now suffering dementia-like symptoms brought on by grief.

Francis and Michael’s relationship is the novel’s ostensible focus, but Marlon James’ declaration, on the front-cover blurb, that it’s an “elegy from a living brother to a lost one” doesn’t sit quite right. Brother lacks the basic qualities of an elegy, being neither a lament nor poetic—which is not to say Chariandy’s spare, finely calibrated prose isn’t impressive. And Francis is mostly a cipher. We know him through his actions, glean a secret that will complicate his life regardless of how tough he is, but we don’t really know him. Don’t, by extension, feel Ruth’s pain when he dies.

What Brother is really “about,” in its appealingly slant way, is the larger historical forces that led to this particular death, one among many. In the eyes of his neighbourhood, older Michael is “a brother carrying history.” That history is recent, but it’s also, we come to see, very old.

It’s also about origins, and the consequences when our ties to them—cultural, familial—are disrupted. For Michael, the black-and-white photos of relatives scattered around the apartment are “ghostly images that were supposed to explain our eyes and way of smiling, our hair and bones”; Trinidad the place that “accounted for the presence in our house of certain drinks like mauby and sorrel and also the inexplicably named Peardrax, which Francis had once fooled me into believing was bathroom cleanser.”

(Cleaning products are a bit of a theme. Next to and deep below the Park is the Rouge Valley, a “wound in the earth” where Michael and Francis go to escape the Park’s hard reality, and which functions, with its Lethe-like creek, as a kind of underworld in reverse. There, in a moment of pathos-infused comedy, Ruth holds a sprig of pine under young Francis’ nose. “Mr Clean!” he proudly announces.)

Creating connections is part of hip hop’s appeal to Francis and his crew. Cannibalizing their parents’ record collections for samples, they start to see the latter and their music in a new, even admiring light; in this world, the DJ is bridge-builder, his aim to find the common beat to unite these musical fragments into a coherent whole.

In his dive into hip-hop culture and elsewhere, Chariandy resists exposition. Instead he gestures, juxtaposes, borrows from his narrative environment, which is why Brother, for the most part, succeeds where many novels with similar aims fail. On the first page, Francis leads Michael up a hydro pole, promising the dangers will be worth the risk: “All that free air and seeing. The streets below suddenly patterns you could read.” The scene is echoed at the end of the book, when Michael, visiting Ruth in the hospital, encounters a boy who broke his collarbone falling off the roof of a building, and who, when asked why he did so, answers “To see.” These bookended descriptions express the need for distance and for perspective far better than any dialogue could.

Though Ruth often seems to be in the background, Brother might just as well have been called Mother, so central is she to the novel’s heart. Its most moving section, Michael’s account of the sole trip he and Francis took with her to Trinidad when they were little, provides a first, albeit indirect glimpse into her mind. There, snippets of overheard conversation make it apparent to Michael that his mother has not told their relatives that their father left years ago, that in Canada they are neither wealthy nor comfortable. The weight of her unspoken pride and pain makes clear, moreover, that she will not do so.

There too, the brothers see “billions of stars, the universe we had never imagined.” But they also discover, in a kind of colonial inversion of Foster’s Marabar caves, a shapeless new fear: “Something old and unburied in the darkness, something closer to us now than ever before.” A little further on, a kind of collision:

What was this place in origins we had come to? In the years to come, Francis and I would hear the words slavery and indenture. We’d learn that the Caribbean was named after people who’d been pushed by murder and disease to the very brink of oblivion. But what of these histories could we read in the land we saw as children? Around us were wasted farmlands and abandoned cane fields, punctuated by what looked like shacks. We heard our poor black relatives speak of coolies, our poor Indian relatives speak of niggers, and both sides huff laughter at the “the Carib woman,” our distant relative, who sold green seasoning at the market and was obviously half-mad.

“What is a mother’s dream of land?” asks Michael at one point. It’s an interesting twist on a familiar question: a mother is supposed to have dreams for her children, not “of land.” But other than a brief mention of a nursing degree scuttled by a lack of funds, the only proof Ruth harboured dreams of any kind is her very presence in the cold country to which she migrated so long ago. And here, perhaps, is part of Chariandy’s point: that answers rarely come without questions.