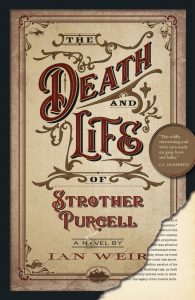 The Death and Life of Strother Purcell by Ian Weir
Goose Lane, 392 pages.

Ever gameful in The Death and Life of Strother Purcell, Weir intensifies his strategies. There’s practically a village of left-field characters: Aunt Glory, Old Cadaver, Judge Zebulon Collard, Missus Mann, Gimp Tom, The Man from Decatur, Prairie Rose, Brother Jacob Jacobson… and Drusilla Smoak, a crone renowned as a witch and given to prophetic utterances (“Your debt come due,” “Blood pays for blood”) that can wither crops and decimate livestock. Atmospheric locations (Hanging Tree Ridge, Hell’s Gate, Black Canyon, “a stinking diverticulum in the bowels of the City Lock-Up,” a “coffin-sized room in a verminous rooming-house”) are pummelled by bad weather or wafting stenches. Chock-a-block, the plot includes but is not limited to scenes of madness, whoring, lynchings, posses, bounties, arson, beatings, murders, advanced inebriation, identity swapping, vengeance avowals, carrion birds, and malefactors by the handful. There are “freaks and curiosities” in abundance. Upon the “rat-gnawed timbers” of this frontier world there’s “farting evilly,” an exorcism, and one “beautiful, brain-cracked Mama.”

Before all that, though, Weir introduces a framing device. His “Editor’s Preface,” written by D.G. Brookmire, a scholar at (fictional) University of Southwestern Cariboo who’s in “the last twilight of a long career,” describes a brief meeting with an elderly stranger in a parking lot during a January evening of lashing snow and bitter wind. From her he eventually receives historical documents and, after her demise, a manuscript of single-spaced typing that’s appended with a note: “To whosoever may be reading this: It’s true. All of it. Every damned word, more or less, except for the bits that maybe aren’t, so much. But the rest you can take to the godalmighty bank.” Brookmire determines that the mysterious woman—one Tilda Sturluson—was an untutored but diligent scholar who spent decades organizing numerous narratives surrounding the history of the titular character, a legendary figure in Western Canada and the United States. Chapter by chapter, then, Weir’s Death represents purported chronicles, journals, memoirs, and publications (with titles like High Crimes of the Outlaw Dillashay, The Accounting of Barry Weaver, The Sorrows of Miz Amanda and Her Two Brave Boys, and The Testament of Rebekah) written between 1874 and 1909. Though hardly necessary, Brookmire’s subsequent footnotes are liberally sprinkled with phrases drawing attention to the unknown or suspect authorship of many of the pages.

The novel’s front-loading prepares the reader for a topsy-turvy narrative of fragments and excerpts, all of which are of course ersatz. Although the documents are assigned dates of publication or locations of provenance (for instance, one document was found in a Philadelphia Salvation Army hostel in 1933, and belonged to an “elderly indigent known as ‘Crazy Becky’”), with sentences like “Fuckin’ wotcherself, eh? Fucker. Or someone gets a fuckin’ clout,” it’s clear that Weir isn’t aiming so much for a pastiche of Victorian literary norms as approximations with contemporary colour added. Also, because all the words may or may not have originated with Tilda Sturluson, interest in what’s authentic in this elaborately playful novel quickly subside. Nabokov’s Pale Fire might be Death’s distant ancestor, but Weir’s story employs postmodern techniques not so much to undermine the stability of narrative or to prompt Derridean questions about authenticity and origins as to, well, tell a whale of a tall tale hinged on two murderous American half-brothers separated as youths, whose paths cross with two wily siblings, decades later, in a snowbound roadhouse in rural British Columbia, and then cross again in San Francisco some twenty years later.

It’s rambunctious entertainment that’s closer in sprit to Patrick deWitt’s The Sisters Brothers than to Guy Vanderhaege’s The Englishman’s Boy. It’s funny but violent, murderous but lighthearted. Weir’s characters are a delight and the spinning plot admirably complicated. Just don’t expect to learn much about the Old West or to think too much about the tragic nature of vengeance.