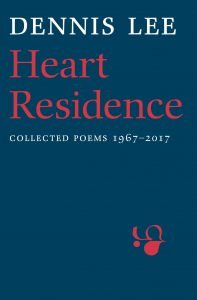 Kingdom of Absence, Dennis Lee’s first book of poetry, was published fifty years ago in 1967 and has never been reprinted, in whole or in part. Its title announced a subject which Lee has been exploring ever since; and despite the fact that his subsequent books ostensibly focused on civic life, on erotic love, and on the perils of life, especially urban life, in the twentieth century—getting and spending, as Wordsworth put it, and the psychic dismemberment those things can cause—his real subject all along has been God. Several times in his work Lee invokes the Latin word tremendum, the theological concept of awe and dread we feel when faced with the mystery of God. And although he more often bemoans the absence, in postmodernity, of the experience of tremendum—it seems to have vanished just as civic order has disappeared, or as the human respect and morality with which Lee grew up in 1940s and ’50s Toronto has gone—his need for it remains strong, as does his search for a rich and reliable manner of being in the world. Lee may claim in the third of his Civil Elegies that “it is two thousand years since Christ’s corpse rose in a glory, / and now the shiny ascent is not for us, [Tom] Thomson is / done and we cannot / malinger among the bygone acts of grace,” but in truth that is exactly what Heart Residence comprises: a malingering among the bygone acts of grace, an unceasing hunt for spiritual truth, for God. Lee never really left behind the pious Methodist teenager from Don Mills who aspired to be a man of the cloth.

The tessitura of Lee’s language is unusually broad. He will use logos and aevum and, again, tremendum, while also over-indulging in boyish slang—words such as “hoo boy” and “awright” and “yippee.” A typical Lee line will combine those two extremes of diction: “and snag apocalypse,” for example, or “Lost in the dark, with a slam-bang case of extremis.” The poems can sound like the equivalent of an inexperienced duck hunter filling the sky with shot in the hopes of hitting something, anything, metaphorically, God, or some sort of authenticity, even if it comes from trying to be someone you’re not. The love poems gathered in Riffs aspire to the instantaneity of jazz or the blues, and celebrate the body of woman (“woman,” “baby”) as a substitute for the body of Christ. The ecstasy feels willed and self-conscious (“the onus of joy,” “the / tasks of / passion”), too much a forced letting go that the poet is watching closely, like an observer rather than a celebrant:

But if I gain
beatitude galore, and lose the gift of
moral discernment,
how real are my rarified highs?

How real indeed? The impulse he describes elsewhere, the irresistible “whiff of carnal joy” with which “a man will come unhinged, / or try to cram the body of his longing / thru somebody else’s flesh into heaven, / to never be lonesome again” is undeniably real, and so truthfully expressed as to leave one in awe. But absolution and redemption, words that Lee invokes more than once in his work, are not, finally, to be found in the body of the woman, and sometimes the record of that search there leaves him inarticulate: “Even the speechlessest rockface deigns to utter its pendant climbers,” ends one of the Riffs in as ugly a line of poetry as ever a talented poet came up with and allowed to stand.

Although they have been lauded by some critics, Lee’s most recently published poetry collections, Un and Yesno, strike me frankly as unreadable. Having essayed a substitute eternity in sex and jazz, Lee turned to a kind of L-A-N-G-U-A-G-E poetry that achieves little beyond wordplay, as though he hopes, in the very cauldron of a kind of drunken vocabularianism, to find evidence of God at work. To my ear, the result is little better than babble:

Blah-blah was easy, we
diddled the scrutable chunks;
whole hog was beyond us.

Bugspace &
chugspace ahead,
welcome wormlandia.
The birds con-
trive a nest. The wolves a lair.
Sheer matricide is rare.

Undernot rising. Bad
OM, the
holes in the wholly.

Two whole collections of this sort of irritable reaching after fact and reason (if that’s what it is) are both too little and too much. With this style we are wrestled into a universe far, far removed from the Pindaric nobility and the reasoned diction of the Civil Elegies, into the “here and now” that Lee regrets denying as a twenty-something in the wonderful poem “Not Abstract Harmonies But.” In these poems, the Puritanism that plagues Lee’s consciousness from the very beginning, and the harsh self-criticism that it engenders (“I came by / generations of flesh and methodists to lucid dead-end”), leaves him in extremis indeed: there’s nothing left but syllables. If, at the very darkest moment of his dark night of the soul he can survive only by proposing that “You’re born; you jack off; you die,” then what’s left for a poet but gibberish?

By the end of Heart Residence, Lee admits that, having “trashed our sacramental / birthright,” what remains is an unappeasable hunger, a hunger for something he cannot name. The troubling title poem compiles the things of the world that have meaning for him—fellow creatures (“the bone fraternity / of things that are born and die,” he says memorably), place, and his “dear ones” (friends, family, women, children)—and then releases all of them in the unconsecrated certainty of “No / home but hunger.” No poet has been as articulate about emptiness, about the loss of what he calls “passionate awe in our lives,” as Dennis Lee. But what is a religious poet to do when “the breadcrumbs are gone,” as he writes in the final poem in his book? There is no saving grace in language itself, that much is obvious.