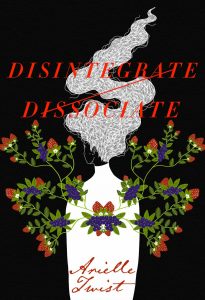 Arielle Twist’s elegant debut ends with a powerful postscript: “Ah-hay, my Indigiqueer and Two- Spirit kin, this is for us.” It’s a thank you, a declaration of communal ownership, and a fitting, defiant final note for a book of poems dealing with Indigenous ancestral memory and the effects of colonial violence. Reading Disintegrate/Dissociate is a kind of witnessing; the collection is instructive, often uncomfortable, and vital.

Twist writes in her opening poem, “Disintegrate or dissociate. / I will deconstruct myself, / and rebuild in her vision.” “Her” here is “our kokum”—grandmother—whose death causes “a rupture.” Building and rebuilding, life and death are repeated motifs; the poems detail the self-construction of a trans femme in a transphobic world, and they pulse with the drive to (re) build a cultural identity from the living pieces that have withstood Canada’s efforts at Indigenous annihilation. In “Under Uprooted Trees,” Twist writes about “losing track of / selves I killed, / buried”; in “In Dying I Become,” the speaker is “two selves / not whole, not mine / not quite yet // In dying I become, reborn” (italics poet’s own).

The poems can be disquieting—there is violent sex and sexual violence, blood, and the loss of self that comes when the human desire to be loved is at odds with social constructs of desirability. In “Dear White, Cis Men,” Twist writes “you are / the ones to decide / if I am fuckable / if I am smart / if I am worth love.” In “Who Will Save You Now?” she asks, “While these men choke you / beat you in bathroom stalls / crush your ribs against brick walls / in queer bars, downtown home. // Who will save you if you can’t save yourself?” Twist doesn’t shroud violence in metaphor or euphemism; there is no room for ambiguity or willful misinterpretation. It’s a political-poetic power move, at once bold and graceful.

But there is intense beauty in the poems, too, especially in those that address and adulate Nêhiyaw (Cree) kokums, mothers, aunties, and other relations. The collection’s two prose poems, “Brother” and “Is This My Home?” are especially poignant. There’s a terrifying vulnerability in them; Twist navigates the complexity of addressing a second person “you”—an alienated brother in one, “just another white boy I thought could love me” in the other—with enviable deftness.

The collection’s title suggests fragmentation and brokenness, but beneath the poems beats a longing for wholeness and connection. Twist’s generosity in truth-telling makes Disintegrate/Dissociate a dynamic addition to the growing library of Indigenous literature currently pushing the boundaries of Canadian writing. 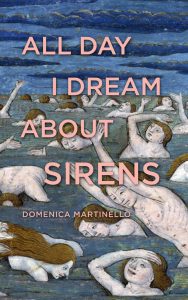 All Day I Dream About Sirens
by Domenica Martinello
Coach House Books, 102 pages

Domenica Martinello’s debut, All Day I Dream About Sirens, is also a meditation on self-construction, but this time through the extended metaphor of the mermaid, a mythic yet strangely real human-animal hybrid. ADIDAS couldn’t have come along at a better time; short months after the collection’s publication, Disney announced that Halle Bailey, a young, black actress-singer, had been cast as Ariel in the live-action remake of The Little Mermaid. The veiled-racist outcry was swift, with commentators and bots alike gnashing their digital teeth over the idea of a melanated mermaid, going so far as to construct pseudo-scientific explanations about how Ariel couldn’t possibly be Black because the sun’s rays don’t reach deep-sea depths (but offering no rationale for her Calypso singing crustacean sidekick apparently aquatic Blackness is acceptable for secondary characters, but not for ingenues).

Martinello’s poems make it clear that there’s no one way for a mermaid to be. From the split-tailed Melusine of Starbucks-logo fame to “seamistresses” sunning in the Bay of Naples to Disney’s Ariel herself (written here as “the American Dream’s / premium antiques collector”), Martinello’s mermaids aren’t family-friendly; they’re fierce. The sirens of classical myth, after all, are monstrous, cunning, deadly. In a prose-poem called “Thirteen Ways to Optimize Your Underwater Brand,” Martinello writes, “Splicing sea monsters with airtight maidenhood has created / a staple in questionable storytelling from Ithaca to Denmark. / What do sirens and Ariel have in common? Tits, tunes, ’n’ fins! … Here’s the aqueous, the spume, acquiescent, dangerous / female logo.”

There’s plenty of dry-land content in ADIDAS as well, including the moving “Unlettered,” an imagined address to the poet by the Italian-immigrant grandmother whose name she shares, and two poems, “New No More” and “Virginia’s Moth,” that expose—each in their own way—the inequities and imbalances of the literary status quo. If there’s a criticism to be made, it’s that there might be simply too much material in ADIDAS, with the more dazzling, snappy, cultural-reference-laden pieces drawing the reader’s attention away from some of the quieter, but still very strong poems. Then again, isn’t that exactly what sirens do?