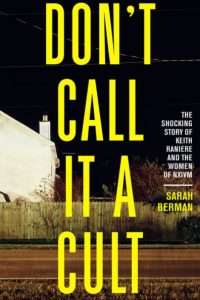 Don’t Call it a Cult: The Shocking Story of Keith Raniere and the Women of NXIVM
by Sarah Berman
Penguin, 336 pages

NXIVM exploded into public consciousness in 2017, when Canadian actress and ex-member Sarah Edmondson revealed she’d been coerced, via kompromat, into having the initials of the organization’s volleyball and Ayn Rand-loving leader, Keith Raniere, branded onto her body. Though the brandings, as well as the group’s master-slave dynamic, were ostensibly dreamed up by a women’s group within the organization called DOS, aka “Dominus Obsequious Sororium”—an ersatz Latin phrase that clunkily translates to “master over the slave women”—they were later revealed (surprise!) to have been Raniere’s brain-child, though “brain,” in context, sits uneasily.

Fakery was key to NXIVM, which Raniere (rhymes, appropriately, with racketeer) conceived as an “executive success” program. Based on self-helpy, Scientology-like principles, members were pressured to sign up for endless high-priced classes—whose completion was rewarded with ill-fitting coloured neck “sashes”—in which they were encouraged to reveal their problems, and then assume blame for them. Raniere promoted himself as “Vanguard,” the smartest man in the world, a self-awarded distinction based on his score in an obscure intelligence test later discredited by the Australian Guinness Book of World Records. Ubiquitous video demonstrating Raniere’s rhetorical style—gnomic, faux-deep utterances followed by long, meaningful pauses and beady-eyed stares—suggests less a genius than that guy in your graduate philosophy seminar.

Raniere is easy to mock, though journalist Sarah Berman, whose new book is based on the interviews and research she conducted while covering NXIVM, and Raniere’s trial, for Vice, mostly refrains from doing so. Her writing is clear and business-like, with occasional lapses into colour commentary, as when she describes 1990s Raniere as “goofy and sleepy-eyed, like a sticky-fingered kid after eating too many popsicles.”

NXIVM’s Canadian connections run deep. The organization’s Vancouver chapter was by far its most successful, and much of its funding came via the daughters of late Seagram founder and billionaire Edgar Bronfman, Sara and Clare, for whom Raniere was “their therapist, their spiritual teacher, their second dad, their abusive lover.” That relationship, and the sisters’ bottomless pockets, were, per Berman, largely why Raniere was able to sustain his abuses for so long.

NXIVM has already been the subject of two major TV series and a hit CBC podcast, so it’s reasonable to ask if we needed a book, too. But having consumed all of it, I can definitively say the answer is Yes. And not just because Berman rounds out the picture by focusing on new stories, but because, as with every familiar tale, the pleasure’s in the journey: in this case, to the prison where that that smug creep and his bevy of misguided henchwomen eventually ended up.

Oh, and it’s a cult. Obviously.