By Emily Donaldson on November 10, 2022 Reviews 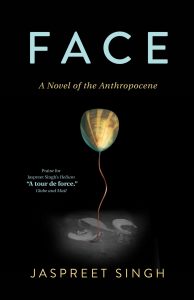 Face: A Novel of the Anthropocene
by Jaspreet Singh
Brindle & Glass, 248 pages

Narrators completely assured of their moral compass and high intelligence, whatever their gender or background, are insufferable. Jaspreet Singh presents such a figure in Lila, a science journalist who works “for a provincial magazine” in Calgary and who has “won eight National Magazine Awards and the Science Writing Award. The Science Writing Award is more prestigious: a distinguished jury handed it to me at a ceremony in Ottawa for a series of articles on ancient DNA studies and migrations.” The stiffness of that puffery undermines the claim of her journalistic prowess. “In this new epoch most stories rhyme with crime. Or with witnesses (i.e., ghosts or ghosts-to-be in layers of rocks).” The first sentence’s clumsy attempt at an aphorism is followed by an even clumsier second sentence. Style and tone are equally neglected, either by Lila or Singh, throughout Face.

Perhaps as readers we’d get further by asking about those ghosts. A few pages in, Lila says that she meets a soon-to-be friend, Lucia, in a creative writing class. “They did not even know each other’s names; so far neither one of them was aware that within the next fifty-one days one of them was going to die.” The death Lila speaks of is hers. I say this because those unfortunate enough to spend time with her pomposity will ask, “When does Lila get offed?”

What draws Lila to Lucia? Reasons are provided but fail to convince. What’s certain is that Singh needs them to become friends, else how could Lila die after she confirms that Lucia’s husband, Amitabh, is a former schoolmate who killed himself, or so everyone thought, in India decades ago? Face uses the banal device of yo-yo-ing between past and present events: the past story of Lila, her female friend Gauri, and Vikram (who becomes Amitabh), all fellow students until Gauri is killed, somewhat suspiciously, perhaps by Vikram, and the present story of a new threesome where Lila takes Gauri’s place. None of this adds anything worthwhile because Lucia, Gauri, and Vikram/Amitabh are only ever seen through Lila’s presentation.

What does a novelist do with a humourless narcissist who sees only her own needs and genius (apart from winning awards, she’s a micro-expression expert) and who is unconscious of her unpalatable behaviour (behaviour frequently found in male characters)? Singh doesn’t try to dampen Lila’s egoism. On more than one occasion that trait collides with confused thinking:

The guard…kept her eyes fixed on the teenager who was going around and around the hall without looking at the paintings…I was obviously engaged in something odd, something no one else in the hall was doing, and to reassure the guard I took out a pen and a little journal and wrote a word down every now and then.

From textual evidence, Lila is somewhere in her forties. Yet this expert journalist either haphazardly introduces a previously unseen figure or has no conception of what she looks like. Regardless of whatever is trying to be communicated, what is clear is Lila’s bloated sense of self-importance. Consequently, she is almost constantly aggrieved. She criticizes the creative writing instructor who doesn’t reply to her email fast enough over a holiday weekend, the bookshop employee who has made the mistake of filling his house with crime books, and even a seemingly straightforward sentiment about the weather (“The street was bright, a bit gusty for my liking but bright”) sounds like a beef. Though she doesn’t like to be kept waiting, Lila stalks Lucia for seventy minutes instead of meeting with her at a set time. After her death, Lila complains about her photo being pinned by Lucia on a wall next to Emily Murphy, “a constant supporter of eugenics.” There’s no rest from judging in the afterlife.

But what a life she had! Lila thinks her existence so important that, to fulfill the creative writing course obligation to write a novella, Lucia should write about her: “and with that word she will save my story (not a big demand; much less than what I demanded of myself), and the first thing she has to do to save my story is to make corrections to the one floating around. Only then will I depart.” What a piece of work is Lila, controlling and threatening in life and death. If Face is what the novel of the Anthropocene might look like, then a terrible epoch looks to be much worse than imagined.