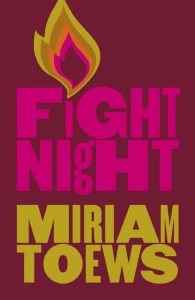 Inevitably, the implicit subtitle that comes to mind for Miriam Toews’ new novel, Fight Night, is Girl Talking. Fight Night isn’t literally a sequel to Women Talking, but it reads like both a spin-off and an escape from its predecessor’s taut unspooling of ethically weighty dialogue. Where Women Talking was grim, intense, and rigorously avoided using its characters’ trauma as a source of inspiration or uplift, Fight Night is exuberant, hilarious, and carries a heart-warming message about resilience and love triumphing over tragedy. Both novels rely on the force of individual voices to move their narratives forward, but while Women Talking filtered its women’s words through the uneasy proxy of its male narrator’s transcription, the delights of Fight Night (and they are many) result from the total absence of filters, not just between us and its nine-year-old narrator, Swiv, but between Swiv and the women who talk most to her: her mother and grandmother.

Fight Night is written as a letter to Swiv’s absent father. Swiv has been suspended from school for fighting, so Grandma is in charge of homeschooling activities while Mom, an actress, attends rehearsals. (Their unconventional curriculum includes classes like “How to Dig a Winter Grave.”) The caretaking is reciprocal: Swiv picks up Grandma’s prescriptions, pulls up her compression stockings, and accompanies her on urgent diuretic-induced quests for bathrooms when they go out. Mom too leans on Swiv as she endures the physical and hormonal upheavals of a “geriatric pregnancy” (“which doesn’t mean,” Swiv helpfully clarifies, “she’s going to push an old geezer out of her vag”).

The happily unconventional life of their present is a hard-won refuge from their painful past. The backstory takes us into familiar Toews territory: a “town of escaped Russians” dominated by a dictatorial patriarch, in this case “Willit Braun Senior…pompous, authoritarian, insecure, frustrated, self-pitying, resentful, envious, vain and vindictive.” Mom and Grandma still struggle with a legacy of suffering, oppression, and loss, both literal and spiritual. “They took our life force,” Grandma tells Swiv, “and so we fight to reclaim it…we fight and we fight and we fight.”

The necessity of fighting—“to love ourselves…for access to our feelings… for access to God”—is the crucial lesson Mom and Grandma pass on to the next generation. “You’re a small thing,” Mom writes to her unborn child, “and you must learn to fight.” Swiv is too young, and (relatedly) her knowledge of her family history is too partial and fragmentary for her to grasp the full meaning of this oft-repeated imperative. Like the screaming of women in labour that Swiv overhears as Grandma watches episodes of Call the Midwife, its reiteration is background noise generated by women’s suffering, a context that will mean more to her as she ages.

This gap between what Swiv reports and what she understands is one by-product of Toews’ choice of narrator. Swiv isn’t unreliable; she’s just nine. Her voice is an exhilarating combination of innocence and precocity, its effects equal parts comic and poignant. But Swiv’s youth puts additional pressure on the strained premise of all epistolary fiction: that someone could chronicle their life “to the moment” (in Samuel Richardson’s phrase) with copious fidelity—and still have time to actually live it. Expecting strict realism in this genre misses the point, but in Fight Night’s first fifty pages alone I noted dozens of words it seemed unlikely that even a child as smart as Swiv would use or (if quoting someone else) know how to spell, making the artifice uncomfortably apparent.

More important, the insights of the novel as a whole are constrained by Swiv’s point of view. The retrospective narrators of novels such as Great Expectations and Jane Eyre layer their recollections of childhood with their adult reflections. Fight Night, in contrast, for all its grownup elements, offers a child’s version of them. Perhaps this is why its underlying ideas ultimately seem simplistic, even clichéd. Swiv is a delight, but she isn’t (how could she be?) a deep thinker, and neither, really, are Mom or Grandma, her primary sources. Women Talking is a genuinely philosophical novel, a complex ethical debate with no comforting resolution. Fight Night, in contrast, is a warm hug of reassurance: life is a struggle, but it will all be okay in the end. “We need tragedy,” Grandma tells Swiv, but we also need “to find joy and to create joy.” That’s what she has fought for, and it’s what Fight Night provides.