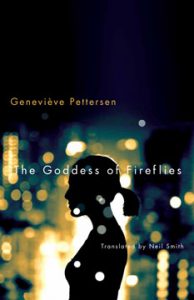 The Goddess of Fireflies and Under the Stone, published by Esplanade Books and Anvil Press, respectively, are part of a wave of Quebec fiction being translated into English by small presses (others include QC Fiction, Biblioasis, Talonbooks, Arsenal Pulp Press, Coach House, and BookThug).Geneviève Pettersen’s book, widely praised as the Quebec coming-of-age novel for the generation that came of age in the nineties, shares some features with an older era of Quebec fiction: nostalgia for a time that was difficult yet emotionally formative; criticism for a grim social situation that is nevertheless overlaid with a rose-tinted wash. In this, it has something in common with Eric Dupont’s English-translated works Sugar Thieves and Life in the Court of Matane. Both Dupont and Pettersen combine some of the older traditions of Quebec literature with an urban sensibility and the influence of Anglophone literature more generally. The dystopia of Under the Stone (its original title is Sous Béton or “under concrete”) calls to mind writers such as J.G. Ballard and George Orwell. Artistically and philosophically, it shows many influences, including those of Jeremy Bentham and Hieronymus Bosch.

Catherine, the narrator of The Goddess of Fireflies, is celebrating her fourteenth birthday as the novel opens. Until this point, she’s been happy hanging out at the mall for entertainment. There’s not much else to do in the small town of Saguenay. But she soon leaves her tame friends behind and falls in with a crowd whose leisure activities centre around snorting a variant of PCP called mesc. Everything quickly becomes secondary to scoring. Her newly divorced and perennially incompetent parents keep threatening Catherine with rehab, but she dismisses their concerns.

Catherine, who continues to do well at school and has a lawyer for a father, initially seems out of place in the seedy local drug scene. Early on, after she’s tricked into snorting crushed Tic Tacs by the fireflies – as she refers to the town’s cool girls – Catherine is definitely not one of them. But Catherine is used to being good at whatever she does, and she quickly works out how to fit in. When she starts going out with Pascal, ex-boyfriend of the queen of the fireflies, Mélanie, Catherine rises in the hierarchy. Later, when she dumps Pascal in favour of Kevin, one of the group’s most popular boys, her transformation into the goddess of the fireflies is complete.

It’s at this point that someone very close to Catherine dies. As she navigates the tragedy — she attends the viewing high — it’s impossible not to wonder what will happen to her. Catherine thinks she’s having fun with the drugs, the partying, and the sex, but the reader watches in dismay as what started off as a fun experiment shows potential to harden into a new unpleasant reality around her.

The regional slang used liberally by Pettersen in the original book is replaced, in Smith’s fluid translation, with a more generic teenage voice. Things are of necessity lost; in this case it’s the feel of the idiom — but Smith’s decision to use more general slang is vastly preferable to any attempt to transpose — impose — another kind of vernacular onto the novel. 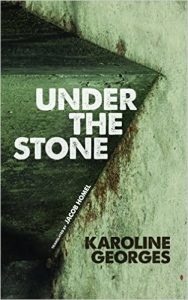 Catherine’s coming-of-age is in some ways universal: the aimlessness, the boredom, the effort of figuring out who you are will be familiar to anyone who’s ever been stuck in the painful limbo of adolescence. The childhood depicted in Under the Stone could hardly be more different from this. The narrator here is a nameless child: “‘If, one day, the child wants a name, he will choose it himself later,’ the mother had suggested at birth.” We quickly see that the lack of name indicates disposability: first the child’s two sisters are murdered, then his two little brothers wrapped in plastic and killed. The mother and father are unable to cope, it seems, with their large family. When the sanitary agent visits to send the dead bodies down the garbage chute, it’s clear that they are not the first he is disposing of that day.

The child lives on floor 5,969 of the Tower, surrounded by concrete on all sides. The Tower is, for all intents and purposes, the entire world, a closed ecosystem from which people are banished three times a day for crimes like disease, infection, and non-conformity. Each family unit is trapped in its own cell, where its members are trained for one of the jobs that keeps the system going. It aims, like the tower in Ballard’s High-Rise, to meet all of its residents’ physical needs, but their psychological ones are irrelevant at best. Here, the nuclear family — an integral structure of the social organization — is good for little more than providing new fodder for the machine, and are damaging for their own members.

The child has always been taught that the world outside the Tower is a chaotic mess of violence and anarchy, but he learns, after his own banishment, that this is not necessarily the case. We know from early on that this disappearance will happen; its unrevealed particulars create some of the novel’s threatening tension. Despite its troubling nature, the scene turns out to be not so much the novel’s focal point as a turning point. Afterward, the novel shifts to the perspective of the child, who has now left his body and become part of the tower’s concrete walls (which are themselves almost a character) of the Tower. In keeping with Georges’ interest in themes of sublimation, the novel now moves to something nearer to speculative fiction. The writing changes too, becoming daring and experimental, more sparse on the page, resembling a hybrid of poetry and play.

Some dystopian novels, particularly YA novels like The Hunger Games, work via recognizable, relatable characters. Although the tone of Sous Béton is neutral, almost sterile, it’s still a compelling and intriguing piece of writing. The perspective shift is perhaps too abrupt; the second section isn’t quite long enough to convince the reader of the new reality it depicts. But the jamming of these two disparate genres into one novel, and the manner in which Georges accomplishes it, is clever enough to make the book worth reading.

Isabelle Daunais, a professor at McGill, recently won a Killam Prize for her book Le roman sans aventure, a survey of Quebec literature. Daunais contends that, until the eighties, Quebec literature wasn’t in synch with Western literature, which has mostly been about some kind of adventure, or transformation. Quebec’s literature, in contrast, has been characterized by a state of idyll — or more precisely, unchanging peace. The two books considered here are far from peaceful. Both are brutal in their own way, one raw and rough, the other cold and clinical, but both show Quebec writers joining literature’s larger conversation while still showing the influence of their literary history.