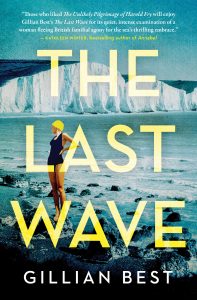 The Last Wave
by Gillian Best
House of Anansi
304 pages

“Why am I here?” John Roberts asks Martha, his wife of over fifty years, as they stand on the rocky shore below Dover’s famous white cliffs near the end of Gillian Best’s smart and touching novel The Last Wave. “To see,” Martha answers. John doesn’t know it, and given his advancing dementia might not reliably understand or remember it if he did, but Martha has just learned that the cancer she fought off once already might be back. Martha’s response to this news is to go where she has always gone to be most herself: to the water. This time, knowing it might be the last, she strips down and swims out a ways, then turns to look back at her husband, “coming undone while picking at the fresh pink blossoms on the myrtle in the sunshine.” As the waves wash over her, so too do the memories of her two most important relationships: with John, and with the sea.

The Last Wave tells both of these intertwined stories about Martha, which are also deeper stories about women, identity, and ambition. Since she first fell off the Dover pier at ten years old, Martha has felt more in her element in water than on land. Growing up in post-war England, she is an “unfeminine disappointment” to her mother, awkward and uncomfortable in dresses “adorned with unnecessary ruffles and frills.” In the water, though, as Martha’s own daughter Harriet later observes, “she had grace and strength.” Even on the day she fell into the harbour, before she knew how to swim, Martha wasn’t afraid: “instead of feeling trapped by the sea I felt supported by it.”

Swimming becomes Martha’s release from the stresses and disappointments of her daily life. “Gliding through the water almost completely submerged had always been a retreat to a different world for me,” she explains:

No other solitude… allowed my mind to wander so freely, roaming the wilds of my fantasies and the hundreds of other lives I imagined for myself. It was something I could only ever do when properly wet.

Even as it strengthens her physical body, though, swimming perpetuates the opposition between Martha and conventional standards of femininity. Her marriage to John initially resolves this tension—though not by reconciling land and sea. “Come out of the water,” John says on the night he proposes, and Martha does: “I came out of the water for him that day and I stayed on dry land for nearly ten years.”

After a decade of marriage, however, Martha suddenly “felt the waves calling me back, beckoning me into the frigid depths.” She returns, dripping, from an impromptu swim, and announces to John that she is going to tackle the English Channel. From John’s perspective, her timing is terrible—she was supposed to be home preparing dinner for his boss—and her plan is preposterous. “Life isn’t about doing what you want,” he expostulates; “it’s about doing what needs to be done.” “My life depends on it,” Martha replies, and though his first reaction is a brutal rebuff, John comes to understand and support her ambition. He helps raise the funds for her first attempt and, in a pattern that is as significant metaphorically as it is literally, follows every one of her crossings (she eventually makes nine successful ones) in the pilot boat that keeps her safe and on course.

Best effectively conveys the gruelling physical realities of Martha’s swims, from the chill of the water itself to the cruel chafing of her suit straps and the painful stings of jellyfish. The Last Wave is about more than swimming, however: Martha’s real goal is not France but self-knowledge. When Harriet asks Martha, after her first attempt fails, why she did it, her answer is simple: “To see.” “I hope,” she tells her uncomprehending daughter, “one day you know what it feels like to be completely and utterly compelled to see about something.” Martha wants to see who she herself really is, besides “a wife and a mother.” When Harriet is grown up and divided from her parents by her own confrontation with John’s narrowmindedness, Martha recognizes that, for Harriet, something else had the same compulsive importance. “Iris is who you went to see, isn’t she?” she asks her daughter; “So you know, don’t you?”

John precipitates the worst crises of The Last Wave, but Best tells a story of struggle and resistance with neither heroes nor villains—in which genuine errors, even ones that can’t be easily excused or forgiven, coexist with genuine virtues. The novel is eloquent about the grandeur and power of the sea: “the waves that lap at your toes when you stand at the water’s edge,” Martha tells John, “have come a very long way and they’ve seen more than you or I ever will.” The greatest strength of The Last Wave, however, is its clear-eyed tenderness about marriage, families, and friendships, which for all their compromises and failures, are what keep us afloat. “I always swam home to you, didn’t I?” says Martha to John. When Martha’s gone, her granddaughter Myrtle—named for the seaside flower that stands throughout The Last Wave as a symbol of continuity and resilience—takes her grandfather’s hand and promises to “tell her you came to see”—“to see her in the sea.”