By Emily Donaldson on September 2, 2022 Reviews 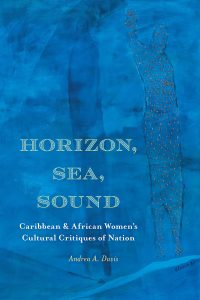 In Horizon, Sea, Sound: Caribbean and African Women’s Cultural Critiques of a Nation, York University professor Andrea A Davis invites us to consider the works of a dozen Black women artists, among them, playwright Djanet Sears, poet M. NourbeSe Philip, and singer-songwriter Amai Kuda. These artists face the trauma of the past, while insisting upon Black women’s survival and powerful advocacy. In sharing their creative re-imagining of the tropes of the horizon, sea and sound, Davis offers new visions for Canada rooted in Black women’s belonging in and beyond the nation.

Davis argues that the cliché of the horizon as a hopeful metaphor for the future must be revisited. For Black women, horizons symbolize frustration rather than hope, as injustices persist and better futures are deferred or denied. In Sears’ Governor General Award-winning play Harlem Duet, for instance, the two main characters act out a drama in three time periods, over more than a century and a half. But there is no progress. The male character, Othello, strives for upward mobility in a world “beyond this race shit bull shit.” Each time, he fails to transcend an individualistic, capitalist, and patriarchal culture where Whiteness sets the standards for what is universally desirable. The female character, Billie, seeks to deepen her connections to family and community, but this only leads to extreme alienation, a kind of psychological disintegration in a racist society determined to sunder those relationships. Othello forsakes Billie to live with a white woman. Black nationalist leaders offer a political alternative to Othello’s assimilationism but reproduce his patriarchal disregard for women. As Davis observes, persistent white supremacy, patriarchy, and misogynoir ensure that, “Black women invariably lose.” Liberation and love for Black women remain in the future, unrealized, still on the horizon.

If the horizon represents frustration rather than hope, Davis describes the sea in equally bleak terms, as an “archive of bones, human blood, death, loss, memory.” In Canadian poetry, the vision of the sea as a graveyard for the Atlantic slave trade is conjured most famously in Philip’s celebrated poetry cycle, Zong!, named after an eighteenth-century Dutch slaving ship. Davis revisits the poem, asking what it can teach about the pain of the past and how the past can be taken up in ways that do not cause further trauma, but healing. In her poem, Philip commemorates the murder of more than a hundred enslaved Africans who were thrown overboard and drowned in 1781. But Philip refuses logics of slavery that, in a two-page insurance claim, recorded the drowned women, men and children as nothing more than “lost property.” She re-purposes historical legal documents about the lost “cargo,” re-arranging and augmenting the text to evoke both the rich experiences of life in Africa and the terrors of the ship’s voyage. In the poem, elongated spaces or gaps visually reproduce difficulties of speech that, Davis suggests, “resul[t]from asphyxiation caused by drowning.” In so doing, Philip viscerally reminds us of the horror of their murders. But Philip moves beyond the horror by mourning for African life through this act of poetic remembrance. In wave after wave, the sea brings back past trauma. By reclaiming the sea and its dead, Philip prefigures new Black feminist possibilities of caring for Black life.

This caring supports the emergence of Black women’s agency at its most politically vibrant. Black women’s voices rise in song to create, in sound, what Davis calls “the future now.” Like Sears and Philip, singer-song-writer Amai Kuda—Philip’s daughter—is unflinching in remembering past trauma. A video with the subtitle “Dirty Money” begins with images of some of the millions of Congolese people who were killed, mutilated and starved on rubber plantations during the reign of King Leopold II of Belgium. But the “political and sonic power” of Kuda’s voice transcends this murderous violence, whether historical or contemporary. She sings out for freedom for Black women, drawing strength from feminist solidarities with African and Indigenous women around the world. As Davis puts it, “Her voice echoes into the future…chant[ing]a persistent and rebellious belief that a future for Black women is possible.”

Davis ranges far beyond the stylized arguments presented here, inviting us to engage with a variety of African and Caribbean women artists from Canada who call upon us to recognize the trauma of gendered racial violence. But this is not an endpoint, the final horizon. Instead, Davis’ conviction that Black women’s pain matters, because Black women’s lives matter, is an invitation to readers to engage more deeply with Black women’s voices. When we listen, we hear pain and anger at injustice. But we also hear the sounding out of joyful futures by and for Black women who are not only imagining tomorrow but asserting their vibrant, creative powers in the arts today.