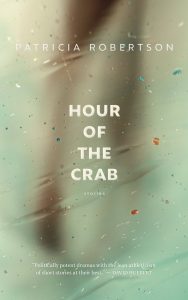 Literature that self-consciously explores language is nothing new, but Patricia Robertson manages to articulate her own electrifying turns of phrase in her speculative short-story collection Hour of the Crab. Plaintive ghosts, vengeful gods, and prophetic dreams haunt the book’s pages, and viscerally uncanny words and symbols often accompany these unearthly phenomena. After all, as Robertson quotes in the epigraph, there should be “no more tame language about wild things.”

Throughout, Robertson’s approach is not that of the language poets, who distort language in an attempt for us to see it anew. Instead, her clear, distinct, and detailed prose follows other works of science fiction and fantasy—Neal Stephenson’s Snow Crash among them—that turn words into performative language, giving them a spell-like quality as well as a physical weight. In “Speaking in Tongues,” for example, an old woman named Babs begins to see strange messages imprinted on her body and to perceive mythical codes in beach shells. In “The Calligrapher’s Daughter,” the titular daughter’s meticulous, holy writing produces a language with a (un)godly mind of its own, while in “The Old Speech,” one of the only speakers of a dying language begins carving his words into stone, recreating them as sculptures.

This power of language and symbols, however, is not without its pitfalls. After all, if language is a spell, it can also be arcane and indecipherable, or else unruly and prone to miscommunication. A great many of Robertson’s characters have no idea how to interpret the symbols they are receiving and often seek out the help of translators, with varying degrees of success. When the main character of “Hour of the Crab,” Kate, finds the body of a migrant washed up on a beach, she sees a symbolic tattoo etched into his skin. In response, she embarks on an odyssey with a series of interpreters to identify the boy, find his family, and notify them. She fails. Similarly, when the calligrapher’s daughter gives an illustrated Qu’ran to the sultan, he asks her with alarm why the letters contain a fiery inner light. She, however, has not seen such a light and knows as little as the ruler about what it might mean.

Hour of the Crab’s experiential chasms and failures to communicate aren’t always mystical, either. During her travels to find the migrant boy’s family, Kate gets subtly tetchy that someone doesn’t fully appreciate her act of charity in reporting his body, and it feels acutely mundane and human that she’s missing the point. In “Fire Breathing,” the likeable Ty keeps forgetting his Indian wife Parveen’s traditions, and the meanings of her family’s rituals and symbols keep innocently slipping his mind and hollowing out.

For Robertson, these failures to communicate or understand aren’t always—or even usually—flaws. Or rather, these flaws aren’t exactly the point. After all, we can understand that something has power without understanding everything about it. In “Speaking in Tongues,” Babs believes the symbols imprinted on her skin and the shells she finds are coded messages from powerful new gods, albeit ones she cannot respond to or understand, as she is only a mindless receiver. Nonetheless, at the close of the story she has come to believe that her grandson’s generation will finally unlock the code and travel to meet these gods and she imagines the children as “they looked back at her from wherever they were, their faces radiant, but they couldn’t tell her where it was.”

If, as Ludwig Wittgenstein once advised, “Whereof one cannot speak, thereof one must be silent,” Robertson might return that there actually is a word for that, we just might not recognize it. In Hour of the Crab, words don’t merely encapsulate concepts—at their best, they reach beyond their grasp. To take a final example, the calligrapher’s daughter may have no idea why what she writes on her parchments shimmers from within when the sultan looks at it, but that doesn’t stop her from producing the effect. Her spell works without mastery, though per-haps not without belief. Isn’t language like this? It’s a perspective that makes Hour of the Crab uncanny, unsettling, and well worth the read.