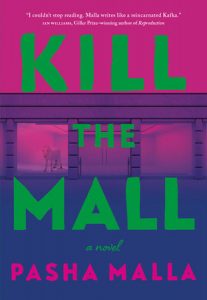 Kill the mall? But why, when in the wake of what’s been dubbed the retail apocalypse, the mall is already dead? And it died long before the COVID-19 pandemic struck.

The mall is no longer the vital cultural touchstone it (barely) was in the days of films like Mallrats (1995). Today it’s less a place to shop and more a destination where the elderly can get a bit of exercise during the winter months, safely away from icy sidewalks. Even in the eyes of Kill the Mall’s narrator, it is a haunted pile of “overwhelming desolation.”

The narrator didn’t start out feeling this way. He gains a residency at the mall after his romantic declaration of love for the place. What this residency consists of is something even he doesn’t understand. Basically he’s a kind of writer-in-residence, drawing up “progress reports” that are really just vague essays on whatever he happens to be thinking about at the time. There’s no evidence they’re being read. In the meantime he lives at the mall, in a storefront converted to a living space. He takes his meals at the food court. He walks about and looks at the mostly abandoned shops.

He doesn’t meet many people, which underlines the paradox the novel presents us with. The narrator is a lonely man and the mall is a lonely place. With no friends, no skills, and not much of a life to speak of, he feels isolated, looked-down-upon, and unhappy. As a writer—at least that seems to be his job description—he is a cultural relic who rightly belongs in such a ghost town.

The best entry point to Kill the Mall is its genre. This is dark fantasy, or what’s often called Weird Fiction. An elevator takes the narrator to strange, other-dimensional levels of the mall, one of which has a pool full of ghosts and another a pony. One of the few people he gets to know drowns in the pool, but is survived by his ponytail, which goes on to become the mall’s star artist. Not a little professional jealousy ensues.

You might assume that Weird Fiction is meant as allegory, but it resists being read or interpreted in any specific way, its meanings shooting off in myriad unresolved directions. Malla’s mall, for example, is variously likened to a body, a cosmos, and a prison, just as the narrator represents the plight of the artist in the twenty-first century, alienation, and the human yearning to be free from a coercive, surveillance-capitalist state. Hair, in the form of a rising tide of animate ponytails, is a major motif, but if you were to try to read it as a symbol I don’t know what you’d come up with. I was reluctant to try.

What we’re left with is more the evocation of a certain atmosphere than the dramatic interplay of characters. In fact, one could read Malla’s book as a fantasy entirely taking place in the narrator’s head, as the people (and pony) he meets have little to say and only perform whimsical plot functions. The whole thing is a dream, with the world of the mall being the kingdom of sleep, our “ultimate solitude”: “Is there anything so lonely as it is to fall asleep?” The ending then simply rep-resents the narrator waking up, like Charlie breaking free from a nightmare in the Charlie and the Great Glass Elevator. But that’s just another possible reading among many.

What then of the narrator? He’s no good at his job and compensates (or takes refuge) with self-deprecating abasement or a high-flown but awkward rhetoric full of stilted diction (the sunflowers in one store are described as having “hydrocephalic, jaundiced heads lolling atop gangrenous necks”). He is a pathetic, clownish figure whose every attempt at heroism ends in bathos. A pull quote on the cover from Ian Williams describes Malla as writing “like a reincarnated Kafka,” and when considering the narrator one can see that connection. From Castle to Mall is one short step for an untermensch in the realm of the absurd.

The narrator is an outsider, at odds with his chosen environment, quarantined from it in his cell at night and unable to communicate fully with any of the faceless mall-walkers who circulate about him during the day. If Kill the Mall—surely the title is meant to be said all at once for its full nihilistic flavour—is a hard book to interpret, that’s also a reflection of the narrator’s isolation. “How was one to know, ever, what another person really meant?” he complains, just before entering into an elaborate attempt to decode the word “okay.” Then later he will be outfaced by the silent grin of the drowned friend with the ponytail:

…all he did was stare, that weird smile blazing like a signal fire. But signalling what? Or whom? It communicated nothing. It didn’t speak to me. The smile was as mute and inexpressive as the man him-self. It struck me as a mask pasted over some private torment.

That private torment, in the broader context of the novel, is that of the narrator’s loneliness and low self-esteem, his impotence magnified as he’s plunked down in a world full of shops where he has nothing to sell and there’s little he wants to buy. Dreaming of revenge on the fickle masses and their false prophets, he can only pray for rescue and deliverance. A disturbing and timely imagination then of the fate of a hunger artist in our time.