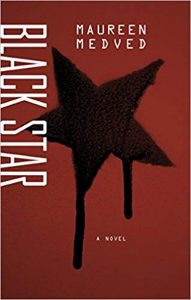 On or about April 2017, the women of Canadian fiction started to go insane. At least that was when we first heard of the sad case of Professor Edith Vane. Dr. Vane, “a woman in her forties with deadlines,” plunged down a rabbit hole of madness and paranoia as the pressures of work and a disintegrating personal life caught up with her, leading her to imagine portals into other realities and hallucinate a suicidal doppelganger. Her therapist, who may as well have been an automated voice on a dial-a-shrink program, was of no help at all, and the last anyone heard of the professor she was trapped in an academic version of the falling House of Usher and turning into a hare.

Then, in May, Rose Bowan, owner of a Toronto rep cinema, jumped into the body of a woman named Harriet. Was Rose entering a parallel universe, or was she only suffering a mid-life crisis? One could argue either side. In Rose’s alternate reality, for example, her long-dead sister Ava (Harriet) had grown up and was pregnant. This clearly signalled that at least some wish fulfillment was going on, as Rose blamed herself for Ava’s death and couldn’t have children of her own.

Just a few months later, and still in Toronto, a bookstore owner named Jean Mason imagined meeting her double. Here the evidence clearly pointed to hallucination, as Jean suffered from a brain disorder known as asymmetric autoscopy. But could that diagnosis of delusional tendencies provide a defence for murder? The jury is still out on that one.

Finally, at the beginning of 2018, Catherine Bach, Vancouver tech entrepreneur, conjured up a threatening doppelganger named Kate, who seemed intent on destroying Catherine’s business start-up. The usual questions arose from this. Was Kate just a projection of Catherine’s own anxieties and self-destructive tendencies? Or was Catherine the victim of some supernatural Gaelic curse?

You may have recognized some of these names. They are taken, respectively, from Dr. Edith Vane and the Hares of Crawley Hall by Suzette Mayr, Little Sister by Barbara Gowdy, Bellevue Square by Michael Redhill, and The Rule of Stephens by Timothy Taylor (I’ve ordered them by publication date). We may take note of a number of common elements: protagonists who are professional women just entering middle age and finding themselves under pressure at home and at work; the onset of dissociative states; the appearance of doubles that represent, among other things, both hopefulness and the stirrings of doubt concerning important choices the protagonists have made; the ill health of a close family member or friend (meant to signify, I think, an awareness of responsibilities greater than the self, or a test of empathy, or a “there but for the grace of God” reminder); and finally a confusing climax involving different levels of parapsychological and metafictional obscurity.

Black Star, by Maureen Medved, is very much a book in this same vein, and one of the better entries in the crack-up genre. The narrator is Del Hanks, a forty-two-year-old philosophy professor. I begin by mentioning her age because it signals that, for Del, it’s mid-life crisis time: “Everything under forty is the end of the beginning. Everything over forty is the beginning of the end.” Adding to the weight of Del’s years is the fact that a friend and colleague is dying of cancer and Del is trying to get the manuscript of a book she’s writing finished just as she’s coming up for tenure review.

There’s not much point going over plot details. With their protagonists losing all but the most tenuous grip on reality, these crack-up novels enjoy undercutting any solid ground for understanding what’s actually going on. Whatever its origins (she floats hormones as a possibility at one point), Del’s mental state makes her a clinically unreliable narrator. When she expresses an awareness of this, however, it’s of little help, as she can only insist upon evidence for her sanity that the reader is in no position to judge as objective.

This unreliability, in turn, is deepened by the idiosyncratic and jagged quality of Medved’s writing. What makes Black Star different from most of these novels is, primarily, its impressionistic and sometimes difficult voice, which is full of non sequiturs and broken chains of thought. Del is a first-person narrator whose stream of consciousness blinks on the surface as though dotted by water bugs. One reads a paragraph like the following without being quite sure what she is getting at:

I wasn’t dying to meet with the students, to listen to their mundane narratives. Often relieved to find no signature on the sign-up sheet tacked to my office door. They came. With their cups of coffee and their tears. How do I tell them it would be all right when I myself didn’t have the answers? None of us understand the pressure required for the metamorphosis. Nature is violent. The system devours some, inalterably changes others.

Well, one thing I think we can register from this is that university isn’t as fun as it used to be, much less a safe space for students or for faculty—a conclusion that reports of rising levels of anxiety, depression, and suicide on campus offer some support for. And this is a point we should not gloss over: while Black Star can be very funny, there’s no mistaking its anger at the dysfunctional place universities have become. When Del talks about the pressure her students are under, and how Nature is a system of violence, she is also clearly thinking of her own struggles in the red-in-tooth-and-claw world of academic politics. To say she has a low opinion of her fellow professors is an understatement: “I examined my colleagues one by one. Nothing good grew here. Nothing but stink, pollinators, ass kissers, liars, and backstabbers. The thing we aspired to, that once excited us, had died within us.”

It’s worth pointing out, however, that although sexual exploitation is also part of this violent system, Black Star isn’t a #MeToo novel. Del is haunted by an unhappy experience she had with an academic advisor back in the day (a day not so long ago, when universities were happy hunting grounds for a predatory professoriate), but Medved has said that the book is “more fully about ethics and systemic leveraging for power and bullying.” We see a lot of this in today’s campus fiction, as we see a lot of it on campus, and while there are some great comic bits in both Medved and Mayr, we have to check our laughter at the amount of exploitation and corruption that now seem taken for granted in the halls of higher learning.

All of this gives the proceedings a hallucinatory, Fall-of-Rome feel, with Del’s breakdown and the shattering of realism’s conventions mirroring a state of institutional rot and looming collapse. The novel begins by introducing a note of disease and ends with death, and I can’t be alone in feeling a bit uneasy in the midst of all this bleakness. Have our universities become this poisonous an environment? Is turning forty so awful?

A lot of Canadian novels in the past decade have taken men facing mid-life crises for their subject matter. Nino Ricci’s Sleep features an academic having a breakdown, but the dominant tone in this and other, similar works is one of depression and the yearning for a do-over, a second chance. On the evidence surveyed here, it seems that women facing the same rite of passage are less interested in Gatsby’s dream. Their world is a more dangerous place, though the threats are primarily mental rather than physical. To some extent, the characters’ doppelgangers are meant to represent alternative selves existing behind doors left unopened in life, but they are more likely to appear as agents of destruction than hopeful possibilities. Meanwhile, exasperated and outraged at reality and realism, home and work, family and friends, our madwomen speed toward the train wreck in the mirror. That’s the signpost up ahead. Their next stop will be in the twilight zone.