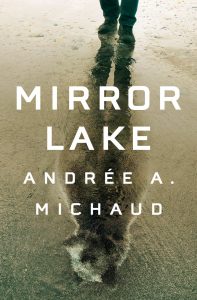 For those readers not in the know, Andrée Michaud is a Quebecoise author whose novels have been nominated for multiple French and English (in translation) literary awards. Her work is often shoehorned into the crime/mystery genre, but the plot conventions and character types familiar to readers are merely a skeleton for playfully experimental explorations of identity and other big-ticket issues.

Mirror Lake, originally published in 2006, is the latest of her novels to be translated into English. Our recently retired protagonist, Robert Moreau, is dyspeptically disillusioned with the world in general and his generation—he’s a Baby Boomer—in particular. To escape his malaise, he crosses the border into Maine, where he and his dog Jeff settle down in a cabin in the mountains on blissfully still Mirror Lake.

Moreau’s idyll is soon interrupted by Bob Winslow, a neighbour in search of company who won’t take no for an answer. Moreau’s brusque manner and cold shoulder aren’t enough to deter Winslow, and he’s too passive to give voice to his manic internal rants. Shortly afterwards, a body washes up on the shores of Mirror Lake.

Things get even more complicated when Moreau gets involved with Jeanne Picard, a local prostitute who is dating the brutish sheriff investigating the drowning and is possibly being abused/pimped by Jacques, a distant relative. In another bizarre twist, reminiscent of David Lynch’s Lost Highway, Moreau suffers a head injury and awakens in the hospital months later seemingly occupying his annoying neighbour’s body.

Unfortunately, the plot is far more intriguing in précis than in execution, though it’s hard to know what is to blame: the source material, the translation, or some combination of the two. The novel opens with an extended out-pouring of philosophical ruminations that float high above the page in a verbose ether because we know nothing about the protagonist or his dilemma. Then we spend dozens of pages listening to Moreau complain about Winslow, who doesn’t actually sound like a bad guy (we rarely get to hear him talking, as most of his dialogue is dismissively paraphrased).

When the plot finally revs up, the revelations and twists and turns are entombed beneath Moreau’s narcissistic personality, which require him to pontificate on his fellow characters’ every word and gesture.
Part of the problem is likely a matter of translation. Here is a passage chosen largely at random, when Moreau is meeting his lover’s abusive kin: “During this time, Picard was waiting, the fact of which prompted me to observe my own position in the light of our frequent propensity to assume that murderers are impatient. Actually, as far as murderers go, Picard seemed quite high up the pecking order of values regulating social relations, so I invited him to come in…”

Michaud and translator J C Sutcliffe are obviously aiming for an absurdist, ironic tone here to underscore the dangerousness of the situation, but the passage doesn’t sound like any recognizable English dialect or vernacular. At least in translation, too much of the novel is conveyed in this laboured writerese, with complex sentences straining under multiple passive verb constructions and often quite witty asides and insights obscured by the sludge. The persistently ironic tone also undermines the existential horror at the heart of Moreau’s predicament.

Crime fiction fans will want to give Mirror Lake a pass, but there’s enough play and humour here to satisfy patient readers.