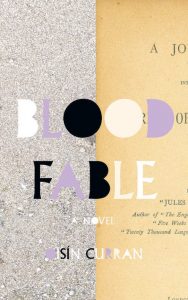 While burying his cat, Shadow, the protagonist of Blood Fable, an unnamed, precocious boy of eleven, mysteriously claims to remember the circumstances of his own birth. Suddenly overcome by the “strange interior tug” of a gravity seemingly non-terrestrial in origin, he faints, then bursts into an automatist babble peppered with fugitive figures, lonely hallways, bird feathers, and treasure. Fearing a seizure, his mother, Iris, anxiously transcribes these fragments on her manual Olivetti as they drive to the hospital while Myles, his father, declares his son to be in the midst of a mystic trance.

An EEG reveals nothing wrong with the boy; however, it turns out Iris has cancer, and the prognosis is discouraging. Meanwhile, there’s unrest in New Pond, the Buddhist community in rural Maine the family calls home. Willard, New Pond’s Thoreau-and-jazz-inflected Zen guru, presides over his followers through a kind of glorified fiefdom, demanding free labour at his bakery and sawmill under the aegis of spiritual practice. Community dissension comes to a head as allegations of sexual misconduct further bring Willard’s integrity into question. Sensing “the need for distraction, for respite, for an echo of magnitude” in his and his parents’ lives, the protagonist unfurls his dreamlike trove of images by narrating an increasingly phantasmagorical seafaring story. As hero of this fable, he wakes up on a beach, unable to recall his past, and possessing only a handful of disappearing memories. He finds, too, that he is being shadowed by an enigmatic creature with rustling wings and an animal smell. Later, as stowaway-turned-crew member aboard the Lizzy Madge, he traverses subterranean oceans and time itself in search of what may or may not be the platonic city at the beginning of all things.

Blood Fable, the follow-up to Oisín Curran’s bewitching experimental debut, Mopus, deftly navigates between small-town drama and fantastical adventure, the novel consisting of the fugal interplay between the two. As the seemingly disparate stories progress, unexpected concordances and transpositions are revealed. Running shoes and motor boats anachronistically colour the Jules Verne-esque setting, where giant river otters and dictators posing as goddesses seem to be a clear “fusion and magnification,” as Myles puts it, of actual people and events later encountered in Maine. Adding to the temporal and ontological vertigo, happenings in Maine, imagistically distilled to the likes of “a car accident on a long road” and “firewood dragged on a sled from a broken forest through blue snow,” bear uncanny resemblance to the crumbling mental snapshots that make up the hero of the fable’s missing past.

Things are further complicated by questions of compulsion (is the child having a prophetic vision or is he simply making it up?) and editorial distance: the narrator is relaying the story years later, as a grown man, with the assistance of his parents’ notations, so what we read is filtered through the revisions of three adults. The narrator’s vivid recollections of his mother, his continual references to her in the past tense, initially suggest that Blood Fable’s dual plots revolve around Iris’ illness. But Curran’s metafictional sleights-of-hand destabilize any tidy correspondences, ensuring that the novel is more than an allegory about the masking of trauma. There are surprises and red herrings throughout, and the novel begs rereading.

Blood Fable’s sly reflection upon its own devices, its insistence that the reader continually reconsider their own tentative interpretation, provides one of its greatest satisfactions. Its characters’ musings on aesthetic theory, Buddhist cosmology, and the ambiguity of signs abound, serving as a kind of running commentary on the action. With its unabashed metaphysical inquisitiveness and ambitious juxtaposition of the real and the fantastical, it is reminiscent of a mode of contemporary American cinema that might be dubbed “cosmic psychodrama,” notable examples of which include Darren Aronovsky’s The Fountain, Terrence Malick’s The Tree of Life, and David Lowery’s A Ghost Story, all of which combine modernist domestic drama with sci-fi and fantasy tropes such as time paradoxes, alternate dimensions, and hauntings—the latter de-pulped of the trappings of genre and varnished with a slick indie exterior. At their heart is a breach—the unexpected death of a loved one; a formative childhood trauma—and the cosmos, rather than being cold and indifferent, is imbued with a kind of humanist sublimity that is at least partially sympathetic to questions of witness and posterity. Blood Fable shares the humanist warmth and wonderment of these genre-bending films; but unlike them, it moves away from programmatic questions of grief in favour of a stranger expedition.