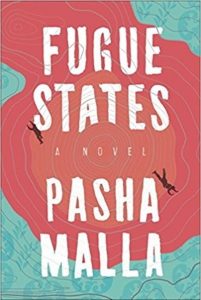 Fugue States is a real oddity of a novel, but one that makes you wonder how much of its oddness is intentional and how much the result of Pasha Malla rolling the dice.

If you take the former position you’ll get some support from the title, which refers to a dissociative state of temporary amnesia that Malla has said was meant as a metaphor for various themes in the book. This leads the reader to expect a disjointed narrative mirroring a personality dissolving in the mists of mental dysfunction.

I don’t think that’s how Fugue States works, but was it even Malla’s aim? The dustjacket sows confusion. Here’s how the story is introduced (I’ll quote from its synopsis to spare myself the chore of writing my own, which is always the dullest part of any review):

Fugue States begins as Ash Dhar, a thirty-something writer, opens his mouth to deliver a eulogy at a funeral—the funeral for his own father, a Kashmir-born doctor. But in that moment between thought and speech, something mysterious occurs: a terrible, wordless gap into which Ash falls helplessly, recovering only as the concerned faces of friends and family shock him into focus.” We are then told that Ash later travels to India to rescue his friend Matt from a jam, and “experiences a second alarming gap, one that echoes and amplifies the mysterious ‘fugue state’ with which the novel begins.

Whoever wrote this obviously thought there was a connection between the two “gaps” that Ash falls into—the one at the beginning and the other at the end of the book – but I’m not sure it’s a connection that Malla (who almost certainly didn’t write it) wants us to make, or was even aware of. I say so because, when the novel begins, Ash does not experience anything like a fugue state but simply loses his train of thought while delivering his father’s eulogy. It’s something that everyone can relate to because it happens to all of us, all the time. Are we supposed to connect this to Ash’s sudden loss of memory in a plane flying over India 275 pages later? I didn’t, but was I missing something?

It’s a question I had to ask quite a few times while reading Fugue States. To take another example, Ash has a friend named Sherene, the producer of the radio show he hosts. Are they in a romantic relationship? Were they? She seems inordinately involved in his life, in ways far beyond the professional. I would have thought her behaviour unlikely for anyone other than a partner, and yet they appear only to be pals.

The same question can be raised with regard to Ash’s relationship with Matt. They were childhood buddies, but there’s no explanation for why they’ve remained so close, as they have almost nothing in common. Other people are mystified by Matt hanging around Ash so much, and the reader shares this confusion. What does Ash see in him other than a source of crude jokes that nobody finds very funny? Mention is made of his “big, bizarre heart,” but this is undercut (to put it mildly) by much of his behaviour. To the reader he seems a boorish, moronic bully with a mean, paranoid streak. Again, one wonders if what’s going on between Ash and Matt goes beyond mere comradeship. Despite plenty of innuendo and badinage early on about their possible homosexuality, Matt and Ash’s remains a harmless bromance until a shocking act of physical violation occurs.

This sudden shift from humour to horror is typical of the novel’s gear-clanging. Near the middle of the book there’s a narrative back and forth between Ash spending time with his family over the Christmas holidays and Matt’s Indian misadventures. We cut between fantasy and reality, slapstick comedy and meditative drama, a domestic vignette of Christmas in London, Ontario (with all the melancholy that implies) and an attempt to rescue a high-priced hooker from the depredations of some sleazy foreign businessmen. Again and again one looks for a connection between these different stories and the way they’re presented. Unable able to find any, we’re left wondering if that lack of connection is the point.

There are, in addition to all these missing connections, a number of elements that are brought up but that simply don’t go anywhere. Fugue States is a novel of loose ends. Early mentions of a video that may have been made of a drunken Ash lead us to expect that it will turn up on social media at some later point. But it never does. Did such a video even exist? Matt is the only one who tells us about it, and he’s a fantasist (not to mention the novel’s feature vanishing act). Later, Ash visits another old friend’s house where he watches this friend get drunk and then helps him to put his disabled son to bed. What does this episode mean? Is there a thematic connection? If so, it remains vague and, in any event, it’s never mentioned again.

Is Malla trying to confuse us? As with all of the broken connections between characters there’s reason to think the dropped narrative threads are intentional. Ash spends much of the book carrying around the manuscript for a novel that his father never finished. This gives us a heads-up that Fugue States might itself be such a fragment. And indeed that’s what it seems to be, as Matt finally dissolves, Pym-like, in a mountain-top white-out and Ash returns via a flashback that feels out of place since Ash still hasn’t recovered his memory. Where is this coda coming from? It has a different typographical heading than the other chapters: a symbol without any clear significance.

A novel this obtrusively chaotic, not to mention one where the protagonist is himself an author obsessed with a mysterious, unfinished text, is obviously going to be concerned to some extent with the matter of how stories are told and where they come from. This is underlined by a comic scene in a writing workshop, and we can say that, in this sense at least, Ash and Matt have something in common: both spin fictions out of the fluid stuff of life. “Making memories,” is what Matt calls the process.

But with no memories, Ash can’t make stories. He loses agency and becomes mere material, almost a piece of luggage. Fugue States spends a lot of time addressing the meaning of home, and in the end I think it plumps for the idea that home isn’t a place so much as it is other people. Who we are is relational, a composite portrait made up of how people view us. Interpreted this way, there’s something cubist in Fugue State’s unmooring of these perspectives, and it might even be seen as a virtuosic turn at narrative fragmentation. If nothing else, Malla shows his willingness to play with conventions and upset expectations of what we think a novel, or a person, should be. Judging his success depends on whether you feel this was a game he wanted to play with us or if he simply lost the plot.