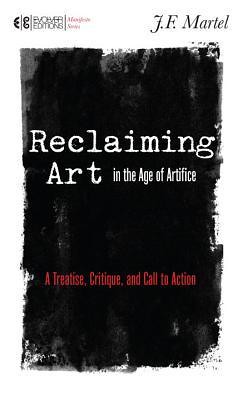 Reclaiming Art in the Age of Artifice: A Treatise, Critique, and Call to Action
J.F. Martel
Evolver Editions, 2015
208 pages

Claiming powers of prophecy, mystery, and liberation for art is distinctly unfashionable in today’s cynical, overstimulated world. In Reclaiming Art in the Age of Artifice, the filmmaker and writer J.F. Martel has set himself the immense, indeed arrogant, task of redefining the role of art for a cataclysmic age saturated in kitsch and the manipulative image. That a Canadian has done so — and has provided a most unCanadian subtitle for his book — is cause for rejoicing. What Martel has given us is a profoundly important work that ought to be required reading for every artist in Canada and beyond.

Martel boldly plunges in by beginning his book with a manifesto that’s a testament to the spiritual force fields created by art.  “Only through art can human beings express and share the archetypal powers that shape the universe . . . To reclaim it might enable us to recover our faith in this world, and act in accordance with that faith for the benefit of life on earth.” He goes on to explicitly set out his goal in his preface, describing his book as “an attempt to explore the nature of art at the present historical moment” that will — or so he hopes — instill a deeper appreciation for its unique power as well as a sense of urgency about making art more central to our lives. He acknowledges the apparent outrageousness of this goal — what can art offer us in the face of today’s global challenges? — then answers by claiming a function that only art can perform. “Art,” he says, summarizing a quote from Proust, “is a meeting place in which human beings commune at a level that ordinary language and sign systems do not allow.”

Martel understands as few artists do that we are undergoing a capitalist colonization of the mind — what he calls “the operation to supplant the dream-space of soul and psyche with a fully controllable interface.” In an age of information, amusement, and distraction, it is the urgent role of the artist to reclaim the space of the imagination, to resist the encroachment of mass-manufactured and manipulative dream. Art calls us out of utilitarian mental space into mystery, into acknowledging that we are in the presence of our own unknowability, our wonder and fear at forces greater than ourselves. “Human consciousness,” says Martel, “has access to a powerful otherworld, the place of dreams and myth, poetry and lunacy.” The term he chooses for this otherworld is the “imaginal,” coined by the Islamic scholar Henry Corbin to describe the intermediate realm between the human and the divine. Art is thus “a concrete manifestation of this imaginal realm in the public sphere, [calling]us back to the source as a matter of course.”

If this language seems overwrought to some modern readers, or too god-influenced, that’s because it’s difficult to find the appropriate language in our age to talk about art. Martel ranges widely in his examples, from the Chauvet cave paintings to Coleridge, from Stanley Kubrick to Immanuel Kant. He sees art (accurately, in my view) as “paranormal,” anomalous. Art asks us to abandon our faith in explanations, “discloses our own mystery even as it lays bare the mystery of consciousness and the mystery of the world.” Where do stories come from after all? Every writer is asked this question, and I doubt any writer has come up with an adequate answer, either for herself or her interlocutors.

Martel also uses the term “the Real,” another idiom from Islamic Sufi vocabulary that refers to the unitary cosmos beyond the illusory veil of the everyday. Art calls us “out of the ordinary and into the Weird.” He describes the common experience of coming out of the cinema after watching a powerful film and seeing everything with new immediacy. “It is as if the film had done something to the world,” Martel says. It hasn’t, of course — it’s done something to us, but since we are each the vehicle of perception for that world, it is the world itself that seems altered. Great art has the power to open us to an ecstatic state, lets us briefly inhabit the imaginal before coming back, transformed.

Martel argues forcefully against contemporary notions of aesthetic relativism — that all art is culturally determined, and that “art” itself is an elastic term that defies definition. Art, he says, is the outcome of an inborn human drive, what he calls “an objective pursuit with the same claim to truth as science, albeit truth of a different order.” But if art “penetrate[s]the closed perimeter of our lives” — the goal of all true art, according to Martel — our apathetic age is well-guarded against such engagement, which is seen as naive and embarrassing. “Every great artistic work is a quiet apocalypse,” Martel says, quoting Northrop Frye, that “arrest[s]the discursive mind, raising it to a level of reality that is more expansive than the egoic dimension we normally inhabit. In this sense, art is the transfiguration of the world.”

What does Martel mean by artifice? He defines it as false art that “foregoes the revelatory power that is art’s prerogative.” Artifice, which includes both propaganda and pornography, is essentially manipulative; it “aim[s]to make the percipient act, think, or feel in a certain prescribed manner.” By way of example, he cites the movie Avatar providing an aesthetic spectacle in which all emotions, opinions, and conclusions are pre-digested for the audience. All artifice, says Martel, seeks what he calls “a univocal effect, a single meaning.” So what? might be the response of many viewers. If such a movie provides enjoyment and entertainment, why does it matter if it’s mediocre art? It matters because works of artifice reinforce the world of what Martel calls Consensus: “the cloud of received opinions and ideas in which we live.” Consensus works against imagination and creativity; manipulates us, instead, into believing that the reality we inhabit is the only conceivable one, and legitimates a simplistic binary division of the world into good guys and bad guys. The results of such moral simplification are all around us, from the West’s obsession with violence and war to its treatment of refugees, the poor, and anyone else w relegated to the category of “loser.” Art that cannot face the truth, that is unwilling to tolerate ambiguity, becomes kitsch — what Martel, referring to Milan Kundera’s definition, calls “the absolute denial of the ‘shit’ dimension, the world minus everything we don’t like about it.”

Reclaiming Art in the Age of Artifice is not without its flaws. In an era when the discoveries of quantum physics are transforming our cosmic paradigm, Martel seems unaware of the implications of this. Quantum physicists often speak in language that takes us very close to the spiritual, reinforcing art’s insights by redefining reality. “I think that modern physics has definitely decided in favor of Plato,” says physicist Werner Heisenberg. “In fact, the smallest units of matter are not physical objects in the ordinary sense; they are forms, ideas which can be expressed unambiguously only in mathematical language.”  The idea of “stuff” — especially solid, motionless stuff — has been completely discredited by modern physics. The illusion of solidity and stability is just that, an illusion created by the limits of our senses. Reality, in other words, isn’t real. The Real — normally accessible only through religion or art — exists behind so-called reality, independent of our senses.

Martel also reasserts the solipsistic and self-serving argument that humans are unique among animals, even while he acknowledges that such a claim is today seen as arrogant. “Other animals,” he says, “do astounding things, but spinning free-floating images of possible worlds from raw psychic material isn’t one of them.” This is a flawed argument even in scientific terms. The fact is, we do not know enough about animals’ internal states to make such a claim. Many of our beliefs about animals — that they don’t have language, don’t use tools, don’t have a sense of self — have all been overturned by actual evidence, at least for certain species. And since we know that whales compose songs of immense complexity, who’s to say they don’t have art? In the context of a call to remember art’s spiritual origins, Martel would do well to remember that such a devaluing of the animal is antithetical to aboriginal cosmologies.

Reclaiming Art works better as a treatise and critique than a call to action; Martel himself would probably acknowledge this. Cultural resistance, in fact, is happening in ways that take us beyond the propaganda of the deed or ideologically driven art forms. The Dark Mountain Project in the UK, as just one example, marks a significant attempt to embody many of Martel’s aims: the movement seeks to reclaim art, specifically writing and storytelling, from market-driven forces by redefining the kinds of stories we need and by providing a vehicle, in the form of biannual anthologies, for stories, essays, poems, and art that speak to that hunger. The online Canadian journal Dark Matter: Women Witnessing, founded two years ago, publishes “writing and visual art created in response to an age of massive species loss and ecological disaster. It is a home for dreams, visions, and communications with the nonhuman world — especially those with messages for how we might begin to heal our broken relationship to the earth.” Aboriginal writers such as Leanne Betasamosake Simpson have written extensively about the need for a new relationship of “deep reciprocity” with the land and its inhabitants, human and other-than-human. Developing such a new relationship requires not only political action but also acts of re-imagination, including empathy with the Other.

What we are witnessing, I believe, is the beginnings of what James Hillman, in The Dream and the Underworld, calls “[a]move backwards from logos to mythos, this move against the historical stream of our culture.” Rational logos, so destructively dominant in our Western culture, has led us astray by ignoring the intuitive, the instinctive, the intangible in favour of the so-called rational (or, more accurately, rationalization). Martel’s book is an essential addition to that growing movement. He directly addresses his fellow artists in the epilogue: “For those of us who make art, this means taking the job seriously enough to pursue the visions that come from within rather than those that are foisted upon us by social pressures, popular taste, and the whims of the market.” We must, he argues, approach artistic symbols as “living beings” that are not “static objects but dynamic events.” In that dance of being lies our only hope of re-envisioning our relationships to each other, and to the cosmos.