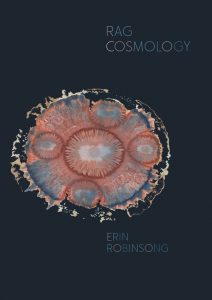 Merriam-Webster defines cosmology as “a branch of metaphysics that deals with the nature of the universe.” Cosmology is also described as a branch of philosophy, astronomy, and science. NASA thinks in terms of the latter, defining it as “the scientific study of the large scale properties of the universe as a whole.” Merriam-Webster and NASA bookend my thinking on Erin Robinsong’s expansive, breathing poetry debut Rag Cosmology. A “branch” of metaphysics, the “nature” of the universe—I can’t help but delight in the greenery of this language in relation to Robinsong’s earthy, ecological confessionalism. As for NASA, Robinsong is highly skilled at playing with scale. Even at her most intimate, a microcosmic detail can suddenly explode to encompass the entire universe.

Pleasure and terror are not mutually exclusive in Rag Cosmology. In fact, they’re bedfellows. As Robinsong says in an interview with Open Book, she’s enthralled by the “weird, sexy, pulsating intimacy we share with the earth.” The collection opens bidding the reader to “look at this brown day/hosted by beauty,” to keep negative capability in our minds from the outset. The beauty of how a “tree mulches itself” is held closely against the discomfort of realizing the world is “[b]orn for this funeral.” Put another way, we “die into life.”

It’s absolutely fascinating to experience the collection’s charismatic joie de vivre alongside its haunted doomsday anxieties. As the speaker says in the long poem cycle “Desk Vibrations”: “I don’t want this recycled//doom, I want a love weird enough to be a spell//that breaks the spell.”

I’ve often felt that negativity is perceived as the more valid response to serious issues, that it is somehow the braver reaction. Critics and pundits mustn’t sugarcoat. Instead they need to be “realistic,” wizened, sometimes cynical. I have faith that this is one of the spells that Robinsong’s weird love can break. One reason the poems in Rag Cosmology are so moving is that they stare terrifying realities in the face while maintaining their capacity for wonder. There is room for sweetness (and wetness).

Critical thinking does not need to be joyless to be legitimate: The poem “Sequences” elides the “stamina of fleurs” with the “stamina of gravity.” The whimsy of a flower, the pull of unknown forces that connect us to the universe—each element, whether of epic or miniscule proportions, is drawing from the same energy source.

Robinsong also breaks down the spell of the perceived split between human beings and the fate of the environment. Highlighting our interrelations between oceans, trees, and the rest of the environment seems obvious yet ominous in the age of climate change and its deniers. One of the book’s most iconic moments comes when the speaker declares:“I don’t bleach my asshole//I gold leaf it,” a statement preceded by the almost mythological image of night “falling from a singing bird’s bright anus.”

Trees are the epitome of desire in “Autobiography,” as letters explode and reconfigure themselves across the page in different punning variations of “pine fir yew.” Water is also a constant spectre, an essential resource whose personal and political resonances are always pooling nearby. The “politics of hot and bleached//oceans” culminates in the poem “It Is No Good and I Continue”: “Do you miss the ocean? Of course! The ocean misses me too.”

Rag Cosmology contains over forty italicized quotations woven seamlessly into the poems like the line above, attributed to an interview with Cecilia Vicuña and Jonathan Skinner published in ecopoetics no. 1 (2001). The title of the poem itself is foraged from Lisa Robertson’s 3 Summers (Coach House Books). Robinsong is both discerning and voracious with her sources, conjuring voice fragments from Heraclitus, Homer, Barthes, Bataille, Abramović, Fred Moten, Bernadette Mayer, and Tom Waits, to name only a few.The borrowed lines manage to add emphasis without disruption. By channelling her ragtag team of influences, Robinsong heightens the collection’s sense of harmony and connectedness.

Sex and nature cannot be compartmentalized. Life and pleasure cannot be separated. The poems in Rag Cosmology remind us that we are all part of the world’s constant intercourse.