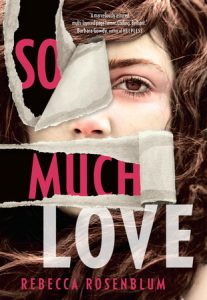 So Much Love
by Rebecca Rosenblum
McClelland & Stewart
304 pages

Rebecca Rosenblum’s earlier books, the short-story collections Once (2008) and The Big Dream (2011), were greeted with awards and critical praise. With So Much Love she ventures onto the field of the novel. It is a work that fits into the burgeoning abducted-woman genre, and the back cover shapes expectations with comparisons to Room and The Lovely Bones. The risk is: Will the content be too familiar?

In early 2016 I watched Rosenblum read an excerpt from the novel, specifically from the chapter “Castle,” which is the only one told in the voice of Dex. It gives nothing away to say that Dex is a bad man – his name billboards it (the television series Dexter comes to mind) – and the iron grip that keeps his home a fortress is aligned with his narrative’s tone and content, which are presented in the second person singular. He disregards normal politeness and protects himself from neighbourly intrusion:

“I said, get away. Who are you, coming here? No one asked you here.” You’re hot, sweating, shaking with exhaustion and rage – probably saying too much. But you need to be clear, need to make sure there’s no doubt. “You take care of your own, I say – you take care of your household’s needs, I’ll take care of mine. Now get the fuck away from my house.”

Dex speaks from an ugly, but not unintelligible part of the mind, and his chapter stands out for its menace and isolation.

Unfortunately, that energy is not harnessed again. The chapters in So Much Love shift between this and that person and time period in a manner reminiscent of the stories in The Big Dream. Too reminiscent: there’s not enough that’s new here in form. So Much Love establishes Venn diagrams between the abductees – a high-school student named Donny and a waitress, Catherine Reindeer, who survives – their families, and friends: Catherine’s husband, Grey Reindeer (“a weird name,” thinks one character), his mother-in-law Sue, Donny’s girlfriend Kyla, and a fictional poet, Julianna Ohlin, whose work Catherine studied and whose life in some ways parallels her own. Also like Catherine, she faces male violence and dies at the hands of her boyfriend.

Among other things, these interconnections among the characters, many of who work alongside each other to build homes, relationships, or a body of work, express Rosenblum’s aspiration to forge community (Dex being the outlier in this regard). Yet the language used to describe their efforts – apart from Dex and Catherine post-escape – is homogenous. For example, when Grey first sees his wife after she’s escaped from Dex you’d expect him to rush to her side. Instead, it takes six pages to move him from the doorway of her hospital room to her bed as he considers various matters during what the narrative sets up as a highly emotional time. “On some level, ever since he met Catherine, he had known that his happiness couldn’t last. That he would spend a birthday alone, sitting in a lawn chair in the rain so as not to hear the wail of the phone inside the house… He was a man who believed in catastrophe.” The scene’s glacial pace might be a method to slow time down and allow waves of emotions to be registered, but the same, even voice is used when Len Altaris, one of Catherine’s professors, contemplates his fading marriage to Gretta: “It isn’t until we are finally on the 414 and through the trauma of the merge that it occurs to me that I didn’t actually apologize for my lateness. That ship has sailed. The only things I have to talk about now are my morning, the posters on campus, my grim presentation on the dead poet. But those all belong to the category of things Gretta doesn’t know about, that belong only to me.” In a novel filled with characters, there are too few personal registers to sufficiently individualize each one.

At one point, Altaris raises a pertinent question: “‘The actual words [Ohlin] uses are her subject in a way. The beauty of the language imbues the object, don’t you think? Kitchen-sink realism but also… more?’” Rebecca Rosenblum’s language expeditiously conveys plot and character, but if she’d spent more time burnishing her words – making them beautiful, to use Altaris’ word – she’d have more viscerally captured Catherine’s suffering. (PTSD-afflicted readers may disagree.) So Much Love contains narrative civility, civic-mindedness, and surface interconnectivity, which, depending on taste, can be virtues. For me, there isn’t enough palpable anger at the injustice shown, and the telling of this oft-told (and seen) story is too well-mannered. We are positioned to observe events as if through a screen when we could have been right there on the page.