By Emily Donaldson on December 22, 2022 Reviews 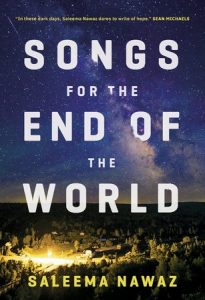 Songs for the End of the World
by Saleema Nawaz
McClelland & Stewart, 440 pages.

It’s exceedingly difficult to discuss Saleema Nawaz’s new work of fiction outside of the context in which it was published. Slated for release in the spring of 2020, Songs for the End of the World is about a novel coronavirus, called ARAMIS, that originates in rural China and quickly spreads around the world, killing thousands and shutting down large chunks of society and the global economy.

Unfortunately, the print edition of this book was delayed until late summer 2020, after an actual coronavirus, called COVID-19, originating in rural China and spreading quickly throughout the world, was declared a pandemic in mid-March and shut down large chunks of society and the global economy, including bookstores. Much has been made of just how prescient Songs is, considering Nawaz researched, wrote, and revised the novel between 2013 and 2019, well before anyone had heard of COVID-19.

And it is prescient. Reading about this long novel’s wide cast of characters and what they’re seeing and going through, the parallels between their experiences and ours, is chilling to say the least. So much seems familiar: keeping several feet apart from strangers in the grocery-store line; the loneliness of social distancing and quarantine; ordering food at home and having the delivery person leave it at your door and run off before you can thank them, for fear of contamination; the racism directed at Asians over the disease’s origins; the states of emergency put in place but then lifted prematurely, causing further outbreaks of the disease.

Songs not only feels “meta,” it also achieves a level of what we might call “double meta.” One of the book’s chief characters, Owen Grant, an author and chronic womanizer, wrote a novel about a fictional pandemic years before the arrival of ARAMIS, and is now seeing this book climb to the top of the bestseller lists as readers try to make sense of what is happening to the world. Sarah, a character who will play a pivotal role in Owen’s life, articulates what many are thinking about his book, and what many of us may be thinking about Nawaz’s: “The more time she spent immersed in the world of his novel, the less she was able to distinguish between the real facts and the invented ones.”

And yet, despite all this, I think it is critically important to look at Nawaz’s work outside of the context of COVID-19. As someone who also published a post-apocalyptic novel in 2020, I know just how much one hopes a book of this sort will be judged on its own merits. This is especially the case with Songs, an expansive and richly imagined fictional world full of characters whose lives converge and interlock in startling and compelling ways. To even hint at exactly some of those intersections almost feels like a spoiler, but here goes. The first character we meet is Elliot Howe, a police officer who was in the restaurant where the first North American contamination of ARAMIS occurred. He is Sarah’s brother, who later in the novel ends up living with Owen on a boat he purchases to escape the chaos of the pandemic. That boat was once owned by the parents of Emma Aslet, who grows up to form a band with her husband, Stuart Jenkins, who in turn went to a university where Owen once served as writer-in-residence.

This just scratches the surface of how these and other characters’ lives overlap as the novel flashes back and forth in time to give us context around ARAMIS and its fallout on real people. Some readers may find all these coincidences a contrivance too far, but they also speak to a broader theme—the importance of relationships in the face of disaster. The message is clear: it’s better to find connection where you can rather than face catastrophe alone. This is a common theme in post-apocalyptic narratives, from The Stand to Station Eleven. And many of the characters in Nawaz’s novel use the pandemic to reevaluate their relationships and life decisions—something else that will resonate with many during COVID-19.

The last word on this theme is left to Owen’s long-suffering and often-betrayed ex-wife, Rachel, in a note she writes to him that he never gets to read. In a sentiment reminiscent of the last sentence of Alistair MacLeod’s novel No Great Mischief, she says, “When we loved, we were our best. We were infinite.” If that isn’t a balm for our trying and uncertain times, I don’t know what is.