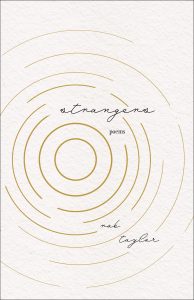 Rob Taylor’s fourth book of poetry, Strangers, masterfully holds together the contradictions of being fully alive in a world of loss. “Without contraries is no progression,” wrote William Blake. Taylor and Blake are not besties (as far as I can tell), but there is a gregariousness of spirit in Taylor’s poems that could sit alongside any canonical author’s songs of innocence and experience. In contradistinction to Blake, Taylor writes just next to the spiritual, honing his pen on the seen, heard, and felt while fully acknowledging the potency of dreams, imagination, and the heart.

The people we hold dearest may very well be strangers to one another and the tension in this strange proximity is set in motion as a theme in the first poem of the collection (with a title that echoes the book in the first of many word doublings). The poem begins “At three, on vacation, my mother and I alone / on an aerial tour (two seats no exceptions.” Here, a line break augments a separateness that’s painfully strained as the father gets smaller and smaller under the helicopter’s ascent. In the third stanza, we travel temporally: “Nine years later his hand, warm, / was thirty minutes later cold.” The next stanza brings in Elise Partridge, a poet who passed in 2015, whose work, the writer acknowledges, doesn’t offer consolation so much as a place of return. “But I saw him Elise. / He was your poems.” The emotional impact of this compression of experiences is assuaged in the overlapping of lives. Of these two loved ones, the author writes, “You would be strangers / if not for this.” “This” being the ephemeral and felt shape of a poem.

This expansiveness of the heart also observes the contrasting and overlapping natures of the linguistic and non-linguistic. Words as units of meaning aren’t just the little things in a dictionary. In “Country Roads” the author writes about his son’s wave “stretched four fingers out / then to your palm. It was your first word, / that opening and closing.” The limitations of language are explored in “Aubade,” where the author suggests that an embrace holds much more than any words. He writes to his wife that “words [are]an ancient faith / a fate we long before / abandoned to the light” (and once again a curious repetition that in this case frames the poem, here in assonance and alliteration: ‘aubade,’ and ‘abandoned’). Within the limitations of language a music is composed for the different ways of making meaning.

Grief and laughter sit side by side through the collection. From the loss of a father in the first poem and its many silences, the second poem bursts out in laughter. There’s an anecdote about the speaker’s mother accidentally closing the car trunk on her young son’s neck. Panic rises from the poem’s centre, but there’s also assurance “wrapped within her story and her laugh / the laugh that soothed the knots / and fused the sea / inside me.” It’s as if the laughter that runs through the rest of the book is a tribute in memory to the poet’s mother, but it also wards off the darker thoughts that come in the midst of death’s prevalence.  “Love, fidelity, etc.,” a poem played through thoughts and addressed to a wedding ring, ends with the author imagining the wedding ring six-feet under, where “you’ll linger years in the earth / until all you encircle is earth.” To explain these lines risks morbidity, but seen in the context of the poem’s craft they hold a span of time we tend not to consider, which feels monumentally humbling.

Life and death and so many other oppostionals are held together in Strangers by a resplendence of poetic forms, whether that’s two words curiously positioned side by side (“cherub-skull / thwacked”), traditional forms playing off each other, or any number of the free-verse poems that are all aware of rhythm. The loveliness of Taylor’s attention to language comes in an ear for how sound makes meaning. In “Speak When Illuminated,” the author shares a bedtime ritual of childhood where “I lie in bed, await three knocks from my parents’ side / of our adjoining wall. One each for I, love, and you – / then I reply. With one more added on for too.” Attuned to the meaning of three or four knocks, the poem’s ending on a three-stress line, “I am not a child anymore,” reinforces the passing of time.

This superb book of poetry combines the difficulty of losing those we love with an openness to those who are living, known and unknown. Ultimately, Taylor sets up the sounds that create a space for the spirits to come.