Somewhere in the gathering dawn beyond the blinds, the first car alarm in March hails the sun.

A lone reader in the middle of the night, desperately tired and dripping milk, a glow in the hand, a pillow in the small of the back. One sweltering night, while reading Suzanne Buffam’s A Pillow Book, I lay awake ruminating that my breastfeeding pillow, an engorged C ringed with stylized elephants, was not only preventing me from flopping backwards as I nursed my indifferent newborn, it was also reinforcing a posture that I’d only before seen in farm animals. Pigs, definitely. Dogs. Hard working barn cats. A cow, but only briefly, before she got right back on her feet. None of these animals needed pillows, none leveraged straw into a supportive wedge, and none, coincidentally, seemed to have any trouble falling asleep. I wondered: Is insomnia a curse of an uncomfortable body or an uncomfortable mind? 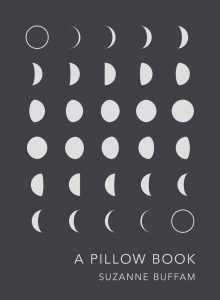 For Buffam’s unwittingly wakeful narrator, it’s both: “I have the sleep hygiene of a narcoleptic truck-driver on crank, I learn on my pillow by my phone’s blue glow. My failure is moral, as much as it is physiological.” In search of a solution, she’ll try anything: “Melatonin. Lunesta. Nyquil. Zzzquil. Ativan. Ambien. Lorazepam. Trazodone. Warm milk. Hot baths. Counting sheep. Counting backwards from a thousand in French. Still I toss and turn through the night with a pillow on my head and another clutched like a mule between my knees.” The somewhat disingenuous jacket copy tells us that Buffam’s “private tour through the dim-lit valley of fitful sleep ”is neither a memoir nor an epic, neither a spell, nor a shopping list, nor a field report, though all of these genres find some degree of purchase in the book’s ninety-five pages of artfully ad hoc lists, desires, and observations, all wryly rendered in the deadpan prose of the sleep deprived. Later poems illuminate a smartphone’s desperately unhygienic 2 am tour of Amazon, enumerating “The Brookstone Biosense Memory Foam Shoulder Pillow. The Sleep Innovations Gel Memory Foam Contour Pillow. The Viscofresh Advanced Contour Memory Foam Classic Pillow.”

Despite herself, our narrator does manage to sleep sometimes, riddling the codex of her pillow with tales of “[w]earing a burka and cowboy boots, and pushing a wheel-barrow full of fluorescent lightbulbs through the snow,” though, pace Freud, such dreams “seldom pose much of a hermeneutical challenge … A pillow is a pillow. A siren, a cry. Wake up.” Insomniacs, we learn, are notoriously unreliable memoirists, prone to hyperbole: “the majority of sufferers radically underestimate both the quality and quantity of their sleep … I fan insomniac claims to drowse two or three fitful hours on her pillow, studies find, she has probably passed, in perfect peace, at least twice that time.”

As her title suggests, Buffam wrestles with two conceits. The first is intertextual, a call and response to eleventh-century Japanese courtesan Sei Shōnagon’s The Pillow Book, a series of nocturnal ruminations on counsellors and chancellors, robes of coloured silk, and nice white paper, Michinoku paper, and white decorated paper.” Shōnagon’s pillow book serves both as Buffam’s model and as yet another insomnia aid: “It affords sufficient distraction on one’s pillow at night to transport one to a late Kurosawa dream sequence, but also enough repetitive and inconsequential minutiae to conjure, on a good night, the infinitely gentle god of sleep.” In her time, Shōnagon served the Empress Sadako, and Buffam’s narrator likewise serves “Her Majesty,” a small but insistent mistress prone to dive-bombing her dreaming mother to proclaim “my nostril breath smells like spaghetti.” There are no solutions for the agonizing mental and physical insomnia caused by children: “At a loss for words myself, I don’t reply. I sit at Her Majesty’s bedside that night and watch snowy pillows pile up on the peeling deckchairs outside.”

A Pillow Book’s second conceit is pillows, and Buffam offers a sustained manifestation on the things upon which humans rest their heads, items of ambivalent torture to those who cannot rest. Proverbial Spanish, Mongolian, and Maori pillows turn the screws: “Sleep faster, says a Yiddish proverb. We need the pillows.” Readers likewise learn of “a smooth block of unpainted wood … found in the tomb of an Egyptian mummy in the Forth Dynastic town of Gebele in, on the banks of the Nile River,” and of a sixteen-year-old Neanderthal boy whose “toothy skull, with its lumbering brow-ridge and sloping forehead, rested on a small, undisturbed cairn of ancient stones.” Shōnagon’s pillow too, appears: “We know that she slept, when she managed to do so, on a small, hollow pillow made of polished bamboo.” In Buffam’s telling, the pillows of recorded history are made of inappropriately sturdy stuff, a fact drily acknowledged: “Sandstone. Limestone. Terracotta. Jade. Granite. Ivory. Alabaster. Brass. Porcelain. Iron. Cherry-wood. Glass. No evidence suggests that pillows fashioned from such materials were more comfortable in the past than today.”

Both Shōnagon and Buffam’s pillow books abound in catalogues, and Buffam’s lists of under appreciated categories (“Dubious Doctors,” “Beautiful Names for Hideous Things”) are the gems of the volume, particularly those hinging on a recurring joke about unpalatable herbal tea. Some, especially those rendered in alphabetized form, tend too much towards the nonsensical, Google-diving listicle to best display Buffam’s cleverness, a flaw that is sometimes amplified by insufficient editorial attention to mise-en-page. Beginning on a recto, a list of ten sufficiently arch things that are“Unendurable” (ending with the wicked combination of  “A prenatal pole-dancing class. / An undergraduate who has just discovered Foucault”) is continued to banal effect an additional three times on a verso. This flatness is all the more unfortunate given of Buffam’s talent for starting off such lists brilliantly:

NOT RELAXED
Feminists on a list-serv.

Kept bedside, A Pillow Book calls out to the uneasy, ironic insomniacs, unhygienic in their sleep habits, voracious in their reading, painfully accurate in their self-awareness “that we are already dead.”