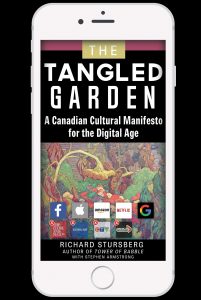 Our first warnings about the internet’s impact grew out of our personal experience of it. You didn’t need any technical expertise to see how it was changing everything about our lives, from the way we work to the way we relate to one another; even how we think. Some early critics argued that it was a weapon of mass distraction, others that it was making us stupid. Agree or disagree, one could at least relate to what was being said.

Less obvious, because less visible and slower to develop, were its effects on privacy, politics, the economy, and the broader cultural ecosystem. Warnings on these fronts, however, have been growing in volume. In The Tangled Garden, Richard Stursberg offers his take on where we are and what we should be doing in the face of the threat, particularly in relation to the oligopoly of the FAANGs: an acronym for the digital economy’s behemoths (Facebook, Apple, Amazon, Netflix, and Google). Stursberg’s greatest concern, however, is about the impact these corporate giants are having on the news media.

Stursberg has spent decades working in media matters, advising governments and the private sector. In the 2000s he served as the CBC’s executive vice-president, an experience he described in his previous book, The Tower of Babble. His is thus an insider’s look into how we arrived at the present crisis, and he begins it with an examination of the approaches taken by the Mulroney, Chrétien, Harper, and Trudeau governments in dealing with the culture file.

This makes for an interesting history lesson, with many colourful character sketches and analyses of various reports and special commissions. But little of it directly bears on the situation today. Some questions have persisted—what is Canadian content? How should it, or can it, best be supported?—but the garden of Canadian culture (to use Stursberg’s preferred metaphor) has changed utterly.

Utterly, and very, very quickly. Stursberg calls 2010 “the high water mark of Canadian media,” led by profitable newspapers thick with ads. Less than a decade later, “The glory days are completely gone. All that is left are losses as far as the eye can see.”

This was not a slow-developing train wreck. An entire industry was wiped out almost overnight, mainly due to the loss of advertising dollars. Yes, we still have newspapers and news programs on TV, but they’re shadows of what they were just ten years ago, and their future looks grim. Meanwhile, Canada’s film industry and publishing houses have become mere “hobby farms.” The only part of the digital world Canadians have had any success with is pornography, led by the Montreal-based company MindGeek, which gives you an idea where the internet economy is leading us.

Though more memoir than manifesto, The Tangled Garden does close with some recommendations. These boil down to levelling the playing field in a way that forces the FAANGs to abide by the same tax rules as Canadian media companies. All of which is just common sense, not to mention fair, quick, and (unlike a lot of political fixes) easy.

But as Stursberg documents, there have been no end of recommendations, reviews, commissions, and reports on this subject for decades. As I write, yet another federal panel is preparing yet another report that sounds very much like the rest. Political solutions take political will, which is something Stursberg finds lacking, especially among the “sleepy gardeners” of Justin Trudeau’s government. While countries around the world have been raising alarms and taking action to curb the FAANGs’ power and negative impact, the response in Canada has been “profoundly passive.” Stursberg is genuinely baffled as to why we’ve fallen asleep at the switch, and I share some of his confusion. Unlike Liberal promises to reform the Senate and our electoral system, which were never going to be kept given the institutional sclerosis that has set in, one would have thought tighter regulation of the digital giants would be doable, especially given Canada’s historically greater receptivity to such things.

What seems to be lacking is both leadership and any public demand for action. The depressing conclusion one is led to draw is that Canadians don’t care very much about Canadian culture. Stursberg does the usual genuflecting toward that culture as “the ongoing national discussion that makes sense of our lives as citizens and Canadians,” but I get the sense that few people believe this anymore. They’d rather watch some (cheap) Netflix and chill, while falling into what Stursberg describes as “a smaller, meaner world.”