By Emily Donaldson on September 16, 2022 Reviews 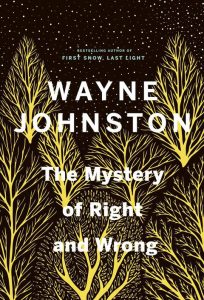 The Mystery of Right and Wrong
by Wayne Johnston
Penguin Random House, 560 pages.

Wayne Johnston’s latest novel begins in 1969 as the van Hout family, Hans and Myra and their four daughters, leaves South Africa for St. John’s, Newfoundland, where Hans has taken a teaching post. The story will later shift back to Cape Town and then Amsterdam, before returning to Newfoundland.

No one in the family is particularly thrilled to be in St. John’s; as the girls come of age they leave, and even Hans and Myra spend their summers abroad. By 1983, when Wade Jackson, an aspiring writer from Petty Harbour, meets the van Houts’ youngest daughter, twenty-one-year-old Rachel, she is the only one occupying the family home on Freshwater Road. They meet at the Memorial University library, and within minutes Rachel has told Wade most of her salient details in a long, seemingly rehearsed monologue: “She’d spoken as if she’d had to get it all out in a preordained amount of time. I wondered how much of what she had just said was true. I wondered if there might be something wrong with her.”

It would be a quirk if it didn’t turn out that nearly every other character in the book also speaks this way. The effect is of character development in giant installments and mostly in retrospect. Even recent escalations in the tension between the sisters, and between their partners, emerge fully formed, the result of activities off the page.

In fairness, there is something wrong with each of the four sisters. Bethany is battling anorexia, Carmen has various drug addictions, and Gloria is on her third rocky marriage. Rachel is obsessed with The Diary of Anne Frank, understandable because her father claims to have been a member of the Dutch resistance as a teenager during the Second World War—except that Rachel has been steadily rereading it almost to the exclusion of anything else since she was in grade five. This hyperlexia is paired with hypergraphia, a staggering, compulsive amount of writing in her own diary, a work she calls The Arelliad.

The Arelliad takes as its model a poem Hans has been writing and reciting to the girls since they were children, a sort of running family story/personal defense called The Ballad of the Clan van Hout. Composed in iambic tetrameter—parts of it serviceable, parts a stretch—it provides Hans’ (egomaniacal) take on his family and on his experiences during the war:

What it shows the reader, though, is not much more than what is revealed in Hans’ exchanges with his family and in the backstory Rachel tells Wade. In this novel that is about writing, about where we put our secrets, neither The Ballad nor The Arelliad supplies content that stands out notably from the rest of the novel. Indeed, we circle around the same set of details, stirred thoroughly in the various storytelling modes, occasionally punctuated by revelations which everyone concerned processes implausibly quickly. This has the effect of flattening both the secrets that emerge and the suffering each daughter is experiencing.

My sense is that Johnston was aiming for some degree of flattening, exposing truth to the light. Bethany frequently expounds on her own anorexia and Rachel’s hypergraphia: “We’re on to each other, Wade. She knows why I’m wearing this loose-fitting dress, and I know why her hand is blue.” But possibly because of the sheer amount of repetition and, well, talk, there’s the impression of having skipped over the part when anything was being kept secret. If it’s gallows humour, it falls short for lack of anything more restrained to bounce off of.

In my first flip through the book I spotted an Author’s Note that I decided I wouldn’t skip ahead to, for the sake of reading novel as novel. Without spoiling (because despite their flatness in Johnston’s rendering, as facts these family secrets are undeniably shattering), I will say that for a writer to want to fictionalize a story like this one, one that is mostly not his own, there should be some mighty good reasons and it should be approached with serious skill. Based on Johnston’s note, I think there were good reasons, and based on his backlist, including The Colony of Unrequited Dreams, whose characters I still remember well, those skills have previously been demonstrated. But I don’t think they come together here.