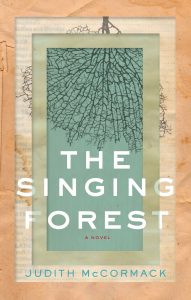 Judith McCormack’s The Singing Forest is a reflective legal novel, one that spends more time in the personal history of its lawyer protagonist, Leah Jarvis, than it does in the courtroom. Jarvis’ Toronto firm is working for the government on the deportation of one Stefan Drozd, an old man who may have once been a young murderer, an NKVD operative in Belarus.

McCormack, once a practicing lawyer herself, has created an atypical novel of the law, one that is as concerned with family, morality, and uncertainty as with the idea of justice. A thriller this is not, and very deliberately. Refreshing as this approach to a courtroom novel is, there are certain conventions that would have been welcome. Dispensing with quotation marks around dialogue in literary fiction has become quite popular, but it may have been an error in this particular novel. In The Singing Forest’s frequent quiet moments, the passage from speech to internal rumination is executed smoothly, but in courtroom and office-politics sequences, the lack of quotation marks creates frequent gaps of hesitation for the reader. Characters converse, McCormack describes the scene, and Leah has internal asides, thoughts, and questions—too often, the reader is unmoored several times per page.

The Singing Forest chronicles many varieties of ambiguity, from Drozd’s moral slippage from being a victim of violence to becoming a creator of violence, to the more gentle uncertainties of a nascent relationship in post-coital moments (“Something distinctive, unmistakable, spelled out by the arms and legs. But this too is formless, this tender fog, impossible to grasp.”) This ambiguity often leads to a vagueness in the writing. McCormack’s prose is excellent when her eye is trained on sharp, physical realities, as when Leah is describing the new girlfriend of her uncle: “In her fifties, her milky skin starting to break down, her nails ridged and yellow from smoking.” Granted, the imprecision in less tactile descriptions (“Even in her old age, this dog is gravely beautiful, in the animal-like way denied to people”) do add to the sense of Leah’s inability to grasp the realities of her past, her relationships, and the case she is investigating.

As vivid as McCormack’s characterization is, and as much as Leah Jarvis emerges as a compelling protagonist, certain key plot points come across murkily. Events can sometimes be vague, and not only the lightly documented war crimes that Leah is trying to solve: her own firing by her boss, Louis, is over what seems to be a relatively minor offense, one that I had to flip back and reread the text to understand, particularly as the latter dives into a flashback chapter immediately after she loses her job. When Leah is re-hired, the reasoning is similarly skimmed over: these moments in the text should have been given greater weight.

The affidavits that Leah studies contain some of McCormack’s most vivid writing, in the form of spare, matter-of-fact accounts of torture and death dispensed by the NKVD: incidents that Drozd may or may not have partaken in. In the face of the evil she encounters in the affidavits, Leah asks questions. Rhetorical ones, perhaps too many. Her constant uncertainty and sense of being lost in her family and career are effectively drawn out by McCormack in more dynamic ways throughout the novel, and the questions that are spelled out in the text are often ones that her narrative has led the reader to pose to themselves already. “What does a war criminal look like?” “Do they see too much, the traces of jobs to pay for school still clinging to her?” “The value of justice, the meaning of justice. Do these things diminish over time?” The technique begins to grate as the question marks accumulate across the scope of the novel.

McCormack excels in the sympathetic yet unsentimental scenes set in the youth of the book’s potential monster, Stefan Drozd. These sequences begin in a distinctly unidyllic countryside childhood, in a beautifully written scene of a pig being slaughtered and the almost incidental sadistic thoughts of the man doing the killing. The chapters on Drozd’s past feel like a novella nested within the greater narrative, one that the reader is excited to return to. The dialogue occasionally lets down the rest of McCormack’s prose here, evoking awkwardly translated subtitles: “Get up, screams his father. You miserable piece of goat dung. You are too stupid. You will never learn to read. And what good is it, anyway?” McCormack’s reconstruction of this moment in history and the activities of the NKVD in Poland have both authority and compelling storytelling, though the question of how a man can turn to evil is sometimes answered with a cliché: “In this haze of death, he has never felt more alive.”