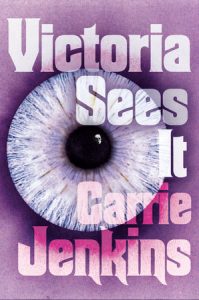 Carrie Jenkins—Cambridge-educated Canada Research Chair in Philosophy and author of three previous books on knowledge of arithmetic, the nature of love, and Plato—has written an uncomfortable, and tragically heartless first novel. Fiction’s standard niceties—scenic verisimilitude, objective description, order, meaning, time—are toyed with, or discarded entirely. Instead, Jenkins charts a bitterly subjective and postmodern path through questions of meaning and reality: a self-contradicting and inconclusive mystery novel, a bildungs-roman built on a downward spiral.

The titular Victoria is a pretty, orphan-adjacent genius (think Beth Harmon at Hogwarts) with next to no money and “medically interest-ing” intestinal tribulations. She’s at Cambridge because of her off-the-charts math and English scores, but this is not a sympathetic account of a Special Poor inducted into the mysteries of blithe wealth and moribund history (bedders, courts, tutors, follies). Likewise, Victoria is not the generous kind of genius who supplies readers with prêt-à-porter conversational trinkets re: metaphysics, though she does make gestures to her heady work:

The College clock strikes the hour twice, you know. Perhaps it must: once to pass the time, once to let us know the time has passed. Metaphysics and epistemology. Very important not to let them shade into each other, to confuse what is real with what we know.

Instead, she’s the kind of genius who, when invited to join a two-hundred-year-old secret discussion society (members: Wittgenstein, Keynes, the male members of the Bloomsbury Group), ignores the humans in the room so she can evaluate the décor and calculate the calories in the sideboard snacks. “This is how genius works,” Victoria tells us. It’s an optical illusion generated by the way our brains process contrast.” She also quotes Sherlock Holmes: “It’s not what you can do, but what you make people believe you can do.”

Victoria seethes iconoclastically along until she makes her first and only friend: Deb, an innocently raucous, old-money blonde who wears pearls and pink cashmere to the exclusion of all else. “She annoyed me,” says Victoria, “I hated her voice.” But in short order, Deb and Victoria have “made sense for each other, for ourselves, […] It was joyous” and Victoria is spending her last penny on a sweater for Deb’s birthday. (It’s blue, so Deb never wears it.) When Deb disappears, Victoria doesn’t search for her so much as spend the rest of her life trying to figure out whether she existed.

The problem with this mystery, for both Victoria and the reader, is best expressed in the line Victoria quotes from Murder on the Orient Express: “Has it occurred to you that there are too many clues in this room?” Victoria sees and records all of them, piling up notebooks of evidence. All the while, she’s earning top marks on “questions so huge they could not possibly matter, nor have any possible connection to anything that did,” and setting the course for her miserable career as a star academic, which occupies the book’s later sections.

Tonally, Victoria operates within a span of jaded to sneering (interleaved with abstruse rage from the unnamed second narrator, who appears between chapters). And while most of the novel details a “vicious regress,” Victoria’s complexity of language and thought evolves pleasingly from youth (on her and Deb’s favourite lecturer: “He was interested in all kinds of things, so he went off on tangents that were interesting”) to maturity (on the wine said lecturer buys her, twenty years later at a conference in Paris, before he date-rapes her: “This faceless juice-stone struck me as good for an orison.”)

Still, alone and friendless in her career, Victoria descends into a cluttered, intertextual, stream-of-consciousness labyrinth: “I was a flimsy collection of dust particles glued together with a mishmash of borrowed character arcs.” Her frantic and increasingly medicated aversion to the finality of interpretation—the intellect’s digestion of language, of symbols, of what a cloud looks like—is relieved by the occasional bell peal of extraordinary novelistic coincidence: deliberate plot contrivances that are both satisfying and disappointing both. Victoria is aware that she is blinded—with increasing frustration—from seeing something “crucial” which could settle all her clues into a safe, linear story. Jenkins—generously, or annoyingly, depending on the reader—chooses to leave us in much the same position.

As far as interpretation goes, my choice was to look back to the chapters when Victoria’s search was abetted by a local policewoman named Julie, who spends six months feeding, cuddling, and humouring her. She keeps her ear open for leads, and drives Victoria around the countryside to locations where amnesiac girls or their corpses have been discovered. Julie quietly adores her, the stolid Watson to Victoria’s Holmes. For her part, Victoria reduces this woman—perhaps the book’s only source of mercy and kindness, and therefore its only source of heartbreak—to a flat caricature, which she appreciates, in her own way:

The reason we prefer fiction to reality is that fictional characters make sense. They have focus, things they want, and they don’t waste your time. The Cop was like that. […] The Cop made everything really clear. It is such a relief when people do this. I don’t know why we can’t do it all the time.